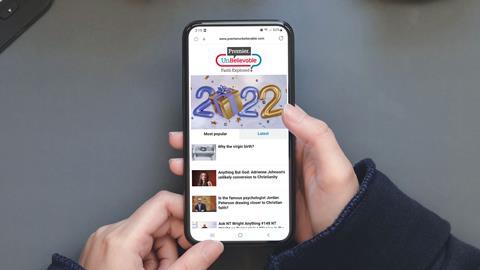 Justin Brierley rounds up the most popular shows of the year

Another year brought another set of 52 weekly shows from Unbelievable? (or 104 if you include our midweek Classic Replays!), with 4.9 million downloads of our podcast and 4.7 million views of our YouTube channel.

Once again, I’ve had the privilege of sitting down with a huge variety of Christians and non-Christians to talk through key issues of faith, culture, science and history.

Unsurprisingly, four episodes of our Big Conversation series feature in this year’s top ten - our fourth season of the special series from Unbelievable? produced in partnership with John Templeton Foundation. It includes our most popular show for the year on both video and podcast - Francis Collins and Richard Dawkins debating faith, science and God.

If you missed any of these I hope you get the chance to catch up on some of them over the Christmas break and feel free to tell me what you’d like to see on the show in 2023 - just email unbelievable@premier.org.uk.

Just before we get to the top 10 (and one of my personal favourites too), if you like Unbelievable? you’ll probably also love our other podcasts: Ask NT Wright Anything, Unapologetic, The CS Lewis Podcast and Matters of Life and Death. Why not subscribe to one of them for the new year and enjoy more “conversations that matter”?

Richard Dawkins is emeritus professor of the Public Understanding of Science at Oxford University and author of the best-selling atheist book ‘The God Delusion’. Francis Collins is the former head of the Human Genome Project and National Institutes of Health, currently serving as science advisor to the President and author of ‘The Language of God: A scientist presents evidence for belief’.

They discussed their journeys towards and away from faith, Covid, genetics, evolution, the origin of the universe, evil, morality and God in a wide ranging conversation that kicked off season four of The Big Conversation.

Vladimir Putin’s invasion of Ukraine is more than just a geo-political conflict. The Russian leader believes in the spiritual destiny of a\ united ‘Holy Rus’ that goes back to the conversion of Vladimir the Great in 984.

Ukrainian Orthodox scholar Fr Cyril Hovorun and Catholic journalist Clifford Longley discuss how the history of the Eastern Orthodox Church plays into the conflict and what can be done.

Should such a law be welcomed by churches as a protection for LGBT+ people, or a cause for concern at the potential criminalisation of prayer?

Peter Lynas of the UK Evangelical Alliance and Jayne Ozanne of the Ban Conversion Therapy coalition debated the proposed legislation.

5. Is there historical evidence for the bodily resurrection of Jesus? Justin Bass & Dale Allison

At Easter, New Testament scholars Dale Allison and Justin Bass discussed their different approaches to the evidence for Jesus’ resurrection.

6. Bart Ehrman v Glen Scrivener: Did Christianity give us our belief in equality, compassion & consent?

Glen Scrivener’s book ‘The Air We Breathe: How We All Came to Believe in Freedom, Kindness, Progress & Equality’ makes the case that our belief in modern human rights and values are a direct product of the Christian story that shaped the West.

New Testament critic Bart Ehrman, whose own book ‘The Triumph of Christianity’ tells the story of how the faith swept the world, responds to Glen’s view that our embrace of equality, compassion and sexual consent are uniquely Christian.

Theologian Randal Rauser defends ‘progressive’ Christians such as Rob Bell, Richard Rohr and Brian Mclaren, against ‘heresy hunters’ in his new book ‘Progressive Christians Love Jesus Too’ a response to Alisa Childers’ book ‘Another Gospel?’. Christian philosopher and apologist Douglas Groothuis explains why he thinks some progressive Christians are outside the bounds of orthodoxy and shares Childers’ concerns about their influence.

What does the science of brain chemistry and consciousness tell us about the nature of our mind and our cosmos?

Recorded live at The British Library London as part of The Big Conversation, leading psychiatrist and philosopher Dr Iain McGilchrist, author of the influential books ‘The Master and his Emissary’ and ‘The Matter With Things’ engages with Christian neuroscientist Dr Sharon Dirckx author of ‘Am I Just My Brain?’. They discuss brain science, consciousness and God.

In this Big Conversation edition of the show, Paul and Rowan talk about the spiritual longings that still exist under the surface of secular culture and whether ancient forms of Christianity may provide answers to today’s generation.

Almost half of Millenials and Gen Z in the USA identify as ‘nones’ (having no religious affiliation). Mikhaila Peterson, who runs a popular Youtube channel and podcast, talks about her own recent journey to faith along with the journey of her father, renowned psychologist Jordan Peterson.

Jon McCray who runs ‘Whaddo You Meme’ a popular Youtube channel responding to internet atheism and popular culture joins the conversation as he and Mikhaila talk about the spiritual search among Gen Z and Millennials and take questions from the live audience that joined in online. This episode concluded our Big Conversation series of 2022.

And finally…my personal selection of the year…

It may not have quite made the top ten but this significant show saw me joined by four guests and hundreds of attendees for a live webinar discussing the Church abuse scandals that have dogged the evangelical Church in recent years. The excellent contributions of the panellists helped our audience to consider how we can support survivors and make sure the Church looks more like Christ in the future.

Thanks for watching and listening to all our shows this past year and let me know what you’d like to see in 2023!