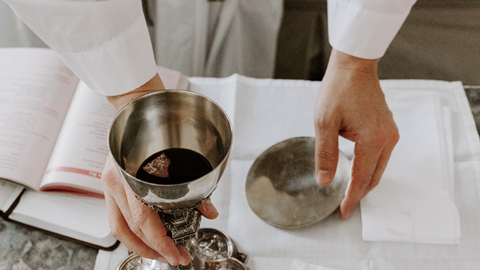 My Eucharistmas: A personal memoir on Holy Communion during the festive period

I have often wondered what Holy Communion is and what I’m supposed to be thinking when I go up there to receive it. No more is this the case than in Advent, a time of looking forward. But looking forward to what exactly? I have sat through plenty of sermons that have centred on the coming of Christ during the period of Advent, but I’m struck by the force required to put the focus on the resurrection and not, dare I say, merely the incarnation.

Taking communion during this time of anticipation has an impact on the posture and outlook with which one receives. I have noticed that the essence of this feeling is shared by a number of people I have spoken to recently, both layman and theologian alike.

Living in a city like Oxford means there are far too many churches to choose from. I have somehow left my Pentecostal upbringing and moved to a High-Church Anglo-Catholic joint, for reasons that have less to do with theology and more to do with the aesthetic pull of an 11am start. It is possibly this move, albeit for the wrong reasons, that has made me more acutely aware of the liturgical calendar and the way the seasons elongate and compress certain emotions that were formerly attached to sacramental practices.

To illustrate what I’m talking about, and God knows I need help articulating these peculiar intuitions, let’s turn to one of the carol services I attended this Advent. I was sitting in church in early December as the light was drawing in, candles lit, looking up and noticing the darkening of the cross, Jesus’ face, as with Mary’s. As if during this period of Advent, we are asked to forget about the cross and just wait. It was an odd feeling.

It was also the first time I had been to a service there and hadn’t received communion. This, in itself, isn’t unusual in a carol service but it made me question its significance. The next day was the Sunday service. I was struck by the contrast. The light streaking through the incense mist, the choir behind us humming as they do. And then, communion. It was beautiful, but it also felt slightly odd. I suppose when I’m sitting or kneeling and receiving the goblet, what goes through my mind is the importance of the first time this peculiar act was done. This means I’m thinking about that particular passover night and primarily focussed on the cross. This, of course, is the still point at the centre of the Christian faith and I would never wish to say anything that might dissuade that thought entering into anyone’s head during Holy Communion.

However, something inside me felt that there is a kind of dissonance taking place here during Advent that isn’t present at any other time of the year. It is as if we are skipping forward past the incarnation and looking towards the resurrection. I’m not suggesting that there is a problem at the heart of the Christian faith, quite the opposite. The heart of the Christian faith is something like “God is made man, who dies and is resurrected”.

Perhaps my intuition is that the miracle of Christmas is in the first part and communion is looking at the second. This too, appears reductive in any theological sense, but I am concerned with articulating an intuition and not with constructing a novel theology. There is something about this period of drawing in, where the light is diminishing, the frost is biting and we are called to evening services under candlelight. There is a quiet hope in the background of our hearts. It warms us to think about God becoming man, but then the contrast of the cross floods in. It should make sense and it probably does, but that doesn’t change the feeling of unease.

I suppose this then makes me question how often we should take Holy Communion. I recall speaking to a bishop and theologian a number of months ago and the conversation turned to communion frequency. He gave a very diplomatic response and described the benefits of a daily, then a weekly, a sporadic monthly-ish approach, to a yearly consumption. This last one sounded interesting so I enquired further. Apparently, there are a series of churches in Scotland he had visited years ago who turn what is commonly a weekly event into an annual celebration. He noted its comparison to Burns Night celebrations in its magnitude and reverential attitude towards it. I quite liked hearing about the differences and that maybe it isn’t about any individual practice but rather a certain sensibility towards something important.

What seems to be at the heart of what I’m getting at here is that Holy Communion feels as if it’s undercutting its significance when it is taken during the period of Advent. Naturally, any kind of undercutting of sacramental practices should be best avoided. My purpose here was to take the reader through my chaotic mind, to question my knee-jerk uncertain unease. If you have read this far and think I have committed heresy, or perhaps my intuition is just not shared with you, I’m sorry for wasting your time. However if you’re like me, hopefully you have resonated with a feeling that I can’t quite find the answer to, but somehow feel reassured by the uncertainty.

“And the light shineth in darkness; and the darkness comprehended it not.” John 1:5 (KJV)

Jonathan Garner is a philosophy and theology student who has a keen interest in the poetry of the Hebrew Bible.