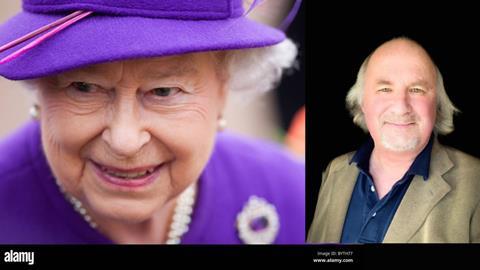 Gavin Ashenden was appointed chaplain to the Queen from 2008 until 2017. He shares his thoughts about Elizabeth II’s faith, role and character.

In a recent episode of Unbelievable? Justin Brierley spoke to Gavin Ashenden, former Chaplain to the Queen. For more of his reflections on the significance of Queen Elizabeth II’s death to the Church and the country, and to read about his belief that King Charles’ reign may catalyse the end of the monarchy, click here.

Justin Brierley: Tell us a bit about your personal knowledge of the Queen. What did your role involve? Were you able to be in her presence from time to time?

Gavin Ashenden: Well, this is both quite complex and simple. The simple bit is that anything personal that passes between you, you don’t say anything about because the conditions of having a relationship with a queen are discretion, particularly as a priest, as I then was. But the public role is quite interesting. The idea of royal chaplains goes back to Agincourt and beyond. So, when the country was Catholic, the monarch travelled around with a whole load of priests to celebrate mass in every circumstance. And when the country became Protestant, it was hard to know what to do with all these priests. So, they were formed into a royal ecclesiastical household and invited to preach one after the other in St. James’s Palace. So it’s a bit like a rolling band, you know, we’re there for the gig wherever it is. But the gig is now permanently placed at St James’s Palace. So, in the last few hundred years, it’s really been a preaching role.

During that time, yes, I got to know her. And as it happened, my father was an officer alongside Prince Philip in the North Sea convoys and they knew each other quite well. So there were always things to talk about when the wine was running low and the finger buffet wasn’t being replenished as fast as we might hope! Royal chaplains do get invited to places, so you’re at the garden party or receptions at Windsor Castle. The most exciting thing that I did there was when I mistook Sophie Wessex for a cocktail waitress! That was one of my more enjoyable moments. She was very good. She played the thing along right to the end.

Obviously, without divulging any personal confidences, when you were able to talk with the Queen was she willing to talk about faith quite openly?

And I think one of the reasons why the Queen commends herself to people so much is that she took this role – this is her persona, her mask and behind the mask is Elizabeth Windsor. But as it happened, the real Elizabeth Windsor permeated the mask with such integrity and such loveliness, that there was a sense of authenticity in everything she did. So, although she had to act a role, the very acting of it had such integrity that it was as if she wasn’t acting. There was no gap between who she was and the way she portrayed herself.

It’s been well documented the fact that the Queen had a very deep and meaningful Christian faith that stood her through thick and thin over many years. Do you happen to know where that faith came from?

Once upon a time I was in a clergy meeting where we all shared our favourite verses. And a colleague said that his favourite verse was: “He who endures to the end shall be saved.” And I thought: “This is very undramatic. I can find better ones than that.” As time has gone on, I think he was right. It’s a very good verse. And I think in a way, it partly explains the question you’re asking about the Queen. So, we have the ingredients of her own journey, some of which are that she was brought up to pray, brought up to believe by believing parents, and then she practised her faith and articulated it.

And then there were times when her faith came under enormous pressure, for example, the death of Diana when, for a moment the monarchy hung in the balance as a concept. And like so many others, her children didn’t behave in ways that she had brought them up to or wanted to or prayed for them. In other words, as she continued on the pilgrimage and practised her faith, so faith grew, and if you like, the legalistic cosmetic or external handholds that were built in because she was defender of the faith and Supreme Governor of the Church of England were infused by her own praying, as with us all, for all those who pray through the days find their faith being deepened. And I think that’s what happened with her. 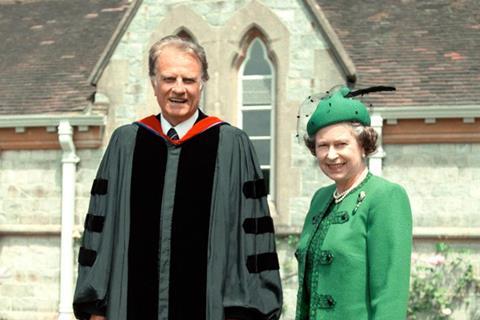 Interestingly enough, we know that Billy Graham had a profound effect on her and I think, if we were able to tell the story, and I think probably the soap opera drama The Crown does and so do some of the books written about her, I think we’d find that that was a real catalyst. I mean, the poor woman, of course, had so many sermons preached to her by well-meaning Anglicans! If only being preached to by Royal chaplains and other well-meaning dignitaries was responsible for the holiness that I think emerged in her life, we could be proud, but I think probably they weren’t responsible. But this holding on to her love of God and her sense of her own vocation, through thick and thin, and the more faithful we are to God, the more we experience His faithfulness to us. And I think that may have been a way of describing her own journey.

The place so many people encountered The Queen from year to year was in her Christmas messages, which for me have, especially in the last couple of decades, been more and more open about her Christian faith. And despite the pluralistic and often secular society we live in, she hasn’t been afraid to still speak of Jesus in that context…

I have this sort of imagined day of judgement for the Queen. Jesus will be standing there saying: “Well, I gave you an awful lot to do and in difficult circumstances where you weren’t able to express yourself because you were hidebound by the role (and this was a great constraint in her - death to the self). Those moments that you took to talk about me were filled with such reality and such love and joy and authenticity. Well done. You know, that was that was high octane stuff.”

And I think those of us who believe and who know and have a taste for these things know very well that she put her heart and her soul into this quite difficult balancing act where we have one moment during the year, she was allowed to join the public and the private. And she did it with such expertise.

As a clergyman, when you come to the midnight mass, and it’s John: “In the beginning was the Word and the Word was God” and you think: “What am I going to say this year that I didn’t say the year before, and 20 years before that?” Well, she had the same problem. She had been doing Christmas messages for 70 years. And yet to parallel the very best clergy, she pulled a humdinger out every time and just increasingly so. So again, those with the eyes to see it and ears to hear knew that they were in the presence of someone who was being faithful to Jesus, who was living it out and using this opportunity with subtlety and courage to express it publicly.

For those who aren’t familiar with the structures of the Church of England and exactly what role the Queen has in the state church, could you explain what her role of Defender of the Faith and Governor of the Church and so on actually entails?

So much that’s to do with our English constitution is cosmetic flummery. It doesn’t mean very much to look underneath it. And that’s not to denigrate it, it’s simply to say that there’s always a difficulty between marrying appearances and reality. And there are some aspects of our culture which look jolly nice. And the reality never gets married up to it, but they look nice enough, so we keep them. So, the Queen has absolutely no right to be called defender of the faith. I’m a Catholic, I’m quite cross about it, because, in fact, Henry VIII in one of his better, more faithful moments, before he became a despotic psychotic tyrant, put his back to the church’s task in order to give Luther a thick ear! He explained to Luther [in a letter] where he was wrong and he did it because he was a good theologian. I mean, in his early years, before he decayed horrendously, both in body, mind and soul, Henry VIII was really quite a lad!

This was a fairly good piece of theological writing and so the Pope, pleased that one of his better Christian monarchs had come to the defence of the Catholic Church, bestowed upon him this Catholic title “Defender of the Catholic faith”, but at no point does any of this not become Catholic! And so, the cheek of the Protestant monarchs, if I can put it that way, to appropriate this Catholic title and say: “Yay, not only have we not done this, but we’re not even Catholics, but we’re still going to wear the badge.” It’s nonsense! It’s cheekiness. Flummery, but we know where it came from and it looks good on the coins!

“Supreme Governor of the Church” isn’t much better. Because one of the things that happened after Henry VIII was that the monarchs’ hands were firmly tied in almost every respect. And the phrase “constitutional monarchy” means you’re up there on the cake looking pretty, but you can’t do very much. And that includes being Supreme Governor of the Church. It’s a title, without any gearing, there is nothing that the monarch can do to, for or in the church beyond rubber stamping. So at one level, you may say: “Well, this makes it meaningless and facile, irrelevant and empty.” And you might say: “Well, yes. All right.” But if you’re going to run an organisation, you might as well use the hierarchy to best effect, and you have somebody slightly mystically and magically infused at the top of the thing, why not use them? And so the monarch becomes Supreme Governor of the Church, but only in the sense of a rubber stamp.

The people who have the power - this is the same with the Prime Minister - the people who have the power exercise it in the monarch’s name. They can’t exercise it in their own name. And so, to some extent, the role of the monarch is to act as a kind of ideological constraint to the powerbrokers. And that’s not a bad thing. In that sense it is no longer empty. So it’s rich in an implicit way, but it doesn’t have the function of purpose, it appears to have.

Watch Justin Brierley’s interview with Gavin Ashenden here or listen to the whole episode of Unbelievable? here, including reflections on the Queen from NT Wright and Ruth Jackson.