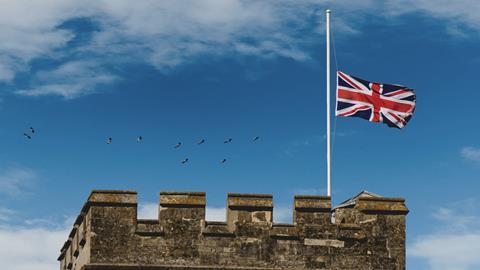 Gavin Ashenden was appointed chaplain to the Queen from 2008 until 2017. He shares his thoughts about the significance of Queen Elizabeth II’s death to our national culture and why he believes it may spell the end of the British monarchy.

In a recent episode of Unbelievable? Justin Brierley spoke to Gavin Ashenden, former Chaplain to the Queen. Here, he reflects on what the death of Queen Elizabeth II means for the future of the monarchy and Christendom as a whole. For more of his reflections on the Queen’s faith, role and character, as well as some personal reflections on his time as chaplain, see our additional article here.

Justin Brierley: In the 70 years of her reign, the Queen oversaw a country in a culture that has changed drastically, a culture that, in many regards, has become very post-Christian. What do you think she made of that?

Gavin Ashenden: This is an act of pure personal psychological projection and nothing else. I’m a generation younger than the Queen, but I’ve grown up and lived during the very period you’re describing. And it’s quite clear to me that I was born into a Christian culture, infused with Greek classical stoicism to some extent, with all the aftershocks of the Second World War. I think back now to the masters who taught me at prep school, and I think: “You poor blighters, you had gone through prison camp, post-traumatic stress disorder. There you were functioning, you know, not usually well, but no one knew what you went through” and no one ever talked about it in the 50s and 60s. But during the course of my lifetime, we’ve moved from an objective Christian stoical culture to a subjective, relativistic, hedonistic one where Christian virtues have been washed away and are hanging on by the skin of their teeth.

When I get on my knees at night and say to the Lord: “Look, I fought really quite hard as a born-again charismatic Catholic Christian for the kingdom of heaven over the last 68 years. And to tell you the truth, Lord, there’s nothing to show for this.” Actually, there is, you know, a lot of people have become Christians. But in terms of rolling back this terrible cultural tide, I have to say: “Lord, I put my shoulder to the wheel. But they rolled me back along with my Christian friends.” And one can either feel - and I think the Queen may feel this too - responsible and a bit of a failure. What will future generations think of us? We really failed to defend Christendom when it was our turn at the watch.

The Queen smelt of God

I think the task that we’ve had was completely impossible. There’s no way Christendom was going to survive this onslaught, and what we were called to was to bear witness as bravely and as courageously as we could, as the light fell. And I think the Queen’s done that. She stood in the breach in the public space. You mustn’t take her smiling, her courage, her gaiety and her sense of humour for granted. These are the fruit of moral virtues. In evangelical terms, this is the fruit of the Spirit. In Catholic terms, this is the fruit of moral virtue. She loves Jesus and she’s been faithful to God. The reason you like her is because you can smell God in her. And that’s why I think she’s done the most wonderful job.

What I want to do is to help people join the dots and say: “You’ve got this queen, a good queen, who did a good job in a Christian context, because she was a Christian, and what you’re seeing is the Holy Spirit at work in her life.” Now, all you can see is a rather cheerful, impish elderly lady who likes horses and seems to have a good word for everybody. But you must look beyond, if you like, the extrovert facade and see that coming through the mask, coming through the persona, coming through the system and the Constitution is a very lively Christian lady who brings all the holiness that being close to Jesus produces to the role and that’s why you like her.

The end of the monarchy?

Justin Brierley: Do you have any views on how King Charles will carry the monarchy forward? What’s your sense of where the future lies in terms of that kind of leadership at a spiritual level?

Gavin Ashenden: Well, Charles has been trying to exercise leadership the whole of his life and you have to give him credit for putting his back into it: his ‘black spider’ memos, his relationships with people, the Prince’s Trust, which I think is one of the most unsung virtuous projects that we’ve had in our society, are examples of that. And he ought to be given maximum credit for it. But the difficult bit starts now, because this is the point when he becomes a prisoner of the system. Charles in particular is going to find it very difficult to be a prisoner of the system. And the system, I’m afraid, is not hospitable. It contains within it elements of contradiction that will almost certainly break it.

So, I don’t think the monarchy is going to survive very long. I’m not sure how long our culture and our civilization is going to survive in a recognisably present form. I think people will talk about the second Elizabethan age as bringing down the curtain on everything that we knew up to this point, because in the public sphere now there are other competitive voices asking to play a role, and to have a voice and traction. And the two obvious ones are secularists, materialism, atheism, the kind of Dawkins effect, if you like, which has coloured a whole generation of young people. And however brave Christian apologists have been – and many of us, again, have been putting our backs into it as acutely as we can – nonetheless, there’s been a seed change, at least through education, in favour of secular materialism, which is actually pretty ignorant and under informed, but effective nonetheless. And the other competitor, of course, is Islam.

Charles is going to preside over this. So, even at his coronation, both the secular materialists and Muslim communities are going to say: “If Charles is our king, our constitutional king, our civic king, surely he should represent us.” And then you have the impossible task of taking a profoundly Christian and prophetic fusion of Old and New Testament liturgy that the coronation represents, and writing into it two entirely alien and contradictory philosophical takes.

Now, in our relativistic society, and particularly with the influence of postmodernism, we could probably wear that and no one will notice or care. But, you cannot ride three horses at once, without having a moment when they will go in different directions. And poor Charles will have to be there in the constitutional seat, as these three horses begin to pull apart over the next ten years. And that’s going to be a very painful experience.

Hope for the future

Although this sounds slightly apocalyptic, if you ask me, in Christian and human terms, is this as disastrous as it sounds? I would say: “No, not at all.” I know Russia is a controversial place at the moment and we have to speak carefully for fear of upsetting people, but what has happened in Russia since 1989, is the most extraordinary vivification of Eastern Christianity. What is happening in China, with the bravest of Christians, both Protestant and Catholic, is mind blowing. What is happening in the fulcrum of Africa, where both Islam and Christianity and Western liberalism are in struggle, it looks as though it could be quite inspiring. It’s only where we are, that the glue has given way.

I think one of the things we do as Christians, we don’t see ourselves limited as citizens of a particular cultural country, we’re actually citizens of heaven. And so, first of all, what the Queen’s death does is it reminds us that we’re going to die very soon as well. And we hold our lives as gifts of God, and we have a responsibility to love Him and serve Him and we accept every day as it comes.

Secondly, what He does in this world, in the conflict between good and evil, is really up to the Lord. And all we do is we get on our knees and pray and say yes. And so, although the future of our culture looks to be exciting and dramatic and multi-coloured, that is only a moment colouring in time and space as we look at the whole history of the Church and we have confidence in a risen God who will rescue his people.

Adapted from an interview with Gavin Ashenden. Watch the full interview here or listen to the whole episode of Unbelievable? here, including reflections on the Queen from NT Wright and Ruth Jackson.