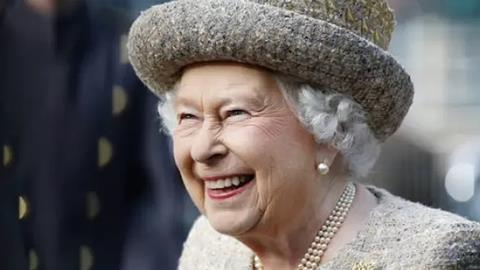 We mourn the Queen, but not as those without hope

On Thursday 8th September, Queen Elizabeth II, Britain’s longest-reigning monarch, died aged 96. Ruth Jackson reflects on what Jesus, the “bedrock” of the Queen’s faith has to say in the midst of our grief.

I was heartbroken when I heard the news of our Queen passing. As Rt Rev Jon Pritchard points out in Premier Christianity: “The loss of our Queen somehow feels very personal to most of us.” Even if we never had the privilege of meeting her, we all have memories of our nation’s servant sovereign and many of us will feel a profound sense of personal sadness as we mourn her death.

A time to weep

The world somehow feels different without our fearless leader. Britain’s former Prime Minister, Boris Johnson captured the sense of our collective grief when he named the 8th of September “our country’s saddest day”. And we know these waves of grief are not limited to just the UK.

Most Rev Justin Welby, Archbishop of Canterbury said: “It is with profound sadness that I join the nation, the Commonwealth and the world in mourning the death of Her Late Majesty The Queen. My prayers are with the King and the Royal Family. May God draw near them and comfort them in the days, weeks and months ahead.

“As we grieve together, we know that, in losing our beloved Queen, we have lost the person whose steadfast loyalty, service and humility has helped us make sense of who we are through decades of extraordinary change in our world, nation and society.”

Even in the hour or so after the announcement of the Queen’s passing I saw glimpses of this collective grief – muted conversations in my local newsagent, silence observed during a televised football game and tributes pouring in from around the world.

The Bible tells us that there is a time to weep (Ecclesiastes 3:4) and I know there will be many of us doing just that over the next few weeks.

When someone we love dies, we often find ourselves questioning the existence and character of a God who would allow this to happen. The Queen herself was no stranger to sorrow, but she took great hope from the life, death and resurrection of Jesus. In the final words of what was to be her last Christmas broadcast in 2021, Queen Elizabeth told the country that Jesus was the “bedrock of [her] faith”. So, it is to him that we turn to try and make sense of our collective grief.

One of the biblical verses often read at Christmas is John 1:14: “The Word became flesh and made his dwelling among us.” This is a pretty remarkable statement. The Word, God, doesn’t reside in a distant celestial palace removed from pain and contamination. In the person of Jesus, he chose to come into the mess of this world.

Recent years have brought many personal and corporate tragedies – a global pandemic, mounting living costs and a rise in mental health struggles to name but a few. One moment in April 2021 seemed to encapsulate the world’s heartbreak while revealing the inimitable character of our duty-devoted monarch. The world was moved to tears at the poignant image of the Queen sitting alone in St George’s chapel, Windsor mourning the loss of her best friend and husband of 73 years, Prince Philip.

The shortest verse in the Bible – “Jesus wept” (John 11:35) – felt more relevant than ever. One of his best friends died and Jesus’ response is exactly what ours would be – he wept.

The Bible also says that in the Garden of Gethsemane Jesus’s sweat was like drops of blood. He may have been suffering from a rare medical condition where the capillaries around the sweat glands rupture under extreme distress. Throughout his life Jesus appeared to suffer pain at every possible level: physical, psychological, spiritual.

While this by no means eliminates our own pain, the biblical picture shows us that whether we are encountering physical sickness, mental health struggles or spiritual doubt, Jesus has been there. Jesus not only knows about but has actually experienced the depth of human emotion.

In the Queen’s Christmas broadcast in 2000, she told the watching millions: “I, like so many of you, have drawn great comfort in difficult times from Christ’s words and example.” The weeping Christ who sweat blood reminds us that the Queen was not alone in her grief in that deserted pew and neither are we.

Jesus not only experienced every human emotion, he also faced the ultimate suffering, which we’re most afraid of, especially in this difficult time: death. Christians believe Jesus died on the cross, not just to identify with our suffering, but for a much bigger purpose – to save us from the mess we have made.

As Queen Elizabeth said in her 2011 Christmas speech: “Although we are capable of great acts of kindness, history teaches us that we sometimes need saving from ourselves – from our recklessness or our greed. God sent into the world a unique person – neither a philosopher nor a general (important though they are) – but a Saviour, with the power to forgive.”

Christians talk about being forgiven or saved from their ‘sin’, which may be considered a rather archaic word, now often synonymous with indulgent chocolates or skimpy underwear. However, the original Greek word for sin had its origins in archery. To ‘sin’ means to miss the bullseye. And if the bullseye is perfection, it’s pretty clear we’ve all missed the mark, we’ve all ‘sinned’. Being saved from this sin comes at a great cost, because all forgiveness costs something.

Imagine Prince William had learnt to drive using his grandmother’s Land Rover and irreparably broke the car. The Queen would have been faced with two choices: to make William pay for another car or to forgive her grandson. If she chose to forgive William, the Queen would have a broken car and would need pay for a new one from her own pocket. Likewise, when God forgives us for messing up, there is still a cost that needs to be paid. Someone had to pay for us rebelling and for the mess that consequently came into the world. Christians believe that at the cross, Jesus took all of that on himself (Isaiah 53) and paid the ultimate cost: his life.

Jesus thought the world was worth dying for. He willingly chose a horribly painful death to pay the price for our brokenness and to show us how much he loves us. As the Queen’s 2013 Christmas broadcast put it: “The Christmas message shows us that this love is for everyone. There is no one beyond its reach.”

In the midst of the Coronavirus pandemic in April 2020, there was a special Easter transmission from the Queen. She told the nation: “We need Easter as much as ever.” Referencing the tradition of lighting candles to mark the occasion, she said: “As dark as death can be - particularly for those suffering with grief - light and life are greater.”

This message couldn’t be more relevant in the midst of our current pain at her loss. We can take comfort from the nail-scarred God who comes to meet us in our pain. Good Friday’s cross reassures us that we do not struggle alone, while Easter’s empty tomb reminds us that brokenness is not the end of the Christian story.

Like the Queen herself did during her lifetime, we grieve as those who have hope (1 Thessalonians 4:13). Revelation 21:4 epitomises this future hope: “God shall wipe away all tears from their eyes; and there shall be no more death, neither sorrow, nor crying, neither shall there be any more pain: for the former things are passed away.” The God who weeps is portrayed here as so tender that his own hand will wipe the tears from our eyes.

Yet I dare to hope

In her 2002 Christmas address the Queen said: “I know just how much I rely on my faith to guide me through the good times and the bad. Each day is a new beginning. I know that the only way to live my life is to try to do what is right, to take the long view, to give of my best in all that the day brings, and to put my trust in God…I draw strength from the message of hope in the Christian gospel.”

Her message reminds me of a passage in Lamentations, one of the most miserable books of the Bible. However, after listing numerous painful experiences, the author speaks boldly about hope, declaring that loss does not have the final word (Lamentations 3:21-23): “Yet I dare to hope when I remember this: The faithful love of the Lord never ends. His mercies never cease. Great is his faithfulness; his mercies begin afresh each morning.”

Images of rainbows over London and Windsor castle seemed to dominate my social media feeds as the sad news of the Queen’s passing was announced. These rainbows provided glimpses of respite from rainy weather and served as a reminder that in the midst of our suffering we can be profoundly comforted by a loving God who promises to draw close and bring overwhelming hope even in our darkest moments. 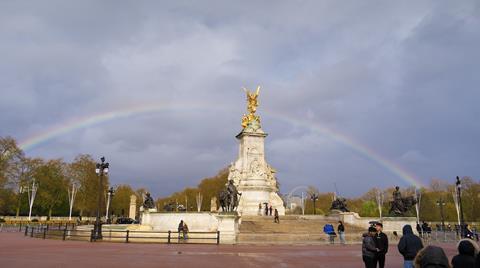 I, like the rest of the world, am deeply grieving the loss of Britain’s longest-reigning monarch, but I am also profoundly grateful for this great matriarch’s legacy, example and leadership. As Cardinal Vincent Nichols, Archbishop of Westminster and President of the Catholic Bishops’ Conference of England and Wales pointed out: “On 21 April 1947, on her twenty-first birthday, Princess Elizabeth said, ‘I declare before you all that my whole life whether it be long or short shall be devoted to your service.’

“Now, seventy-five years later, we are heartbroken in our loss at her death, and so full of admiration for the unfailing way in which she fulfilled that declaration.

“Even in my sorrow, shared with so many around the world, I am filled with an immense sense of gratitude for the gift to the world that has been the life of Queen Elizabeth II.

When the news footage of the Queen’s passing flooded my television screen, I was moved to tears by my one-year-old waving at the Queen and whispering: “Bye bye.” As we enter into a period of national mourning and remembrance, this is a “bye bye” of sorts, but it is not forever. As Christians we believe we will see our beloved Queen again when she is reunited with her earthly prince and our heavenly King in a place where all pain is gone forever.

May Her Late Majesty Queen Elizabeth II rest in peace and rise in glory.

Ruth Jackson is a producer and youth specialist for Premier Christian Radio’s Unbelievable? radio programme and podcast and host of The C.S. Lewis Podcast with Professor Alister McGrath.