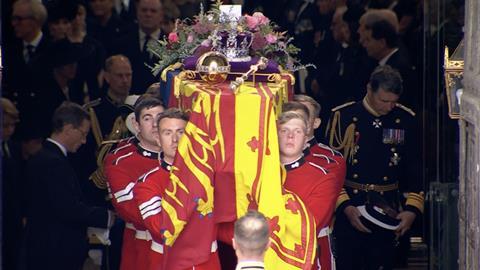 Atheist says Queen’s funeral was ‘empty and platitudinous’. I disagree.

On Monday 19th September I gathered with a small group of family and friends to watch the funeral of Queen Elizabeth II. We were not alone—almost four billion people globally watched the service from Westminster Abbey.

I found the funeral profoundly moving but although there was sadness, the service was not in the slightest way depressing, for the Queen’s funeral was deeply and thoroughly Christian, saturated throughout with a message of joy and hope, the good news that for the follower of Jesus, death is not the end. As the final hymn that the Queen herself had chosen proclaimed:

Finish then thy new creation,

pure and spotless let us be;

let us see thy great salvation,

changed from glory into glory

till in heaven we take our place,

till we cast our crowns before thee,

lost in wonder, love, and praise!

Not everybody was so impressed by that message of hope in the face of death. Whilst the funeral was still in progress, journalist and broadcaster Ian Dunt tweeted:

I'm glad religion brings solace to those who are suffering at funerals. But throughout my life I've always wondered how. It's all so terribly empty and platitudinous, a cardboard shield against existential despair.

The first thing that struck me about Ian’s comment was his honesty. There can sometimes be a tendency for atheists to pretend that life is all rainbows, roses and kittens—think of that terrible bus slogan from a few years ago: “There’s probably no god: now stop worrying and enjoy your life.” Now there’s a platitude with attitude. But Ian is at least honest enough to recognise that suffering and despair are a grim reality of life.

Other atheists go further still. In his best-selling book, Sapiens: A Brief History of Humankind, Yuval Noah Harari writes: “Any meaning that people ascribe to their lives is just a delusion.”

For Harari, it’s not just religious people who try to fend off existential despair with falsehoods, but everybody. Life is meaningless, period—and so Dunt is guilty of not going far enough. Quick to criticise the “cardboard shield” of religion, he hopes you won’t notice his own paper cocktail umbrella of comfort.

The second thing I noticed about Ian’s tweet was his criticism that religion is “terribly empty and platitudinous”. Aside from the point that in atheism, everything humans do is ultimately empty, I’d again go further than Ian and observe that all of us can be tempted to shallowness. For every Christian who doesn’t get beyond tweeting “Jesus is the answer”, there are at least as many atheists who mindlessly parrot soundbites like “faith is irrational”. Perhaps the world might be more a civil place if we were all a bit more robust in our thinking.

And Biblical faith certainly is robust. It’s easy to forget that much of the Bible was written by people who were suffering, who knew full well that the world was a messy and broken place, for whom despair was an ever-present temptation. And throughout two thousand years of Christian history, biblical faith has been battle-tested as Christians have discovered that faith in Jesus does provide solace when one is faced with war, disease, persecution, or death. I wonder if Ian needs to get out a bit more and talk to Christians in places like Iran, or China, or North Korea.

We’re all going to die

But let’s return to Ian’s remark about “existential despair”. Given all that’s going on in the world right now (pandemics, Putin and financial chaos) and the grim fact that death awaits all of us, what should we do? You basically have three options. First, you could just give up—indeed the famous French atheist Albert Camus once remarked: “There is but one truly serious philosophical problem and that is suicide.”

If that seems a bit extreme, option two is to distract yourself. There’s an old Indian folktale about a man stuck on a raft that is approaching a huge waterfall that will almost certainly kill him. After trying to rescue himself by paddling (but the current is too strong and the river too wide), he decides to lie back, put his arms behind his head and whistle away the minutes until his doom. We can do the same: try to use TV, or music, or sex, or some other pleasure to distract us from our impending doom.

If neither killing yourself nor distracting yourself sound particularly promising, maybe it’s time to consider option three and give religion a proper look. After all, if there is a god behind the universe (not merely the blind forces of time, chance and physics) that would give us a proper basis for human value, for meaning, and perhaps offer the possibility that death is not the end (along the way explaining our instinct to see death as unnatural and something to rage against).

Queen Elizabeth was not simply ‘religious’, nor was her faith in some generic wishy-washy god with a lower case ‘g’. Rather she trusted in the God of the Bible, a God who stepped into history in the person of Jesus. In the New Testament, Peter, one of Jesus’s closest friends and followers, writing to a group of Christians being persecuted for their faith, says this:

“Praise be to the God and Father of our Lord Jesus Christ! In his great mercy he has given us new birth into a living hope through the resurrection of Jesus Christ from the dead, and into an inheritance that can never perish, spoil or fade.”

The living hope that Christians have, says Peter, is not empty or platitudinous, not based on wishful thinking but is grounded on the resurrection of Jesus from the dead—an event that took place in the full light of history (and to which Peter was one of the earliest group of eyewitnesses). Yes, life may be tough, says Peter, but we know that there is hope to be found for those, like the Queen, who place their trust in Jesus, the one who has overcome death and decay.

One of the hallmarks of Queen Elizabeth’s life was her devotion to duty and service. As the Archbishop of Canterbury, Justin Welby, put it in his sermon at the funeral:

Is the Queen’s example of duty and service inspiring? Well, if we live in a godless universe, with nothing more than atoms and particles, then I’m afraid she was actually a fool. She’d have been far better off, like so many leaders throughout history, using her power for personal gain and pleasure. If Ian Dunt is correct, the best thing one can do is try to die with the most toys, wins, right?

Andy Bannister is director of Solas.