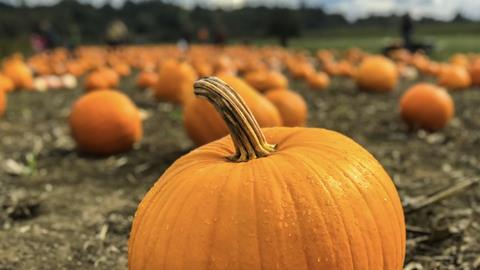 I became a Christian through a pumpkin party

Halloween may be a controversial topic for some Christians, but it was the beginning of a journey to faith for apologist Pedro R Garcia

I grew up in Spain, although I now live in Nashville, Tennessee, in the United States. Spain is a very secular country in the way people live their lives in general. Although, of course, there are Catholic churches everywhere. It’s very nominal though. My family had some experiences with churches - not very good experiences, overall. My uncle and cousin are Jehovah witnesses. My brother had a passion for Ufology or anything related to life on other planets. I was part of a family that was interested in the big questions.

I had a few conversations with some Catholic priests in my Catholic school that were interesting. When I started pushing certain questions I had about the existence of God and other issues, I don’t want to say the questions were avoided, but they were not bringing attention to those questions as much as I would have liked them to. I was asking those questions when I was about 10. Of course, this doesn’t say anything about the Catholic Church, just my experience with it. I think I was about 13 when I decided to leave the faith. So I spent many years being an agnostic/ atheist.

Even though I studied music, my passion was always related to the big questions, I would have loved to study philosophy. But in the music realm, I found a way to escape, a way to communicate things about myself that I couldn’t put into words. I started to study music, specifically, the saxophone, when I was 13.

I’ve always had this drive within me to go beyond what is expected of me. So I started doing research on how to make different sounds with a saxophone. And I started developing a very personal way to play the saxophone, which involved me making different sounds at the same time as playing. Long story short, I ended up in the final of Spain’s Got Talent and that allowed me to travel all around the world. They invited me to be a guest professor at MTSU, a University here in Tennessee. And that’s the way I got to the States.

My English wasn’t good at all. So the first thing I did when I came here was to connect with a company that was teaching Spanish, thinking perhaps we could do a language exchange. The owner of this company introduced me to her sister, Rebecca, who invited me to a pumpkin carving party.

At this pumpkin party, Rebecca was just helping me continually. I wasn’t even asking for that help. But the help was coming from such an innocent and super open minded place. That was when I started to see something in her and some of her friends - they’re so nice, they really care about me having a good experience.

Even though I care about the intellectual side of Christianity, that is not the main way I would say people get to know the Lord. We worship the Lord through the mind, of course. But when you see the things that he did on the cross for us, and when you see that reflection of people who believe in him in the way they conduct and behave in the world, that is a great testimony. That was the beginning of a journey.

When Rebecca and I started hanging out together, I asked her the big questions. What do you think about reality? Why do we exist? And that’s when she told me she was a Christian. My first reaction was: “Oh, no.” But then, the way they were treating me, it was undeniable. It reminds me of this beautiful verse of the fruit of the Spirit in Galatians, where Paul says: “There’s no law against these things.” When you see goodness, there’s just no way to deny it. And that was my position. This is just good, and I cannot deny it. And since I liked the big questions, I just wanted to know, from where this behaviour originated.

And I just started asking questions, questions and questions. That’s when Rebecca introduced me to her father, Dr Stanley Morris, who was a Bible translator - an expert on Aramaic, Hebrew and Greek. And for the first time, I had an opportunity to actually ask the big questions to a person that had been studying scripture and translating the original language.

Out of my complete and utter ignorance I thought you couldn’t be a Christian and intelligent. After these conversations, after studying a bit of how Western civilization developed through philosophical and scientific thinking, I now think that believing in God is actually one of the most rational thoughts there is (whether it is true or not is another conversation).

My future father in law would say: “I understand all your questions. But you need to understand that this is just not a random thought we’re just putting together. These thoughts have been developing for years, centuries, even millennia. And there are many philosophers and people that didn’t believe in God that actually interacted with these ideas in such respectful ways.”

I was so excited. I really wanted to know about everything. And that’s how everything started forming in my worldview.

A matter of conscience

When you filter everything through the cross, at least for me, everything kind of loses its meaning because the meaning it’s on the cross. So when we celebrate Halloween, we’re truly not celebrating anything. It’s just a tradition in which you do certain things. You eat candy, you talk about this and that, but it’s actually the meaning of what your conscience is telling you in the moment. When I’m at a Halloween party, my conscience is not telling me anything that is going against the beauty of the Lord or anything that he has done in life, so I’m OK with it.

The path to apologetics

The journey for me was investigating questions and realising that there were answers. And realising that sometimes there are no answers for our questions, which I think is a biblical thing, too, that no one knows what God has done from beginning to end.

I found the Unbelievable? Podcast. And when I saw the way Justin Brierley was doing it, I thought: “I don’t know anything. But I kind of want to do the same thing.” Because this verse from the Sermon on the Mount - “Blessed are the peacekeepers” - resonated with me so much, I want to bring peace through a conversation. And even though I’m not an atheist anymore, I realised as a human being I have so many things that I share with my friends, atheists. Even though, in terms of the big questions, we differ, there’s so many things that unite us. So I just want to bring people together.

I was indirectly mentored by Justin by hearing what he does and the way he treats the guests. So I just started studying, learning and asking questions. And now I bring together Christians and non-Christians in live events to have these conversations.