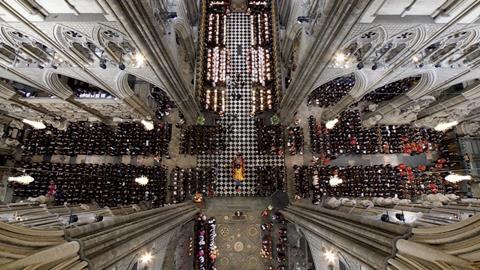 Following the Queen’s funeral, author Paul Kingsnorth reflects on what it means for a nation to profess that life has no meaning beyond what we ascribe to it.

The Queen’s funeral was broadcast on National television on Monday 19th September 2022. Paul Kingsnorth shares his thoughts from the day below. You can watch Paul’s interesting journey from atheism, via Zen Buddhism and Wicca, to Christianity, on this episode of The Big Conversation with the former Archbishop of Canterbury Rowan Williams.

I spent much of the day, along with several hundred million other people around the world, watching the funeral of the late Queen Elizabeth on TV. It was full of remarkable, beautifully choreographed and often moving moments, as you would expect of an event which has been prepared for since the 1960s. A lot of things don’t work very well in Britain anymore, but this kind of pageantry is something we can still do well. We will not see its like again, I don’t think.

I say ‘pageantry’, but this is a dismissive word. What happened today was a rolling, dense mat of symbolism, replete with historical meaning, anchored in a very particular nation and time period. What did it symbolise? Above all, I think, it symbolised something that our culture has long stopped believing in, and as such can’t really process effectively, or even perhaps quite comprehend. This was brought home to me by one particular moment in the ceremony.

You can see that moment in the photograph above. It’s a view from the height of the tower of Westminster Abbey, looking down onto the Queen’s coffin below. The Abbey is, of course, laid out in the shape of the cross, and the coffin was set down at the meeting point of the nave and the transept, where the two arms of the cross meet. At one point in the proceedings, the camera showed us this view, and then focused in on the scene, and the impression was that of some energy flowing down from above and into the coffin, then out across the marble floor and into the gathered crowd. 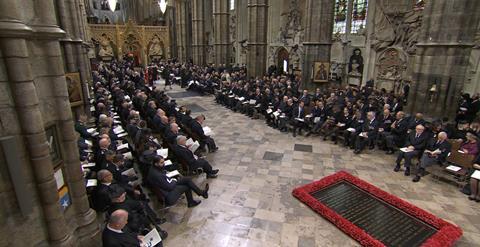 It struck me then that this was an accurate visual image of the world which this Queen’s death marks the final end of, and it struck me too that this must be one of the reasons why her passing has had such a huge impact - one way beyond the person she actually was. What we were seeing as the camera panned down was a manifestation, through technological trickery, of the ancient notion of sacral kingship.

This notion was the rock upon which the political structure of all mediaeval societies was built, and in theory at least it is still the architecture which supports the matter of Britain, whose bishops still sit in parliament with the power to amend laws, and whose monarch’s crown is adorned with a cross. Authority, in this model of society, flows downward, from God, and into the monarch, who then faces outward with that given power and serves - and rules - his or her people.

Forget for a moment whether you’re a Christian, or a monarchist, or indeed whether you just think this is so much humbug designed to disguise the raw exercise of power. I’m not trying to make a case here: I am trying to understand something that I think at least partly explains how we have got here.

The point of the model of sacral kingship is that all true power resides in and emerges from the great, mysterious, unknowable, creative power at the heart of the universe - the power which we call, for want of a better word, ‘God.’ Any power that the monarch may exercise in this temporal realm is not ultimately his or hers. At the end of the Queen’s funeral today, the orb and the sceptre, symbolising the Queen’s spiritual and temporal authority, were removed from the top of her coffin, along with the crown, and given over to the care of the Church. At that point, Elizabeth became symbolically what she had always been in reality, and we all are - small, ordinary people, naked before God.

This notion - that any power exercised by a human ruler ultimately derives from the spiritual plane - is neither British nor European. It is universal. Pharaonic Egypt recognised it, and so did Native America. The Anglo-Saxons believed it and so did the Japanese Emperors. Cultures large and small, imperial and tribal, on all continents over many millennia, have shared some version of this understanding of what the world is. Power, it tells us - politics, it insists - is no mere human confection, because the world is no mere human confection. There is something - someone - else beyond it, and if we are silent, in these cathedrals or in these forests, we can still hear it. Those who take power in this world will answer to it at the end. It is best that they know this now.

What is meaningful about this royal death is that the late Queen really believed this. So, I think, does her son, the new King. But the society around him very much does not. The understanding now is that authority flows upward from below, from ‘the people’ and into the Government, which supposedly governs on our behalf. In this model there is no sacred centre, and there is no higher authority to whom we answer. There is no heavenly grant of temporary office which will one day be returned, and a tally made. There is only raw power, rooted in materiality, which in itself has no meaning beyond what we ascribe to it. There is only efficiency. There is only management. There are only humans. And yet: watching the vast, snaking queue that all week has spreadeagled across London, as the crowds came to bow their heads before the coffin; watching the emotions on display today, and the massed crowds again across the country, bringing something to this event that perhaps they didn’t even understand themselves, I thought: No. We don’t really believe that there is nothing else. It is just what we think we have to say. Look: we believe in a bigger story. It is still there. It never left.

My point is not to argue for the return of mediaeval monarchy. Like I say, I’m not making an argument here. Still, like Jonathan Van Maren, who makes a similar case in a moving essay, I feel that this death is meaningful to so many because, whether we know it or not, it marks the final passing of this worldview. There is no sacral kingship now, and our leaders don’t even bother to pretend otherwise. Perhaps, as some do, you celebrate the passing of such an antiquated notion. What I am thinking this evening though is something I reflected on many months ago as I began my essay series here.

I am thinking that there is a throne at the heart of every culture, whether we know it or not, and that if we cast out its previous inhabitant - and the entire worldview that went along with it - we had better understand what we plan to replace it with. Someone, or something, is going to sit on that throne whether we know it or not. I can’t think of any societies in history which have believed - as ours does - that all that matters is matter. That nothing resides above the spires of the Abbey. That there is no throne. If there were any cultures like that - well, they didn’t last to tell us about it.

As I say, I am not making an argument. I am just watching. I am just looking down from that height, onto the nave and the transept and the coffin draped in the standard, and I am thinking: I have just heard the Last Post sounded for Christian England. We are in a new land now. We should pray that we find our way.

Paul Kingsnorth is an author and poet whose Buckmaster Trilogy has earned critical acclaim. Paul has a background in environmental activism and has had an interesting spiritual journey from atheism, Zen Buddhism and Wicca, to orthodox Christianity. You can hear more of his story on his Big Conversation with Rowan Williams here.

This article was originally published on Paul Kingsnorth’s Substack essay series. Read more of his essays here or on his website.