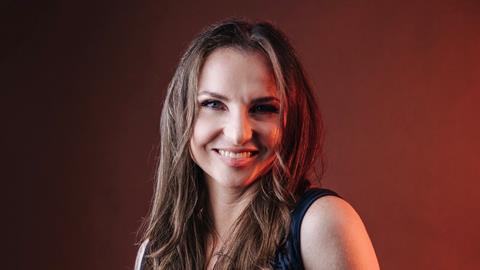 Anything But God: Adrienne Johnson's unlikely conversion to Christianity

With tales of Santa, flying reindeer and magical elves, the Christmas period is often brimming with make believe - something Adrienne Johnson also equated with the Christian story. However, through a long period of discovery, she came to see there was truth behind these ancient beliefs

As an atheist, Adrienne Johnson couldn’t remotely conceive of God as a possible reality, much less anyone she wanted in her life. Now, she can’t imagine life without him. Describing her transformation, she said: “I was a chain smoking, tattoo covered, sexually promiscuous, suicidally depressed atheist that was transformed by Jesus.” What was so profound that turned her from resolutely walking one way to changing course to a nearly opposite way of thinking and living?

Adrienne grew up in Santa Monica, California with two very loving secular parents. Any time that she was exposed to any kind of religion or spirituality, she rejected it, thinking it was all “make believe and fairy tales”, a fiction akin to belief in Santa Claus. For her, it didn’t make sense. It wasn’t logical, much less real.

Even though she was exposed to cultural Christianity through television shows, she had no understanding of what any of it meant. Her atheistic father introduced her to the writings of Richard Dawkins and believed his view that humans exist to be hosts for DNA. It confirmed for her that religion was no longer needed to make sense of the world. Atheism made sense to her as the most rational, cohesive worldview she knew. She found the natural explanations of the world even brought her comfort, explaining:

“We are a speck of dust hurtling through an infinite, vast universe with no meaning and no purpose. There’s no explanation. We don’t know why we’re here, how we’re here. We can never know. We will never know. We can just sort of throw our hands up and say: ‘It just is and it’s all random, and there’s no meaning to any of it.’ And somehow, when I was a young person, maybe in my early twenties, that was enough for me.”

Adrienne called herself “an adamant atheist”, describing her strong contempt and hostility towards religion:

“It was incredibly offensive, like when you’re in the dark and you are exposed to the light, and it’s so harsh and blinding. It’s very hard to be indifferent toward it. You either can accept it or you reject it, and you have to fight it, because it is so offensive to your worldview and who you are, and that was how I felt.”

Adrienne also enjoyed the intellectual superiority of her view, thinking she “knew best and knew more than other people, holding myself above others…I had it all figured out. I understand. I understand the way the world works, the way the universe works, and I don’t need meaning or purpose.”

This way of thinking worked for a while but over time it took a toll. She recalls the emptiness atheism brought into her life:

“It left a huge, huge void in my heart, in my life, and I was trying to fill that void with other things. Now if you had told me that at the time, I would’ve said: ‘Screw you. You don’t know what you’re talking about,’ and I wouldn’t have believed it. But now, of course, looking back on it I can see how that meaninglessness really affected me and left me thirsty, wanting more, and then very painfully trying to fill that void with things that could never and would never fill it.”

Searching for love and acceptance, Adrienne began smoking, drinking, taking drugs and becoming sexually active. She went “full force at it”, enjoyed it, but also “really damaged” herself as she was trying to fill the aching void. Throughout college, she continued to subdue the emptiness through perpetual relationships and one-night stands, only to find herself unsatisfied.

In graduate school she met her husband. They enjoyed intellectual discussions, writing poetry together. It was beautiful and romantic. Surely marriage would give her sustained happiness, but shortly after their wedding she “plunged into the depths of depression”. This began a cycle of seeking therapists and taking antidepressants on and off for many years, a “tortured place to live in”.

This ongoing pain caused Adrienne to “act out and blow up my life, to totally go crazy and just burn it all to the ground”. She became unfaithful, created chaos and ended her marriage.

It is only when Adrienne hit rock bottom that she finally decided to make a change. After all, something had to change or she would not survive. She began to attend support groups for people struggling with sex and love addition. Approaching 30 years old, she was divorced and ashamed, hurt and broken, but desperate enough to try anything.

The group encouraged her to seek a higher power. She thought it ridiculous that an atheist would be asked to pray to a god she didn’t believe in, but in her desperation she prayed, recalling:

“When I first started…I couldn’t even pray out loud. It was so embarrassing. Even when I was alone in my apartment or in my car, I would turn all hot and red, and I couldn’t bring myself to say anything out loud. And then finally I started, at the direction of my mentor I started saying: ‘This is stupid, and there’s no one here, and I’m only talking to myself, and I’m doing this just because I was told to.’”

For months Adrienne attended a support group, trying all kinds of spirituality. Open to anything and everything she tried New Age, Kundalini yoga, Buddhist chanting, Sufi healings, and attended synagogues and churches. She began to see a positive effect.

Although still in great pain and constantly tearful, for the first time in her life Adrienne wasn’t acting out in unhealthy ways. She was spending time with healthy people journaling, praying, meditating, writing, learning to be alone, becoming a spiritual seeker. But she wanted more than seeking. She defined that pivotal moment:

Adrienne decided she wanted to find the truth, what was real and substantive. Soon after she came to that realisation, a friend invited her to see a play of The Screwtape Letters by CS Lewis. She had never heard of it or the playwright, but because she loved theatre she agreed to go. This sobering play reveals the reality of spiritual struggle. This experience was her turning point, as it “completely changed her life”. For the first time, Adrienne understood the war for our souls, for her soul. She explains:

“The whole play is really about spiritual warfare, spiritual attack, about these dark forces that want to keep us hurting, doubting, alone, separated from God and even comfortable. They want to keep us comfortable and separated from God. And so I’m watching this play, and it’s like watching a mirror. It’s what I had been living for so many years, for so long. It felt so true. It just resonated so deeply within me.

And for the first time in my life, it occurred to me: ‘Maybe God actually wants me to be pure and happy, like truly connected to him and full of joy, and there’s this dark force that doesn’t want that for me.’ And it really blew my mind and opened up my eyes, especially after I had been on this year-long spiritual journey of trying all these different things, and then I see this play. It just completely shattered me.”

Although considering Christianity as an atheist was ridiculous and extremely uncomfortable, Adrienne became open to what it offered. Now curious and interested, she began meeting with and talking to Christians about Jesus. Although it made her “incredibly uncomfortable” there was also “something about it that felt right. It felt like truth”.

Adrienne began to read the Bible and reading books, meeting weekly with a pastor to talk about the Bible and her questions. For her, “it felt like God was wooing me. He was pulling me, lovingly, gently closer and closer to Himself”. One day as she was driving and listening to the Bible, she had a surprising experience. She recalled:

“The sun is shining and it’s that same feeling of just being washed with water, this bell ringing inside of me. There’s something about this truth. It’s just resonating. It just feels so right and so true. And in fact, once I got all the way through it, I was so thirsty. At the time I thought, ‘I need to find more Bible that I can listen to in the car!’ I’m frantically scrolling on my phone while also driving. I listened to the Gospel of John and then I just wanted more. I wanted to consume more of the Bible.”

Despite this sudden thirst for more, her “wrestling match” journey to faith wasn’t an easy one. Struggling towards belief, she read Mere Christianity by former atheist CS Lewis, listened to Tim Keller’s sermons and began to understand the intellectual grounding of a theistic worldview. Adrienne kept exploring Christianity.

One morning, as she was getting ready for work, it occurred to her that she believed, that she called herself a Christian. Adrienne finally found deep truth, meaning and purpose in life, and the acceptance in God through Jesus Christ that had long eluded her. Reflecting on her new life, she summarised:

Jana Harmon hosts the Side B Stories podcast where former atheists and sceptics talk about their turn from disbelief to belief in God and Christianity. She is a teaching fellow for the CS Lewis Institute of Atlanta and former adjunct professor in cultural apologetics at Biola University where she received an MA in Christian apologetics. Jana also holds a PhD in religion and theology from the University of Birmingham in England. Her research focused on religious conversion of atheists to Christianity. Her forthcoming book is entitled, Unlikely Stories of Atheists Finding God: Conversions to Christianity in the Contemporary West.