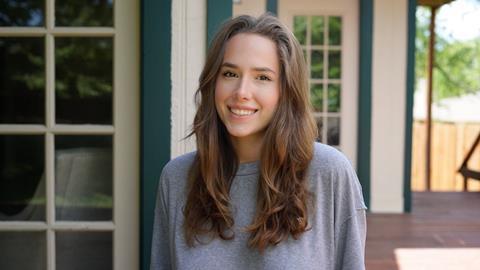 Claire Dooley grew up in a large religious family in Mississippi. Here, she shares some of her reasons for leaving the faith and why, after years of atheism and in her moment of deepest despair, she started exploring Christianity

Many people reject God because they had a bad experience with religion or religious people. It is a common tale. What once seemed hopeful and good turns bad and even repulsive, easy to reject. Religion becomes the counterfeit, worthless and empty, discarded along with other childhood stories and superstitions. Not worth taking another look, until perhaps it is.

Claire Dooley was raised in Mississippi as one of six children in a religious home. From a young age, her mother took them door-to-door telling others about God, a common practice among Jehovah’s Witnesses. Obedient to strict religious rules, she constantly felt like an outsider, unwelcomed among her peers. As much as she tried to be the perfect Christian, she felt that she never lived up to their high standards of performance. She would never be pleasing to God, slipping into anxiety, depression and self-harm.

This painful experience caused her to think, “If there is a God, why would he ever let me or a person suffer like this? He wouldn’t do that. And if he would, I still wouldn’t have anything to do with him.” By the time she was 16, she wanted nothing to do with religion, a “lost cause”, thinking she could never be or do enough for God. Claire thought to herself,

At university, Claire left God behind and found the freedom she had long craved. It wasn’t long before she moved from agnosticism to atheism. Dismissing God altogether gave her the permission to “do whatever I want to do, completely let go of any kind of moral direction”.

The end of her first year, she left university to hike the Pacific Crest Trail in California with a friend. In her mind, she “was trying to run away from everything and do something that was in my control”. On her way out of campus, she randomly picked up a free book called Mere Christianity to read along the trail. By then she was a self-proclaimed “full-blown atheist”. She thought the book was making fun of Christianity, sticking it in her backpack for reading along the trail. Little did she know it was written by a former atheist, CS Lewis, who was making compelling arguments for God.

Three days into her hike, Claire began reading the book. At first she was confused at the direction Lewis was going. If he was contending for the Christian faith, it wasn’t the Christianity that she once knew. In the meantime, countless things went wrong for them as novice hikers. A ‘trail angel’ named Norm found them as they were hiking the wrong direction, guiding them back towards their intended course. He not only prayed for them, but he took them to a fire station, charged their phones, resupplied their food and water, returned them to their trail, gave them a map and sent them on their way. More than that, Norm hiked ahead of them to every stop telling others to look out for them and followed up to make sure they were alright.

When Claire reached the top of the mountain with blistered feet and aching back, she sat down, silent, looking around for miles in every direction. She pulled out her book and started reading again. That was the moment she recalled thinking, “I can feel God. I don’t know what it is. I don’t know who he is, but something’s going on here, because I should be dead right now.” Unwilling to grant a personal God at that moment, she thought, “Maybe it’s the Universe looking out for me, and maybe CS Lewis is just talking about the Universe, but he’s not talking about God himself.”

Once home, Claire decided not to return to university but rather pursue a film program where she apprenticed with a filmmaker who had his own version of Christianity. He didn’t attend church, but read the Bible. Claire’s time with him “slowly opened her mind back up to the fact there may be a God who may exist and love us”.

Next, she moved to Texas to work on a documentary and stayed with the family of a friend. Former atheists themselves, they began to go to church because their autistic adult son wanted to go and they became strong Christians. Although they invited her to church every Sunday, she would always say no. Polly spoke easily and naturally about Jesus and “his unending love” in her conversation, in a way that Claire had never heard before. She also treated everyone with “this intense love and generosity, always giving to those in need, making meals for those who are sick, supporting those around her in love”.

In the same way, Polly and her husband surrounded Claire with love and support, something she had never really experienced. She recalled the effect that their love had on her life and on her wavering perception of God and Christians:

“I had never been loved like that. And to experience something like that from people who call themselves followers of Christ, I thought, ‘Maybe not all Christians are bad people, but I still just don’t think this is true. Maybe she just sees another side of God, but she’s not talking about the full picture,’ because that is what Jehovah Witnesses…kind of that indoctrination I had in the back of my mind. And so I thought, ‘She just doesn’t have it quite right.’ There’s still this part of God that is legalistic and hates us. And so I think, because of that, and subconsciously, I still was just completely denying that he was there because it was easier to do that.”

After a year Claire moved to Miami to work on another documentary. She was isolated, working hard, completely ignoring the idea that God may exist. Next came “one of the darkest moments of her life”. She was drugged at a bar and sexually assaulted. This nightmarish experience led her into deep despair, but also to her first prayer in a long time. Recalling this moment, she decided:

“I don’t want to be here anymore. This is horrible. If this is what the world is, I want nothing to do with this. It was the most intense pain I had ever felt in my life. I remember feeling like I couldn’t breathe and crying on the bathroom floor for days. And I thought, ‘I don’t know how I’m going to get through this. I really don’t.’ It was such a dark moment. And I remember just sitting there, and I prayed for the first time, ‘Look, if you’re there, I can’t do this alone. I cannot keep doing this alone. I’m going to kill myself if you don’t rescue me right now. If you’re there, come and let me know who you are because I can’t do this’ and I have no way to describe it other than I felt all of heaven surrounding me. Legitimately. I felt his presence so strong in the room, and all of those years of depression and suicidal thoughts and anxiety came crashing down on me at the same time.

I can never describe exactly what it felt like, but I remember thinking, ‘There are so many things in my life I’ve ignored. There are so many actions that I’ve taken that have caused me such great pain, and all of them are rooted in what I always thought was sin. And I’m going to acknowledge those things right now, and I’m going to feel it.’ And I remember flooding in my mind memories from my childhood, memories from my parents’ relationship, from other experiences I’d had, in particular with men abusing me sexually. And I mourned every single horrible thing that had ever happened to me.

And God said to me, ‘I’m here and I exist, and I love you.’ I didn’t hear his voice, but I felt that very clearly. And so I started this journey where I, once again, wasn’t really sure if it was the Christian God, but I knew there was a God, because I felt its presence in that moment so clearly. And it pulled me out of these depths at this moment where I thought, ‘I can’t do this unless I have you.’ And so I started praying for the next few months, but I wouldn’t say a name. I’d always say, ‘God, show me who you are. Reveal yourself to me. Show me the truth. I want to know who you are. I want to worship you. I want to love you, but I don’t know who you are.’”

Claire began reading books on Buddhism, Hinduism and anywhere she could think of to search, but she could not find the God whom she had experienced in her darkness. She prayed again, “Point me to you.” She then picked up the Bible and began reading it, utterly surprised at what she found. She read of God’s love, of creation, of how we were designed to live. She read about the reality of suffering, not its denial, that God was with us in our most difficult of times.

Recalling John and Polly’s outpouring of love towards her, she thought, “I want some of that. They’ve got it figured out.” Claire fully turned to God, the one who had “built this intricate story line of dropping me bite-sized pieces of love”. She continued to read the Bible and saw (in Romans 8) that:

“God’s love is unending, and that we were bought and paid for whether we wanted to or not. And he gave that freely as a gift to us. And there is not a single thing in the world we could do that could separate us from that love. And the thought that I couldn’t do anything that would separate me from that love caused me to question, ‘Is that what you’re saying to me right now? That you love me so much that you knew everything I would do in my life and you didn’t care. You loved me and you wanted to transform me and you wanted to give me hope and save me.’ That was a narrative I’d never heard before, and that was the truth of the Bible. It transformed my entire view of God.”

Claire didn’t have to be perfect. She didn’t have to save herself after all. He had already done that. She just had to place her life in his hands. Once she realized that, she reconnected with John and Polly who baptized her as a follower of Jesus Christ. In that moment, Claire made it clear to everyone that “this was the life I wanted to choose for myself”. Following God gave her the freedom, beauty and joy in her life that had long eluded her. She also realized: “It’s not that it’s always easier. It’s never going to be easier following Christ, but it’s definitely better.”

Jana Harmon hosts the Side B Stories podcast where former atheists and sceptics talk about their turn from disbelief to belief in God and Christianity. She is a teaching fellow for the CS Lewis Institute of Atlanta and former adjunct professor in cultural apologetics at Biola University where she received an MA in Christian apologetics. Jana also holds a PhD in religion and theology from the University of Birmingham in England. Her research focused on religious conversion of atheists to Christianity. Her forthcoming book is entitled, Atheists Finding God: Unlikely Stories of Conversions to Christianity in the Contemporary West.