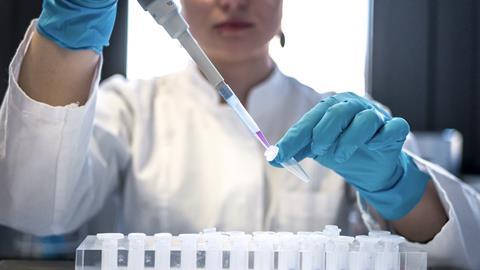 ‘Science is not enough’

Scientist Dr Sy Gate was a convinced atheist who thought the Church was the main enemy of humanity. Through his scientific study and a number of dreams, Sy begin to question his firmly held beliefs

In the scientific world, a paradigm shift usually takes a long time. Long-held beliefs are typically fostered and engrained over time and experience. These presumptions are often held without examination until someone begins to question, to search, to resolve an unexpected problem.

We all want to make sense of our world. When a piece of the puzzle doesn’t fit, we move towards resolution of the problem at hand. That is when the reigning theory is re-opened, examined and either questioned or confirmed. Change becomes a possibility, but not always in the direction you might expect.

For the first several decades of his life, biochemist Dr Sy Garte was a convinced atheist. During this time, he worked as a university professor and the National Institute of Health as an administrator. In his view, science was the best avenue to understand and explain the world. Supernatural belief and God had no place in his sobered, rational understanding of reality. Yet, today he strongly contends for the reality of God, the truth of Christianity and the mutually reinforcing beliefs in God and the pursuit of science. He became a passionate follower of Christ, devoting his life to Christianity and contending for its positive relationship to science. How did such a significant paradigm shift in his life occur?

A legacy of atheism

Sy comes from three generations of militant, communistic atheists who long resisted the possibility, much less the probability of God. In their Marxist view, religion was evil. His father, a chemist, was a strong materialist who dismissed any form of spirituality as “complete nonsense”. His mother, an “even stronger atheist and communist” rejected religion out of hand, allowing no related discussion or celebration.

Sy learned that religion was, as Marx contended, “opium for the masses”. But when he began listening to Martin Luther King, a brilliant leader of the Civil Rights Movement and a Christian, the whole idea that religion was for the stupid and superstitious did not hold together. It was then that he dropped communism and his militant atheism began to wane towards apatheism.

Sy got to the point where he “just didn’t care. It wasn’t something of interest”. But, as a scientist, he still wasn’t willing to let his atheism go. In his view: “Everything that we don’t understand can be explained by science. There’s no need for a god. And science disproves the supernatural.”

While at university, a Christian girl took him to see a film about the life of Christ. It unexpectedly introduced him to Jesus’ miraculous resurrection, a scene he found surprisingly beautiful and moving. Within five minutes, he convinced himself that the “amazing feeling” he experienced while watching was mere illusion brought on by the emotional effect of the music. As an atheist, he reminded himself that God didn’t exist and neither did his sensed brief other-worldly experience. His attention quickly turned back to his love for and pursuit of science.

Although this quest was personally fulfilling, Sy also felt a sense of something missing in his life. Over time, he also began to question the limits of science and its ability to provide substantive explanations of reality, recalling:

“I began learning things in science that were true and also questioned this whole idea of materialism and determinism, and that began really shaking my conviction that there is no god and cannot be a god. I began realising that there’s an awful lot in modern physics that doesn’t fit with determinism or materialism. Almost all of quantum mechanics, which is undeniably true, is not something that makes any sense in terms of our normal, logical, human way of thinking. It just doesn’t. And nobody says that it does. But what we know is that it’s true.

And, what I was learning about biochemistry, about life raised questions. The first time I really went into great depth on some of the biochemical mechanisms for how life works, especially the system that produces proteins from the genetic code, from DNA, RNA and the genetic code, I realised that system is just incredibly amazingly ornate and unbelievable.

I was a full atheist, but I got chills up and down my spine when I learned this material. I looked around at my classmates, and they were just writing everything down, like I was, but somewhere were in my mind, I was saying, ‘How did this happen? There’s no way this could have happened by spontaneous, random chance.’ I never thought, ‘This is design. This is God.’ And I still don’t know what it is, but it did shake the foundations of my conviction that God isn’t possible. And I began thinking, ‘Well, I don’t know. Maybe God is not impossible, which means that he is possible,’ and at that point, thanks to these scientific issues, and there were many others that came along. There are lots of questions in science that you just can’t ask because they have no answers.”

Those questions led Sy to a long agnostic phase where he admitted he did not know whether or not God existed. He became more open to the possibility of God and, in his words, “susceptible to the effects of the Holy Spirit” when he began to have sobering dreams and other unexpected experiences. The first “terrifying dream” revealed him barely hanging on the edge of a cliff and a voice telling him to “just let go”, the very thing he was afraid to do. After losing his grip, he let go and found himself perfectly fine lying on the ground with his hands clutching a boulder. The man who spoke was standing nearby. After awakening, he had no idea what it was about, but he sensed that something was holding him back.

Later, he met a woman who invited him to church. Admittedly terrified to go, he thought he would be “taunted at best and stoned at worst” but was “completely overwhelmed” by the sermon on love and the expressions of peace spoken towards him. This experience made him wonder what he had been taught about Christians and Christianity, “whether the Church was the main enemy of humanity” after all. He then had another significant dream:

“I’m by myself outside of a walled garden, and I know there’s a garden inside. I’m not sure how I know that, but it’s surrounded by this very steep wall which you can’t see over, and I’m circling around it, trying to find the way to climb up, and I can’t climb up, because every time I try, I fall down again. There’s no good handholds or footholds, so I’m getting very frustrated.

I’m walking around, and all of a sudden, there’s a man standing there, and he says, ‘What’s the matter with you? What are you trying to do?’ And I said, ‘I’m trying to get into the garden! There’s a garden there, and I can’t get over the wall.’ And he said to me, ‘Open the door. It’s right there’” So I did. There was a door, I opened it, and I walked in. And by then I knew that that meant something. I knew who the man was, and I knew what the garden was, and at that point, I decided, more or less. I don’t know exactly when, but at that point, I decided it was time to open the Bible.”

Too good to be true

Since Sy had seen the film about the life of Jesus, he started reading the Bible in the Gospel of Matthew. As he began to read Jesus’ teaching, especially the Sermon on the Mount, it was a “real eye-opener”. He then felt compelled to read more and discovered the historical treatment of Jesus Christ as resurrected. It made him face the key question, ‘Is it true that Jesus Christ rose from the dead? because if that’s true, you have to be a Christian. That’s the essence of Christianity.’ But, as someone who did not believe in the supernatural, he couldn’t yet believe:

The last threshold to belief was breached through a spiritual experience he had while driving home. Listening to the radio, he came across a Christian pastor giving a sermon. Not paying attention, Sy turned off the radio and began thinking about the idea of giving a sermon and what he might say. He recalled his final turn to Christ:

“I started thinking, ‘Well, I’d probably talk about the origin of life or something scientific.’ And then it happened. I had some feeling which I can’t explain, and I pulled the car over, which was a good thing because I began seeing myself speaking to a crowd somewhere in the countryside, outside, and I was speaking a sermon. And the sermon’s words came to me without any thought. They came from outside. I’m sure of it. And what I said was to these people, all of whom were Christians, I said, ‘You people should be praised and be happy and be blessed because Jesus Christ loves you, and I know that he loves you because Jesus Christ loves even me.’

And the word ‘sinner’ was important because I knew that I was a sinner, and when I say I’m a sinner, I really mean it. I had been a terrible sinner, not only for not believing in God and rejecting Jesus, but for many other things. And I said, ‘He loves even me, and if he loves me, how can he not love each of you?’ And I said a few more things about that, and then I stopped, and then it was over.

And I was sitting in my car, and I was crying uncontrollably, and I said out loud, sitting in the car, ‘I believe.’ And that was it. And at that moment, this huge weight just fell away, and then I understood my first dream. I had let go, and that weight was gone. And what replaced it was joy, and that has not left me one minute since then.

Sy found God, but he “has not given up one shred of his scientific worldview”, nor is there any reason to lose it. In his view, there’s no conflict between Christianity and science. He is still doing science and research and “will probably never stop”. Through finding God, he can now make sense of the world and of his life. All of the pieces of the puzzle fit together. This paradigm shift provided a better explanation of reality and of life itself.

Jana Harmon hosts the Side B Stories podcast where former atheists and sceptics talk about their turn from disbelief to belief in God and Christianity. She is a teaching fellow for the CS Lewis Institute of Atlanta and former adjunct professor in cultural apologetics at Biola University where she received an MA in Christian apologetics. Jana also holds a PhD in religion and theology from the University of Birmingham in England. Her research focused on religious conversion of atheists to Christianity.