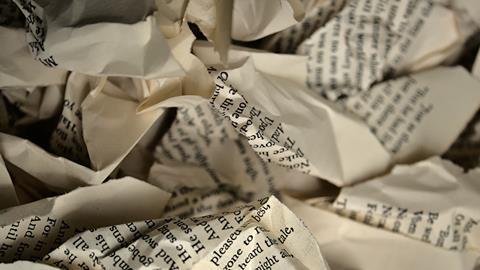 Should we blacklist books by fallen leaders?

Amy Orr-Ewing, Rachael Denhollander and Mike Cosper share their reflections on whether we should continue to reference material written by fallen leaders.

Unbelievable? recently broadcast a webinar panel discussion about sexual abuse and leadership scandals. The intention of the show was to serve the Church in learning from these crises and to support victims of abuse. The panellists included Amy Orr-Ewing, Rachael Denhollander and Mike Cosper. Amy is an author, speaker and theologian who served as Senior Vice President of RZIM until revelations about its founder Ravi Zacharias led to its closure in 2021. Rachael is an attorney and advocate for abuse survivors. The author of ‘What is a Girl Worth?’, she was the first woman to publically accuse US gymnastics doctor Larry Nassar of sexual assault. Mike is the presenter and producer of ‘The Rise and Fall of Mars Hill’ podcast and director of podcasts for Christianity Today.

Justin Brierley: As well as the direct victims of abuse, there is also the fallout for all the church members, all the people who followed a ministry and suddenly everything that leader, who was perhaps held in such high esteem, suddenly is all put into question. What’s your approach to the materials that still exist from people who have been subject to a scandal or are no longer seen as fit for ministry?

Amy Orr-Ewing: With specific regard to Zacharias, where you have a situation where a law firm conducted an independent investigation and there’s a document that you can see that is based on hours and hours of research and been published and then the subsequent investigation into the organisation, I think that the safe and wise thing to do is not to use those materials. I mean, for a number of reasons; for the sake of the direct victims of Zacharias, just to honour the image of God in every single woman abused, it seems like the right thing to do to lay those aside.

Secondly, in terms of the actual content I would now have massive questions about the legitimacy given the huge disconnect between what was being said and what was lived out. So, my own decision on that and anyone that listens to what I would say or actually most of the people who were involved in the organisation would say we wouldn’t recommend any of those materials.

Justin Brierley: Mike, do you have any thoughts on this, given that your podcast, The Rise and Fall of Mars Hill, was about someone who is actually still in ministry and is still leading a new church, albeit possibly not with quite the same platform that he once had. What’s your advice, given that Mark Driscoll is still pastoring people and having an influence of some sort at least?

Mike Cosper: There’s a spectrum to this where there’s some complexity. But, in the case of somebody like Ravi Zacharias, in the case of somebody like Mark Driscoll where you have this pattern of unrepentance and victims who are alive and suffering and unreconciled and all of this…There’s very little excuse that I can see, not only for those who would want to take the resources and use them in their church, but even more so for the publishers and others who are continuing to profit off of the work of these people who’ve done tremendous amounts of damage to others.

I think where the question becomes interesting is when you look at church history and there are so many examples of leaders with racist ideology or antisemitism. Or so many of the hymn writers, the writer of ‘Come Thou Fount of Every Blessing’, died having essentially abandoned his family and drank himself to death in a London flophouse.  People make this argument: we embrace the church as sinners and celebrate the grace that is evident in different people’s lives. And I think there is a case to make for that in certain ways in church history.

The problem that comes up in the argument about these living people, or these people who impacted people in our immediate moment, these people who are still alive, these victims of Ravi, these thousands of people that were affected by the collapse of Mars Hill, it seems a bit of a thumb in the eye. It’s a sense of wisdom in time and what does it communicate to those who were wounded by this person that you would make this book the centre of your book study, that you would name your sermon series after this, that you would hold a Bible study around this person’s materials? And even more so - I mean, when you really think about the money and the profiteering off of people who’ve done these kinds of abuses and just moved on to the next ministry - that’s just kind of repulsive to me.

Rachael Denhollander: I think the other thing we have to think about is the purpose of rebuking a leader is to protect a flock from the damage that they are doing and to sound a warning for all and especially when you have someone that you can look at who is still living and still trying to return to ministry. When you are handing out their materials or utilising their materials you are helping that abusive person who is doing harm to God’s children return to a position of leadership and authority. That’s antithetical to what we are supposed to do to leaders who are disqualified.

I think it does get more difficult, like Mike said, when we’re starting to look at church history. But at a bare minimum, even in that context, we need to be teaching with the fully orbed spectrum of what this person taught and stood for so that we can be aware of where their teaching may be very imbalanced or warped or unhealthy. I think what Amy said about just looking at those materials with the level of suspect is really important because for a lot of these leaders - and I think Mark Driscoll’s again just a good archetype of this - there are a lot of things he says that on the face of it I would say, okay, I would articulate that theology too. I would articulate some level of that type of conviction too. But when I start to understand his framework and his perspective and the fruit of what he’s doing and what he means by the words he says I start to realise that actually I’m not like that. The way he is framing and understanding these principles that he’s teaching, it actually means something very unhealthy. And if I were to put Mark in front of somebody or a fallen leader in front of somebody and say: “I think this is a really great articulation of this concept”, I’m exposing that person to a leader whose framework and mind-set and worldview and theology is incredibly warped and is going to colour everything else that they teach.

At a bare minimum we ought to be asking: are we re-platforming and putting these people back in positions of power who can continue abusing? Are we putting a disqualified leader up as someone who’s qualified? And I think that is what we’re doing when we’re holding up materials by somebody who is still living and is still trying to be in ministry. And when it comes to the church history, a portion of it, we need to articulate the full orb of what this person believed and what their life and their fruits show so that we can be on guard so that where those imbalances or weaponizations or twistings might be and be sure that we really are sifting the wheat from the chaff in their teaching.

Amy Orr-Ewing is an author, speaker and theologian who served as Senior Vice President of RZIM until revelations about its founder Ravi Zacharias led to its closure in 2021.

Rachael Denhollander is an attorney and advocate for abuse survivors. The author of ‘What is a Girl Worth?’, she was the first woman to publically accuse US gymnastics doctor Larry Nassar of sexual assault.

Mike Cosper is the presenter and producer of ‘The Rise and Fall of Mars Hill’ podcast and director of podcasts for Christianity Today.