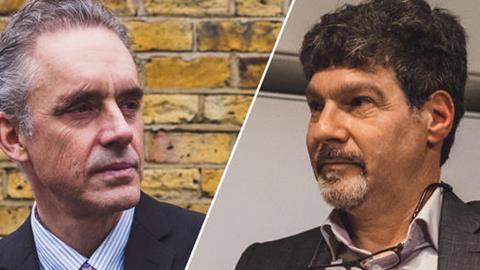 Why are the new atheists so triggered by Bret Weinstein and Jordan Peterson?

I am an atheist. But I’m not one of those atheists…

You know the type. The ones who spend every waking hour crafting internet memes like ‘I stopped believing in imaginary friends when I was 8 years old’ or ‘Science works, bitches’.

Admittedly, over the years I have entertained some of the more radical atheist views: Jesus never lived. Religion is a tool of subjugation. Religious belief stifled our scientific advancement, needlessly prolonging our journey to the Star-Trek-like utopia of tomorrow.

Such views are most forcefully disseminated by a vocal minority of atheists who - in addition to holding a disbelief in the supernatural - harbour a strong belief that religion is dangerous and that the world would be a better place without it.

For a while I, like many young men of my post-Christian generation, fell under their spell. However, in recent years I’ve come to reassess the relationship between religion, culture and science. Nowadays, I think the most outspoken atheists get religion badly wrong.

For the sake of argument and cultural clarity I think it’s helpful to separate atheists into two camps.

Anti-theists believe a certain narrative. They see very little good, if any, in religion and are on a mission to purge religious belief from planet Earth. They often recite a quote from American theoretical physicist Steven Weinberg as one of the central tenets of their beliefs: “With or without religion, good people can behave well and bad people can do evil; but for good people to do evil - that takes religion.”

Open-minded atheists do not believe this, however. So what do they believe?

As the rhetoric of the new atheists has waned in recent year, so a new conversation has sprung up. Evolutionary biologists Bret Weinstein and David Sloan Wilson, social psychologist Jonathan Haidt, anthropologist Joseph Henrich, and (perhaps most notably) clinical psychologist Jordan Peterson are among a number of thinkers working hard to illuminate the origins of religion. As they frequently point out, if religious beliefs are the product of evolution then they should be taken seriously, rather than dismissed.

While religion sometimes has the capacity to create between-group conflict, the evolutionary mechanism at work in most religions is to turn selfish, greedy, lying individuals into selfless team members willing to die for their brethren. At present, it’s an open question whether society would cohere at all without the helping hand of religion. I suspect many readers and most religious people believe it wouldn’t.

However, there is a vocal minority of ‘militant atheists’ who seem determined to toss aside this evolutionary story (ironic considering one of the most vocal, Richard Dawkins is an evolutionary biologist) in favour of their personal animosity against the supposed ‘mind-virus’ of religion. This is the attitude that Jordan Peterson refers to as “the thirteen-year-old-atheist view of religion”.

As someone who was once prone to such a juvenile approach and now sees so many deeper evolutionary truths in our religious traditions, it’s encouraging to hear Jordan Peterson point it out.

The value of religion

It’s worth noting that the vocal anti-theists are in a minority compared to the vast majority of atheists who simply lack any belief in the supernatural. Most of us see religion as a benefit to society.

As Bret Weinstein reiterated in his recent Big Conversation with prominent theologian Alister McGrath, religion is “metaphorically true.” It’s not true in the literal sense, but if you act as if it’s true you are going to live a better life. Jordan Peterson has said that he acts “as if God exists” and often says pragmatically that religion is “true enough.” Even as an atheist, I like this outlook.

We live in a very bifurcated world. One where many people are pitting science and religion against one another. It is my belief that part of the reason for the huge rise in popularity of Jordan Peterson is his consistent ability to articulate a way out of this conflict. As Peterson wrote on his blog shortly after the first of two on-stage debates featuring himself, Bret Weinstein and prominent anti-theist Sam Harris:

“We face two deep and fundamental threats to psychological and social stability: religious fundamentalism (on the right, essentially) and moral relativism/nihilism (on the left). To buttress ourselves in a somewhat permanent manner against those threats, we require the development of a value system grounded in something non-arbitrary—something real.”

And Peterson wants to give us something real. The psychologist is articulating a path that former Christians can use to gain a deeper understanding and respect for their religious heritage, while maintaining a materialist worldview.

In the first of those two conversations between Sam Harris and Bret Weinstein, Peterson put forward an exhaustive list of definitions for God. Until then, tribalists on both sides of the theist and anti-theist divide seemed determined to place Peterson in one camp or the other. As Peterson has risen to prominence there has been some contention over the status of his own religious beliefs and in that first exchange with one of the world’s most famous anti-theists, he came prepared.

When they met, Peterson read out his long-awaited list of naturalistic descriptions of God. Sam Harris, the ultimate materialist, cut Peterson off at definition no. 10 to interject with a description of God that he seems to have the biggest problem with: The Wish-Fulfilling God. The caricature of God as a Santa Clause figure with a bag of goodies.

But, is that version of God the one that evolved religions actually delivered us? Are we all perpetually craving the handouts that God can give us?

Some religious expression may embody such a view. However, Harris’ caricature conveniently sidelines the forgiving and aspirational God so clearly embodied by the Christian narrative. It ignores the religious narratives that so consistently turn selfish apes into selfless people. Quite the opposite of what Steven Weinberg asserts, religions have actually evolved to turn bad people into good people.

As Peterson describes ‘God’, he weaves a narrative of humanity’s evolutionary history. A narrative that embodies our development into beings willing to sacrifice for our team, our tribe, our nation and ultimately the greater good of humanity.

It’s this narrative that ardent anti-theists will find very difficult to rebut. In many ways, Jordan Peterson and Bret Weinstein are just popularizing ideas and scholarship that numerous authors and thinkers such as Michael McCullough (Beyond Revenge) Jonathan Haidt (The Righteous Mind) and Stephen T. Asma’s (Why We Need Religion) have already expounded.

That Vancouver talk between Sam Harris, Jordan Peterson and Bret Weinstein has over 2 million views on YouTube. Late in the conversation, Harris asks Peterson what percentage of religious people believe in the materialist version of God that Peterson is persistently attempting to flesh out.

It’s a good question, one I’ve considered myself. It’s unclear and Peterson says so, but with Peterson’s rise to prominence I feel it can’t be small.

Peterson responded to Harris: “When I go talk to people online, and use exactly this terminology, millions of people listen, so it’s not so obvious what percentage of people see it this way. It maybe that they have the intuitions, but they haven’t been articulated.”

This, I feel, is the power of Jordan Peterson and other thinkers like him.

While Sam Harris, Richard Dawkins and a whole host of militant anti-theists can only view religion as a destructive force in the world, at odds with their own scientific ethos, thinkers like Jordan Peterson and Bret Weinstein are quietly articulating a path around this impasse.

How many people will accept this new evolutionary way of describing religious wisdom? That’s yet to be seen. But, as someone who sees the immeasurable value in both Judeo-Christian ethics and the scientific worldview, Peterson and Weinstein are - dare I say it - a blessing.

Thinkers like Peterson and Weinstein are the bridge between these two worlds. They are shaping a way forward “grounded in something non-arbitrary”

As Peterson so perfectly puts it, grounded in…