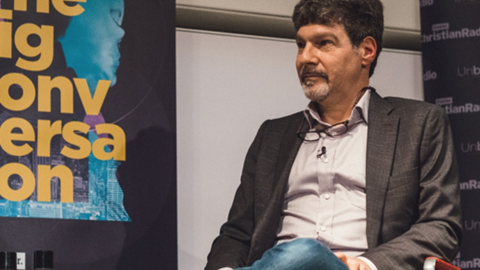 Bret Weinstein’s blind-spot. If you want to fix the world, you can’t escape religion

The world was introduced to Bret Weinstein by a religious war he didn’t see coming. Having been driven out of Evergreen College in Washington State by a woke inquisition Bret now wants to reduce the hostility between traditional religions and the atheist (church) by explaining the Darwinian roots of religion to both sides.

In an opinion he shares with his friend Jordan Peterson, Richard Dawkins didn’t take his insight of memes far enough to see all the ways that humanity has evolved not just via genetic mutation but also cultural mutation. Religion for Bret is just as much an adaptation via the culture code as wings on a chicken are from genetic code.

Bret recently shared a stage with Alister McGrath, a favorite author of mine. Their dialogue on ‘Religion: Useful Fiction or Ultimate Truth’ was the first episode in a new season of The Big Conversation from the Unbelievable? show, hosted by Justin Brierley.

The evolution of Christian orthodoxy

I was excited about this conversation because I knew Bret’s take and I had hoped that Alister might bring along the first book of his that I read entitled Heresy. That work has been my go-to book to explain a Darwinian model for the development of Christian orthodoxy.

It is often the case that parts of the church (like Jesus’ disciples in the Gospels) get the answers to important questions wrong before they get them right. Christian knowledge (which we call orthodoxy) grows as the church tries out a diversity of ideas (heterodoxy) only to discover that certain ideas begin to resemble Darwinian dead-ends.

As seen in the light of Richard Dawkins’ memes, the development of Christian theology is one long competition of world-view memes where orthodoxy lives on and heresies show themselves to be dead ends in the long run. Alister says it better than I do. “So what is heresy? Heresy is best seen as a form of Christian belief that, more by accident than design, ultimately ends up subverting, destabilizing, or even destroying the core of Christian faith.”

For all of Bret’s insight on biological and cultural selection he lacks a good understanding of how religious communities actually work. This is forgivable having shared the fact that as a boy he was interested in Hebrew school but left after discovering that it was not a place that welcomed the probing questions of bright little boys. This continues to be a sin in many churches, concealed by a desire for orthodox respectability, but which keeps them from engaging in the type of meaningful conversation Bret and Alister were having.

Bret quite reasonably sees humanity, through biological and cultural evolution, as painting itself into a deadly corner. As a society we stare down the double barrels of nuclear proliferation and environmental catastrophe, neither of which our political systems seem able to productively engage.

Bret imagines (like many others) that the way religion works is that holy books tell religious people what to do and they do it, sort of like our genetic coding is worked out in our lives. Most of us pastors know that, at least for the Bible, our holy book works far more mysteriously than that… and religious people are nowhere near that compliant.

It is quite fashionable today for non-religious people to propose a new religion that won’t be a “supernatural” one. They understand the organizing and motivating power that religions wield over the very long term and they see that humanity had better organize or it will die, toot sweet. The problem Bret and others see with the holy books and the established religious communities is that they don’t offer the imagined explicit prescriptions (which he identifies as “wisdom”) directing the imagined compliant religious people to fix up this world and turn it into the lowered-expectations sustainable planet he believes we should want.

A case in point - during the conversation, Bret suggests that some advice from the Bible on the ethics of enriching uranium would have been helpful. Alister responded that scripture gives us the ethical principles for responding to novel challenges, rather than a definitive prescription for every situation.

Otherwise, for most of the evening the theologian had been making politely appreciative comments and some minor “yeah buts”… until the end. There he quietly and calmly suggested, “it’s almost as if you are proposing a new religion to meet this new challenge. I think that’s very interesting, but I think you may find some people will disagree with that”. Bret seemed surprised.

Bret’s project bears a number of blind-spots that more seasoned religionists readily recognize. Bret simply assumes broadly Christian definitions of ‘the good’ but stumbles on the footnotes. Bret doesn’t fully appreciate, as Alister suggests, what religion calls ‘sin’ and that its wages are exactly the catastrophe Bret is warning against.

Human beings are conflicted mess-makers, especially in their attempts to fix the world. A bit more experience with the Hebrew Scriptures might show him that humanity repeatedly paints itself into violent and painful corners as symbolized in the barrenness of Abram’s wife.

I would have loved to insert CS Lewis’ ‘Life in an Atomic Age’ at that point in The Big Conversation, noting that the painful painted corner has always been with us. Whether the calamity comes at an individual level or a global scale, science has never once suggested that the universe can finally escape it. Whether it’s nuclear terrorism or a rise in sea levels, all will die given enough time. Darwin’s great mechanism will come to the end of its ability.

For a guy looking for a religious-yet-not-religious solution to what threatens us I’d suggest he learn to recognize more subtle forms of religion when he speaks them. The quest by angry students to purify Evergreen of the racism they imagined Bret was harboring brought threats of violence and suffering upon him and his family. World-saving itself is bloody proposition for humans as witnessed in how many 20th century attempts at class struggle or improving the race.

Christianity’s God-Man came into the violent culture war of his time and tells his friends and enemies “if anyone’s blood will be shed for your violence let it be mine”. This is the greatest anti-Darwinian meme to be perpetrated on a species that has bathed the planet in the blood of their human and animal competitors for all recorded history.

Bret is right that we need a religious solution and he is right that we don’t have time to write a new one. I recommend the one led by the man who loved his enemies enough to die for them turning at least some of those enemies into disciples who still go and do likewise.

Paul vanderKlay is a YouTube vlogger and pastor in Sacramento California https://www.youtube.com/paulvanderklay

Watch the full dialogue between Bret Weinstein and Alister McGrath at TheBigConversation.show