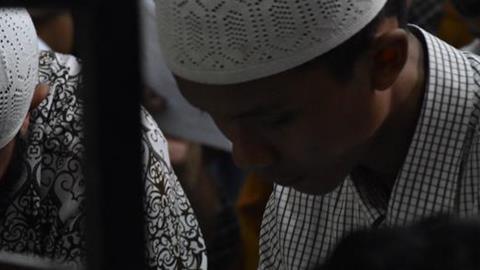 Was Jesus a Muslim or a Christian?

Something very odd is going on in our heads when we see a title like the one above.

It jars within us, it goes against the grain. We see two conflicting ideas being made to look the same. We might do a double take, after all “Jesus” and “Muslim” just don’t go together.

But that’s assuming you are reading this as a Christian. If you happen to be a Muslim, then like millions of Muslims you know Jesus as a messenger of God, and an early prophet of Islam. To you, Jesus was a great Muslim.

Both Islam and Christianity claim Jesus. In fact, on the face of it, there are many similarities between the two religions. Both believe in one God, both stem from Abraham and, interestingly, both are centred on a man and a book. For Christians it’s Jesus and the Bible, for Muslims it’s Mohammed and the Qur’an.

Was Jesus a Muslim?

Muslims claim that Islam, a state of submitting to God’s will, is the natural way of how things are meant to be. Jesus was a good Muslim prophet, along with Adam, Noah, Abraham, Moses, David, Zechariah, John the Baptist … going on to Mohammed. This line of continuity testifies to Islam as the natural order since the beginning of time.

Not only that, Muslims believe that the Qur’an, which dates from the seventh century AD is the correction of the earlier faiths of Judaism and Christianity. Christianity, they believe, became corrupted first by Paul, and then by many others, and Islam is the correction that was needed. A faith tarnished over centuries cannot compare with the final Revelation given to Mohammed.

According to the Qur’an, Jesus – or Isa in Arabic  – comes in the line of prophets:

But the specific arguments for Jesus being a Muslim do not hold. They end up being contrived.

Muslims believe Jesus himself was neither God nor the Son of God, and he didn’t die on a cross, it only appeared so:

They did not kill him (Jesus), nor did they crucify him, but another was made to resemble him. (Surah 4.157)

A big problem for Muslims here is that the crucifixion of Jesus is an accepted event, documented by non-religious writers as well as Christian writers in the first century. It is a well attested fact of the ancient world – and a headache for Muslim scholars.

Muslims must keep at least four of the five pillars of Islam. Some claim that Jesus kept the first four.

1. Shahadah (faith): Jesus recited an early (pre-Mohammed) version of the statement required of Muslims, eg Mark 12.29: ‘Hear, O Israel: the Lord our God, the Lord is one. But this is different to the Shahadah: “There is no God but Allah, and Mohamed is his messenger”.

2. Salat (prayer): Jesus performed prayers, also prostrating himself as Muslims do eg in the Garden of Gethsemane (Matthew 26.39). But there is no indication that Jesus did this five times a day, or facing Mecca.

3. Zakat (charity): Jesus did works that benefited the poor and needy.

Was Jesus a Christian?

Hang on! Surely Jesus was a Christian?

A Christian is a follower of Christ, Jesus himself is the Christ, the anointed one, the Messiah, so it wouldn’t make much sense to follow himself. Apart from anything else, the term “Christian” only appears well into the book of Acts (Acts 11 in Antioch). Before that, followers of Jesus were called “followers of the way”.

Jesus is the founder and the cornerstone of Christianity – “the author and perfecter of our faith”. He is the reason there are Christians, but it doesn’t make sense to say: “Jesus was a Christian.”

Was Jesus a Jew?

In fact, he was a very good Jew and also a very troublesome Jew.

As Christians we believe that Jews have a partial understanding of the revelation of God, but what we cannot doubt is that Jesus was a Jew, a first century Jewish Rabbi. The Jews do not believe that Jesus fulfilled prophecies of the coming Messiah, nor that he was God.

So why does any of this matter? Well, when it comes to Jesus and ‘religion’, it’s worth thinking about a few things.

Jesus’ most scathing criticism, his harshest words, were directed at the religious teachers of his day, and the hypocrisy with which they followed their religion (try reading Matthew 23). Interestingly, when it came to people who practised other religions, such as Pagans or Samaritans, he offered little criticism. It seems hypocrisy angered Jesus much more than ignorance or mis-direction. There is something for us to learn here.

The gospel, the good news we talk about is not a thing, not even a message, it’s a person. It’s Jesus. Of course, we add things to this …. the way we happen to do church, our traditions, our favourite songs, whatever. The ways we do religion can be helpful (or not), but, it can also take over. Ultimately Christianity is a relationship with a person.  Sometimes Christians need to discover this too.