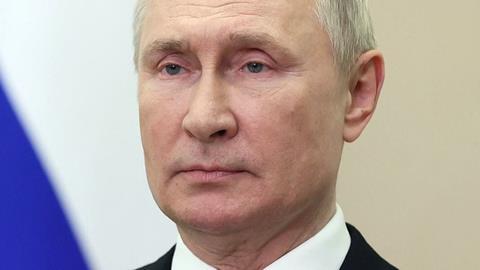 Putin’s Blasphemy: 3 reasons why the Russian President is no true Christian

Peter Harris argues that Putin’s warped religious beliefs are at odds with the Orthodox faith he claims to hold.

Much has been rightly said by commentators about Vladimir Putin’s religious motives for his bloody démarche against Ukraine. It is almost now a cliché to say that this conflict is not only about geo-political aims, but is motivated by religious convictions.

To us in the secular West, whose politicians as Alistair Campbell declared, do not ‘do God’, Putin’s crusade is hard to grasp. Recent Western wars have been justified on the grounds of eradicating religious extremism in places such as Iraq and Afghanistan, not the imposition of Western Christianity. Yet still so thoroughly evangelistic is the West, that its wars in Iraq and Afghanistan have led to the propagation of secular creeds such as gender egalitarianism, democracy and human rights. Washington and London are still offering, or imposing depending on your point of view, a kind of Good News.

Putin’s offensive, however, is full-blown religious nationalism whose motivating myth is Holy Rus’. Putin wants to revive Holy Rus’ which traditionally has consisted of the sacred lands of Russia, Belarus and Ukraine. Belarus, ruled by the sycophantic Aleksandr Lukashenko, is safely in the fold. But Ukraine is led by Volodymyr Zelensky, a West-leaning president, who is seeking EU membership.

Putin regards Ukraine as being corrupted by Western culture which has denuded itself of its Christian heritage. Ukraine is spinning out of Russia’s orbit and for the ageing Putin, the time has come to act. Ukraine is of particular importance to the notion of Holy Rus’ for it was in Kiev in AD 988 that the Russian people converted to Christianity. Kiev, not Moscow, is the birthplace of Russian Orthodoxy and Putin wants it back.

Who would have guessed it though? Putin, the former KGB officer and the face of Soviet atheism in East Berlin, seems hardly the sort of man to dream of religious empire. Yet, it transpires that though his father was an atheist, his mother was a believer who had baby Vladimir secretly baptised. Putin has retained a belief in God and continues to wear the crucifix that was his baptism gift. He sees himself as the defender of Russian Orthodoxy, a role that has been traditionally ascribed to Russia’s Tsars.

However, Putin’s secular strategic ambitions continue to play a major role in his machinations. Ukraine would be a useful buffer-state that would protect Russia’s vulnerable southwest flank which has no natural barriers and plenty of flat land open to attack. Russian forces targeted ISIS in Syria, a nation that has a large Eastern Orthodox population, but Putin’s principal aim was to preserve his ally, President Assad, from US-backed regime change.

Another example of ‘religion poisons everything’?

Putin’s offensive in Ukraine seems to be a godsend for those atheists who have imbibed the Christopher Hitchens-style message that religion poisons everything and is the main cause of wars. However, what we are dealing with here is not an unadulterated Christian faith on the part of Putin, but his perversion of true Orthodoxy by merging it with nationalism, a combination encouraged no less by Kirill, the patriarch of the Russian Orthodox Church, who also dreams of revivifying Holy Rus’.

The problem with Putin’s nationalist Orthodoxy is that it is condemned by the Eastern Orthodox theology to which Russian Orthodoxy subscribes. Putin’s view that his actions in Ukraine are an expression of the divine will is blasphemous and the deaths and environmental destruction he is causing are sacrilege.

Now, let us be clear that I am not pursuing a no-true-Scotsman style argument by asserting that no true Orthodox believer would unleash cruise missiles on urban centres in Mariupol. The point of the no-true-Scotsman fallacy is that there is nothing inherent in a Scotsman other than that he is truly a Scot and a man. Nothing else follows on from that. He may be a parakeet breeder for all we know. Therefore to say that no true Scot could do anything wrong is to idealise him without any evidential basis.

Putin is no true Christian

However, there are certain beliefs within Eastern Orthodoxy that if held to sincerely and if they mould behaviour, as they are intended to do, would prevent a believer from plunging a peaceful neighbouring nation into barbarism. Therefore, Putin’s religion is morally false, though highly dangerous, because it is a tyrant’s conviction. How is Putin therefore condemned by Orthodoxy? Here are three reasons.

1. Eastern Orthodoxy teaches that God is intimately present to all of his creation.

St Augustine put it well when he said that though God in relation to humans is higher than their highest selves, he is more inward than their inmost selves. This sense of God’s infinite closeness to his creation is something that perhaps Western Christianity has lost. The liberal tradition that regards humans as autonomous centres of reason perhaps does not sit well with a theology of divine proximity.

Eastern Orthodoxy, however, has retained the belief in a God who is close to all that he has made. The destruction wrought in Ukraine is done before the very face of God who sees and knows all things and whose creation is being maimed, mangled and killed. No wonder St Augustine and then St Thomas Aquinas formulated the just war theory to attempt to limit significantly war’s occurrence. By this theory and by the sacred nature of the cosmos, Putin’s militarism stands condemned.

We see this in God’s command to bring the Good News to the whole world at the end of Matthew’s Gospel (28:16-20). At first the fledgling Jewish Church did not get the point, but after the dramatic conversion of the Roman centurion Cornelius and his relatives and close friends through the Apostle Peter’s preaching (Acts 10) and the Jerusalem Council’s decision to mandate missions to the Gentiles (15:1-35), Christianity took its first steps in ceasing to be a Jewish sect and becoming a world faith. The Book of Revelation presents the great multi-ethnic image of worshippers of all nations around the throne of Christ (7:9).

Therefore, by implication, Christianity is not to be associated with any particular territory or identified as belonging exclusively to a particular culture or ethnicity. People are not born Christians, but become Christians through repentance and faith in Christ. The kingdom of God is therefore a kingdom of people, not of lands, and is not of this world (John 18:36). As part of the universal church, Orthodoxy in all its forms, including the Russian, is no different.

The names Eastern Orthodoxy and Russian Orthodoxy are historical names that identify where these forms of faith began and where they continue primarily to flourish. However, the great mission work undertaken by ancient Orthodox missionaries to the Goths, the Phoenicians, the Scythians and the Persians reveals the international identity of Eastern Orthodoxy right from its start. Russian Orthodox missionaries were particularly known for their evangelism to the Mongols, a traditional enemy, to the Chinese and the Aleut people of Alaska.

In his work The Mystagogia, the Orthodox saint Maximos describes the glorious diversity of the Orthodox Church. According to Maximos, men, women and children who are very different according to their race and nationality are born into the church, both the Orthodox Church and the universal church. Such a church, according to Maximos, is worthy of Christ as its head in whom there is now neither male nor female, neither Jew nor Greek and neither barbarian nor Scythian (Galatians 3:26-29). The notion that there is a special sacred space by the name of Holy Rus’ ignores the church’s internationalism and the holiness of the whole cosmos as God’s creation and gift.

3. All human beings are made in the image of God

It is a Jewish and Christian belief that all human beings are made in the image of God because of God’s love for them and his desire to be loved by them in return (Genesis 1:27). This doctrine, as the Dominican theologian Père Camelot has observed, is absolutely central to Orthodox theology.

For the ancient Orthodox fathers such as Athanasios, Christ is the image of God and humans who are made in the image of God are therefore made in Christ’s image. This they interpreted as meaning more than possessing certain faculties such as being rational. The Greek word for rational is logikos which is connected to the word Logos, which is translated as the Word and is the name John gives to Christ (John 1:1).

Being rational, humans participate in the Logos, the Word of God, which means not only can we communicate meaning, but also that we can communicate with God and therefore have a relationship with him. This is a relationship of love since God is love (1 John 4:8) who chooses to love humans because of his grace. As humans are everlastingly valued by God which is exemplified through his having made them in his image and having died for their salvation, the destruction of humans, both civilian and combatant, in Ukraine is sacrilege of the most profound kind.

Putin has set himself up in place of God

Let us end with a powerful image that encapsulates the heart of Eastern Orthodoxy’s existential understanding. According to St Philaret, the great Metropolitan of Moscow of the nineteenth century, all humans stand balanced on an adamantine bridge between the infinite incomprehensibility of God above and the abyss of nothingness out of which they, and indeed all creation, were made. The bridge is the Creative Word, or Christ.

This is an extraordinarily humbling image of human dependency on God. We exist because of his decision and our ability to relate to God is made possible only by the mediating power of Christ. What we know of God is most fully seen in Christ as revealed by the Scriptures and yet God also remains inscrutable to human understanding. For Putin to declare he knows the will of God for Ukraine, to appoint himself as the Tsar-Protector of Russian Orthodoxy and to take the lives of thousands in the process is presumptuous and indeed evil in the extreme. Let us pray for him whilst there is still time.

Peter Harris is the author of the forthcoming book Covid-19 and Pain: Can We Still Believe in God?