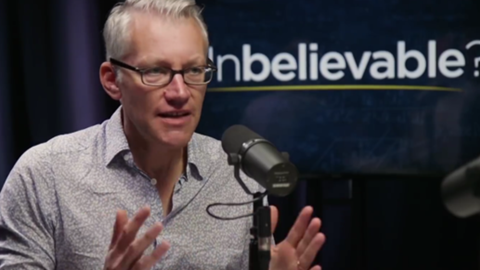 Bringing diverse and brilliant minds together for unique and fascinating conversations is the best part of my job as the host of the radio show and podcast Unbelievable?

The latest show is no exception. Tom Holland (no, not the Spiderman kid) is well known for his accessible works on antiquity including books such as Dynasty and Rubicon on the rise and fall of the Roman Empire. He has also produced important (and by their nature controversial) TV documentaries and books on the spread of Islam.

What has also become apparent is that Holland is increasingly open about the fact his research has led to a significant change of heart towards Christianity as a cultural force.

The historian became both fascinated and appalled by the might and cruelty of the Roman Empire and aspects of the Islamic world that arose later.

In his recent Unbelievable? dialogue with renowned Bible scholar NT Wright he gave perhaps his clearest statement yet on the way early Christianity was the source of the values, institutions and way of life the modern Western world takes for granted.

He describes Paul’s own theological vision in the New Testament as a “depth charge” under the foundations of the classical world which we are still feeling the ripples of through Latin Christendom, The Reformation and The Enlightenment.

Watch this 4 minute excerpt to see for yourself:

You can also enjoy the full dialogue here:

Of course, believing that Christianity has been a tremendous force for good does not mean you believe that it is true. On this front Holland says that, despite being attracted to aspects of Christianity, he has yet to make the metaphysical step of faith.

When he joined me for an earlier show in 2016 he described his doubts as mainly circulating around humanity’s relative insignificance in the face of billions of years of evolutionary history and a vast universe. Neverthless he concluded by saying this: “When I have experience of the sublime, when I have a sense of something beyond me, that is Christian and that there is nothing that I find more moving really than the narrative of the Passion and the Resurrection and perhaps that is still a faint guttering flame of faith that is there to be tended and may become a more fuller flame in due course.”

Wherever the journey takes him, I enjoyed being able to host such a meeting of minds. And I hope you’ll also enjoy listening to it.