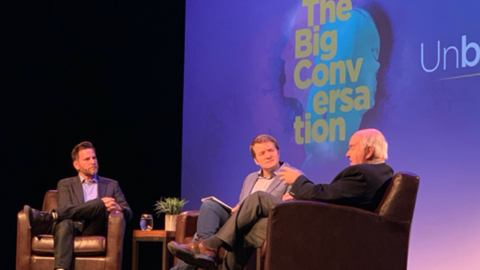 Rubin and Lennox. A pairing that shouldn’t have worked… but did

I confess, I scratched my head when I first heard that Dave Rubin and John Lennox were going to be having a conversation about the death of God on Unbelievable? After the sparky, high-octane match-ups we’ve seen so far on The Big Conversation, this felt like it would be the one that didn’t belong. What exactly would they talk about, I wondered? It wasn’t quite as odd-seeming as if Eric Metaxas and Graham Oppy had been invited to sit down for a discussion of Aquinas’s Five Ways, but it seemed in the ballpark.

In one sense, I was right. It still doesn’t feel like it belongs. But as it turned out, that’s not necessarily a bad thing.

Getting to know you

To Dave Rubin’s credit, he felt the same way, even asking at one point “What exactly am I doing here?” and at another point joking, “I really want to know what the original pitch to my agent was for this.”

Rubin is a sunny Cali talk-show host, not an intellectual. But in fairness, he’s never pretended to be. Personally, I’ve always found it easier to like people who don’t pretend to be something they’re not than talentless would-be intellectuals who missed the memo. (Insert your own YouTube celebrity/unemployed blogger who shall remain nameless here.) In fact, Rubin’s candor and humor paired well with the easy Irish charm of John Lennox, who gave not the slightest sign of feeling less than totally at home on the stage.

Lennox got a laugh as he recalled the fellow university student who asked if he was a Christian before interrupting himself to apologize, “Oh, sorry, sorry, you’re Irish.”  This opened up a rich vein for discussion of the differences between cultural religion and “religious religion,” as Rubin explained how in his background it’s taken almost for granted that actual belief is a non-essential component of Judaism, while Lennox told the old joke that there are no true Irish atheists, just Catholic and Protestant atheists.

Lennox shared wonderful memories about the Christian example set by his parents, who, while not intellectuals themselves, encouraged him to pursue Christianity rationally. They also put skin in the game to back up their confession of faith, as his father made the dangerous decision to employ workers across battle lines at his small business. This combination of intellectual and personal integrity set Lennox on the course he’s stayed to this day.

The theme of personal integrity also ran through Rubin’s reflections on touring with Jordan Peterson. He said that he was compelled by Peterson’s fusion of religious and psychological ideas, but he was equally impressed by who Peterson was off the stage. In a day where the advice never to meet your heroes feels more apt than ever, this was a refreshing and encouraging reminder that genuinely admirable people still exist. For me, it was also a sad reminder of how the death of heroes has contributed to our culture’s crisis of meaning among young people.

Dave’s Peterson reflections provided some humor too, as he swore that Peterson never broke any of the twelve rules, including the last one about petting cats. He observed the latter at a dinner party thrown by British fellow Intellectual Dark-webber Douglas Murray, where Jordan gave Douglas’s cat some serious quality time. (Douglas Murray nerds, let the speculation begin as to the name of said cat. My bet is on “Bosie,” other answers on a postcard.)

Murray is one of several “IDW” members I recently profiled for Premier Christianity. As Peterson has gone on hiatus, he has received more recent attention with his book The Madness of Crowds (reviewed by me at Arc Digital here), which focuses on the cultural obsession with identity politics that has become a kind of substitute religion. In conversation with Lennox, Rubin independently made some points similar to Murray’s, pointing out that it’s easier said than done to “unhitch” culture from religion. We are seeing that quite literally anything can go when people look for other places to put their religious instincts. It seems surreal that truth itself could be labeled “a construct of the Euro-West,” yet that’s the post-modern predicament we now find ourselves in.

This is one among many strands in the meaning crisis, a crisis which includes numerous young people in Lennox’s home country. While Northern Ireland has descended into post-Christendom more slowly than its neighbors, it could still fairly be called post-Christian now, perhaps in large part because of the scandals that have rocked the Catholic Church. Like the rest of the UK and the continent, Ireland’s youth are rootless, aimless and searching.

Further, as Rubin thoughtfully pointed out, they must do so in a world where we are paradoxically both more and less connected with each other than ever before. We carry the world’s library in our pockets, yet we’re forgetting what it means to make tangible contact with other human beings. Lennox added thoughts about the cruelty of social media, which his generation can’t fully understand but whose tyrannical sway he recognizes. This is also a point Murray makes in his new book, as he suggests that technology’s new penalties for action have driven young people into a semi-paralyzed state of inaction. They have all the machinery of guilt literally at their fingertips, but none of the machinery of forgiveness.

David Bowie figured it right twenty years ago: The Internet was never going to be “just” a tool. It would be an “alien life form” unto itself, equally capable of incalculable good and incalculable damage.

A step of faith

In diagnosing the meaning crisis, it is popularly touted that religion has receded as science (sorry, Science) has advanced. We simply can’t unlearn what we’ve learned now. The bridge is burned, and there’s no way but forward. There’s none better to dispel this myth than John Lennox, and he did so beautifully in this dialogue. Faith, he persuasively argued, is not a leap into the dark but a step into the light. It’s not a blind choice, but a choice that’s well-evidenced. Indeed, science itself points to God.

Not that Lennox got much pushback from Dave on this point. Dave, as he repeated several times after some prodding that became a running joke, is open to the idea of faith. In one of the night’s most touching moments, he re-told a story about a couple at a Peterson event facing the double blow of her miscarriage and his Stage 4 cancer diagnosis. When casting about for words to say, all he came up with was “God bless you.” What did this mean? Is it evidence of something? He’s still thinking about it.

Here, Lennox deftly wove together the cerebral and the personal by saying it’s one thing for us to climb our way up to God, but it’s another thing for God to reach back. Intellectual arguments have their place, but prose must be connected with poetry and head with heart. For him, the problem of evil is a personal struggle, especially when he contemplates unfathomable horrors like Auschwitz. It was in the face of such horror that a Catholic priest found himself speechless when confronted by a bitter young Elie Wiesel, as he writes in the introduction to Night. Here is where reason must turn to revelation.

Dave certainly agrees there’s something (someone?) “out there” that (who?) is “bigger than all of us.”

Justin Brierley: “Could you put a name to that?”

Like the kid at Bible camp who’s asked “What’s the small rodent that climbs trees and has a bushy tail?” Dave kind of suspects it’s a squirrel, but he’ll say “Jesus?!?!”

Jesus is just all right

“I have no problem with Jesus,” says Rubin. “I like the guy!” Do unto others, etc., who couldn’t be on board with that? As gurus go, you could definitely do worse than JC.

Rubin’s fellow West Coast secular Jewish Dark-webber Bret Weinstein echoed similar thoughts in a spat on Twitter recently. The difference was that Bret expressed alarm at what it would mean for Christians not to agree with him. Keep the moral teaching, he advised, but leave the “magical claims” behind. It’s better for everyone, plus it gives him the willies when people make trending hashtags like #JesusistheSonofGod.

To his credit, Bret later came back with a thread apologizing for what seems to have been some sincere ignorance about what Christianity in the West still means to a good number of us. Like Rubin, he grew up with a secular Jewish understanding of how this whole religion thing works. Some nominal Anglicans could relate. In Britain, an Anglican priest is thought rather odd if he doesn’t think of God as an optional extra.

But some of us think C. S. Lewis still had it just about right: Either Jesus was a good man, or he was a bad man. If he was a bad man, he was either lying or insane. In no scenario is he just The Dude. And in one scenario, he’s literally God incarnate, come down from Heaven for us men and for our salvation to get nailed on it like some Schlemiel.

To quote that great philosopher of religion, Yente the matchmaker, “If God lived on earth, people would break his windows.”

“I want to relate to people as whole persons – not just as evangelism fodder.” This is the voice of mildly annoyed John Lennox, in the one bit of the dialogue where he gets even mildly annoyed. Does he want Dave Rubin to convert to Christianity? Yes, of course he does. But also, he’d like to get to know Dave Rubin a bit.

Debates make for good spectator sport. But as Ben Sixsmith wisely writes in a recent Spectator article, they are neither the only nor the best vehicle for communicating contrasting perspectives on important topics. Sometimes, as was the case here, the idea of debate doesn’t even make sense. Sometimes, it’s okay to just have a chat and see where it goes.

Who knows if Dave Rubin will walk away from this particular chat and become a Christian? He still has to figure this out. (And, in an interesting passing moment, he suggests that there might be some Christians in the audience who are quietly trying to figure it out too.) If Christians want to re-seed Western Civilization, they will have to learn to see conversation as a valuable end in itself, not always or necessarily a means to an immediate end. That includes not just barbed atheist intellectuals, but the mellow coastal dude for whom Jesus is just all right. And it includes not just celebrities, but your own friends and co-workers.

They may not be able to talk to John Lennox. But they can talk to you.

ESTHER O’REILLY is a maths PhD student and freelance writer. She blogs at patheos.com/blogs/youngfogey