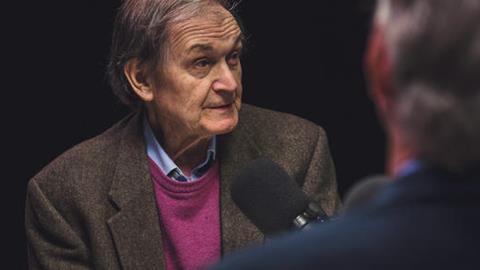 Roger Penrose can’t escape an ultimate explanation for the universe

Sometimes, amidst the rough and tumble of YouTube comments, a diamond appears. While watching the recent Big Conversation episode on ‘God and the Universe’ hosted by Unbelievable? host Justin Brierley, I noticed that one wag had commented: “Justin’s facial expression throughout this discussion seems to suggest he has died and gone to heaven.”

As an astrophysicist interested in the connection between science and faith, I’d have been similarly delighted to have the opportunity to chat with Sir Roger Penrose and William Lane Craig. Both are major players in their respective fields of cosmology and philosophy, with a good deal of overlap when it comes to the ‘ultimate’ questions they both confront.

And we weren’t disappointed. Their highly-anticipated conversation ranged over various metaphysical and cosmological matters. Here are just a few of the highlights that struck me.

The dialogue starts in metaphysical territory, with Penrose and Craig both agreeing that a complete worldview must find a place for three different aspects of reality - the mental (consciousness, the mind, thought and feelings), the physical (the universe we live in) and the abstract (especially the language of mathematics). These could be summarised as the three Ms – the Mental, the Material and the Mathematical.

Unlike many of his atheistic colleagues in science, Penrose acknowledges that these various realms of reality present ‘three great mysteries’ in the way they connect and support each other. For instance, the way that the physical realm is described with such extraordinary precision by the abstract realm of mathematics, seems to be crying out for an explanation.

Where did they come from and how do they relate to each other? Are they simply separate realms, or can one realm rule them all? Craig has an interesting response.

The abstract realm cannot ground the unity of these three, after all abstract things cannot be causes – the number 7 can’t have an effect on anything. It is ‘causally effete’ as Craig says.

We certainly experience mental events causing physical events, like intentionally raising my arm. The ideas of a mind could also account for the abstract realm (e.g. mathematics) if that mind is metaphysically necessary (so that mathematical truths are necessary) and omniscient (so that all abstract truths are thereby accounted for). So Craig asks: what if the solution to Penrose’s mysteries lies in postulating an immaterial, infinite, omniscient, and metaphysically necessary consciousness that is the source of the mental, physical and abstract realms?

So how does Penrose respond?  The cosmologist’s main objection to an infinite mind is that it is “too vague to know what to do with.” I can sympathise, as I suspect that this reflects a physicist’s expectations of what a fruitful explanation looks like.

For example, in Einstein’s equations of general relativity, a physicist can explore mathematically-formulated worlds – black holes, expanding universes, gravitational waves and more. We are both constrained and free:  one master equation to obey, but many solutions to the equation to explore. But what are we supposed to do with a “non-physical, infinite, metaphysically necessary and omniscient mind” – all words, no equations?

Penrose seems to want an idea which – like general relativity – he can sink his mathematical teeth into. But this would simply amount to enthroning mathematics again. It would just throw us back into the “why is this particular mathematical truth instantiated, rather than another?” dilemma.

Perhaps Craig is on to something. Some explanations by their nature transcend the mathematical and physical worlds that they are seeking to explain.

The discussion moves on to Penrose’s Conformal Cyclic Cosmology (CCC), which aims to remove the singular beginning of our universe and solve the problem of its seemingly special “low-entropy” beginning.

Both of these cosmological discoveries have been used by William Lane Craig to suggest that there is evidence for a creative intelligence behind the cosmos. The philosopher is well-known for using Big Bang cosmology as supporting evidence for his ‘Kalam Cosmological Argument’ that the cause of the universe must be God.

So does Penrose’s CCC model remove the needs for a beginning? The theory predicts that our universe is one ‘cycle’ in a sequence of universes that emerge over vast ‘eons’ of time as the energy runs out in each cycle. Penrose claims that, as well as solving these problems, there is empirical evidence of a remnant from a previous cycle.

As a cosmologist, I’ve been closely following Penrose’s model, and I firmly believe a dose of reality is needed. Penrose notes that his model has not convinced many cosmologists, and there are good reasons for this.

Firstly, the model first appeared in a 4-page conference proceedings in 2006 and in a popular-ish level book in 2010, but didn’t appear in a peer-reviewed paper until 2018. For non-scientists, this is a bit like hearing that a movie has not been screened for critics before release.

The papers contain rather few equations, and require a hefty amount of new particle physics to accompany the new cosmology. His 2012 conference paper finishes with the comment, “Clearly CCC raises many issues here which need detailed checking for their internal consistency.”

Secondly, the claimed observational support for the model is entirely unconvincing. Penrose mentions the most recent claims (“99.4% and all that”), but there have now been three cases in which “claimed evidence for the CCC turns out to be nothing.”

In 2010, a paper claimed to find CCC-consistent ring patterns in the cosmic microwave background, but these were refuted by three independent studies in 2011. In 2013, CCC advocates claimed to find sets of concentric rings, only to be debunked again.

Finally, in this interview, Penrose discusses the 2018 claim that there are rings with a large temperature gradient across their width. Despite the talk of a greater than 99% probability, Dylan Jow and Douglas Scott in September 2019 (after this dialogue, which was originally recorded in May) showed that the analysis must account for the fact that the CCC doesn’t predict a specific scale for the size of the rings. Once this is done, the features identified by CCC advocates can be found in at least 13% of random simulations of the sky, that is, simulations where we know by construction that no such ring is actually present.

Despite Penrose’s evident brilliance and commitment to the theory, CCC remains an unproven and highly speculative hypothesis.

Can we escape the beginning?

Clues regarding the beginning of the universe have oscillated back and forth over the last century. The standard cosmological model has a beginning… but perhaps asymmetries would remove the beginning? Then Penrose and Hawking’s singularity theorems ruled those models out. Then inflationary models were proposed that might evade these theorems, until stronger theorems were discovered. But those theorems may or may not apply to a properly quantum theory of gravity, and so on. So are we getting anywhere?

There is an important difference between the two types of clues. Cosmological models with a beginning were discovered as we tried to account for empirical data. Models without a beginning were invented for the express purpose of avoiding a beginning, and sometimes failed to do so. No one ordered a beginning.

Whatever their differences when it comes to the ultimate explanation, it’s a delight to see an eminent physicist and philosopher address deep metaphysical questions, without pretending that science has answers it doesn’t have, or assuming that the limits of science are the limits of knowledge.

Each advance of physics has highlighted our desire to have, and science’s failure to provide, an ultimate explanation of existence. Is the deepest layer of reality more like matter, mathematics or mind? The viewer will need to decide for themselves whether Penrose’s protest of vagueness against a fundamental mind is convincing.

Luke A. Barnes is a postdoctoral researcher in astronomy and cosmology at Western Sydney University. He is the author, with Geraint Lewis, of “A Fortunate Universe: Life in a Finely Tuned Cosmos” and “The Cosmic Revolutionary’s Handbook”.