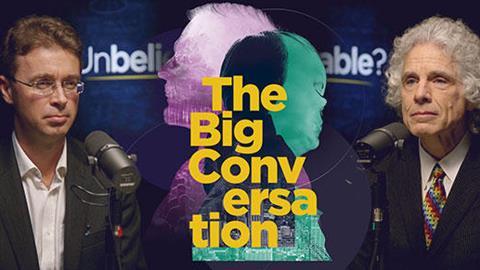 The contemporary world pulls us in opposite directions every day. The politician you support, the worldview you subscribe to, even the theologian you read… In almost every important category of life the demand to pledge your allegiance to one side or the other is almost irresistible.

This dualism isn’t new of course. But the pressure to nail your colours to the mast has been intensified in the age of social media. Liberal vs conservative, Brexit vs Remain, even more absurdly, Yanny vs Laurel.

Into this mix comes a more fundamental debate. Is the world getting progressively better? Or is that an illusion? An article of faith?

Pitted against each other in this discussion are prominent commentators and academics. The sceptics of progress include traditional conservatives like Sir Roger Scruton and voices who may better be described as post-liberal, such as John Gray. The undoubted champion of the view that the world is getting better is Steven Pinker.

As a figurehead, his credentials are undeniable. A Harvard academic, he has spent a career researching language and evolutionary psychology. In his recent popular works, he has become the leading advocate of progressivism. In 2011’s The Better Angels of our Nature, Pinker argued that violence is declining and listed the reasons for why. This was followed up in 2018 by Enlightenment Now: The Case for Reason, Science, Humanism and Progress, which makes the case for the values of the Enlightenment of the 17th and 18th Centuries being behind the increase in safety, peace and happiness the world currently enjoys.

Pinker’s prodigious use of data to bolster his arguments makes it hard to refute some aspects of his work. He carefully marshals graph after graph to support his thesis – that in almost every aspect of our lives, things continue to improve because of the scientific and philosophical revolution we now call the Enlightenment.

A calm yet, robust discussion of this kind, across difference, is needed more than ever

One of Pinker’s key arguments is that faith is not a force for good. He states simply, “appealing to supernatural forces, appealing to doctrines that only people [who] are born into a particular religion share or that they can’t be persuaded of, does go against progress.” While acknowledging that religious institutions themselves can be forces for good, Pinker’s view seems to be that faith and progress are antithetical to one another.

His argument is exceedingly popular. Bill Gates hyperbolically described Enlightenment Now as his “new favourite book of all time”, while billionaire investor Warren Buffett joined the chorus of approval.

The criticism has also been vociferous. Some have pointed out that Pinker’s arguments are at odds with what many Enlightenment thinkers actually believed. John Gray took a flamethrower to Pinker’s thesis in the New Statesman. “Judged as a contribution to thought, Enlightenment Now is embarrassingly feeble”, Gray wrote, “with its primitive scientism and manga-style history of ideas, the book is a parody of Enlightenment thinking at its crudest.”

Once again, we find ourselves with a duality, seemingly forced to choose. Are we with Pinker and Gates in the vanguard of progress? Or should we double down on our faith and ignore anything that Pinker can teach us?

Fortunately, the second episode of The Big Conversation from Unbelievable? offered an altogether more appealing response from Christians.

Nick Spencer from Theos, a British Christian think tank, took on Pinker in a fascinating discussion. Rather than hitting back at Pinker straight away, Spencer acknowledged the careful scholarship and arguments Pinker was making. He sought to find common ground.

Their differences soon became clear however and, in a way quite unlike I’ve seen from Pinker’s interlocutors before, Spencer quietly and politely dismantled most of Pinker’s statements.

Full disclosure – I’m a fan of Nick’s work, and he helped co-write a project I worked on for Theos a few years ago. But this isn’t simply my partisan conclusion. The way in which Spencer shot back with factual rebuttals seemed to surprise Pinker.

Spencer’s knowledge of the intellectual history of the Western world is clearly superior to Pinker, and it showed. When Pinker pointed to the Universal Declaration Of Human Rights as an achievement of non-religious, humanist morality and had “not a shred of Christianity in it”, Spencer immediately fired back that the UDHR was, in fact, authored by a Lebanese Christian, Charles Malik, and that it was heavily influenced by Catholic Social Thought.

Spencer went further, though, and challenged Pinker’s assertion that faith is a block to scientific progress – outlining how the scientists at the helm of the Enlightenment were theists, often Christians. ”One of the distinctive factors,” Spencer argued, “is the Christian doctrine of creation that legitimised and encouraged the study of the natural world as a way of understanding and glorifying God.” “That was the water everyone swam in, the air they breathed,” Pinker retorted. It didn’t sound convincing.

The reason this show was important is that it avoided the trap that so many of us are prone to falling into in contemporary debate. Spencer didn’t feel the need to vilify Pinker. Instead he gently probed and called out the incorrect assumptions fairly and gently when he saw them. For his part, Pinker was cordial and urbane and reiterated his arguments well. It was a grown-up discussion.

Pinker’s supporters may well have seen a different ‘victor’ in the discussion than I did. I’m metaphysically invested in his arguments being wrong. As a Christian, it’s important I’m honest with myself about that. As one cynical wag in the Youtube comments stated, “Wow the person in the talk whose beliefs aligned with my presuppositions sure walked away with this one”.

But I don’t want my ‘side’ to win, just for the sake of victory and I don’t want the other side to ‘lose’. The reason The Big Conversation (and its parent programme, Unbelievable?) are so important is that we live in fissiparous times. With conspiracy theorists and crackpots encroaching on the mainstream in increasing numbers, a calm yet, robust discussion of this kind, across difference, is needed more than ever. This spirit of inquiry, wrestling and seeking truth is, after all, what the Enlightenment was about and, for me, what having a faith is all about too.

Andy Walton is a freelance writer and broadcaster. He is on twitter @waltonandy