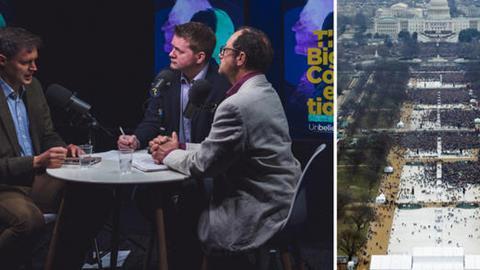 Fake News? Did the Gospel writers get the facts right but their stories wrong?

In the most recent episode of Justin Brierley’s fantastic series The Big Conversation, biblical scholars on opposing sides of the spectrum debated and discussed the reliability of the Gospels.

It was the famous agnostic and former evangelical Bible scholar Bart Ehrman in conversation with Christian New Testament expert Peter J. Williams and, if you haven’t heard it yet, it’s definitely worth a watch.

A lot was said—a lot wasn’t said—and in an hour long conversation there’s only so much ground that can be covered but the ending of the conversation, Ehrman’s closing remarks, summed up quite well how I felt when the whole thing was said and done.

Ehrman remarked that what we’re often running up against when we talk about things like the Bible is a confirmation bias.

When talking about the Gospels, when reflecting on their nature or historicity or reliability, we’re often seeking out experts who simply confirm what we already believe. And he’s not wrong. As Christian believers, we foist up sources and scholars who affirm that the Bible can be proven historically accurate and reliable and we tend to diminish or dismiss experts who say otherwise.

It’s the nature of the beast: it’s too psychologically straining to hold too many views in contradiction so we give less weight to those with which we disagree. It’s a well-known phenomenon and I’ve even spoken to guests before, on my podcast, when unpacking why some evangelical Christians become Catholic. It’s a piling up of evidence which eventually leads to a complete paradigm shift, and it’s certainly no easy thing. When I converted to Catholicism, as an evangelical, it was a difficult and confusing process.

Ehrman is not wrong about evidence and bias; he had a paradigm shift of his own and his challenge, in his closing remarks, is that we consider more deeply the evidence for the reliability of the Gospels and not simply believe something we first learned when we were “fourteen.”

And, of course, it’s a worthy challenge but it doesn’t make Ehrman right.

As a Catholic Christian, I believe firmly in the ability of reason to prove God as much as faith buoys that up. I’d wager this is in stark contrast to the fundamentalist camp which Ehrman left as a former evangelical. I know this type of believer; where God and His Son and the reliability of the Scriptures must be believed in faith. And that, I think, can be very dangerous.

Even more as a Catholic convert, I’ve come to deeply appreciate, love even, the historic approach of the Church which delineates a clear place for reason alongside of faith going all the way back from Thomas Aquinas in the Middle Ages to Augustine in the Early Church.

So when Ehrman says we must look at the evidence—in other words, use our reason—I think he’s on good grounds and flying in the face (and rightly so) of those who would suggest that we must take the Bible on faith alone.

But does a reasonable look at the Gospels prove that they’re unreliable? He seems to think so.

Obviously, I do not.

Gospel Writers Got Details Right But Their Stories Are Wrong

Ehrman starts his critical analysis by explaining that just because someone—the Gospel writers—got their geography right doesn’t mean that their stories were true.

In an admittedly brilliant example, Ehrman brings up the number of attendees at President Trump’s inauguration. Despite the high numbers claimed by Trump, actual photographic analysis showed a much smaller number of people were actually present. Yes, there certainly was an inauguration but what one witness, President Trump, says about it isn’t true. Just because he was there, knew the inauguration happened, and experienced the events, doesn’t mean he could speak about it reliably.

In other words, just because scholars contend that the Gospel writers got their facts of the locations and many minute details right about Palestine at the time of Jesus, it doesn’t mean that the stories they tell were true as well.

But why are we to disbelieve the Gospel writers?

To further draw out Ehrman’s example, skeptics of President Trump analyzed pictures of the inauguration and used these to demonstrate that he was exaggerating precisely because he was known to exaggerate. Because experience and outside sources indicated that, in the past, President Trump was known to employ hyperbole. As a result, his claims were under particular scrutiny.

But no such precedent exists for the Gospels.

In fact, I’m reminded of something historian and author Steve Weidenkopf said when I spoke to him about this exact topic. There are no sources which contradict the narratives of the Gospels. If the content of the Gospels weren’t true and were easily proved otherwise then we should find sources to say so. But we don’t. We don’t have, as in the example of the inauguration, past experience and outside knowledge to point in a skeptical direction.

No one else is writing at the time of the Gospels to say, “Hey, Jesus lived but what these guys are saying about him is wrong.” No Roman sources, no Jewish sources, no sources whatsoever.

In fact, to extend our example even further, Paul in his epistles tells us that hundreds have seen the risen Jesus and that these stories—the stories of his life and death and resurrection—can be heard from hundreds of other witnesses. Paul points to outside sources to say the equivalent of, “Go, go and ask them if you don’t believe me!”

A claim that President Trump could not make because a review of the evidence would’ve proven him wrong.

With this in mind, I don’t believe for a minute that Ehrman has successfully brushed this evidence in favour of the Gospels’ reliability off the table.

It follows that because the Gospel writers got their facts and details right that they may have also been telling the truth. In fact, precisely because their facts and minute details about life in first century Palestine are correct it lends significant credence to their claims, especially because we have no reason, past experience, or outside sources to make us question otherwise.

Don’t Internal Inconsistencies Lead Us to Doubt the Gospels’ Reliability?

Of course, one reason why Ehrman could cite for questioning the reliability of the Gospels, even though their facts are right, is that they are internally inconsistent. That is, the accounts of Jesus’ life, death, and resurrection do not match up in the four Gospel accounts. But, here, Ehrman points to inconsistencies which are reconcilable. Granted, some of these reconciliations are challenging, they are far from impossible.

For example, the one irreconcilable difference which Ehrman cites in the course of the conversation is the death of Judas. In Matthew’s Gospel account, Judas died by hanging (Matt. 27:5). In the account by Luke, written in Acts, Judas fell headlong into a field, burst open in the middle, and all his entrails gushed out (Acts 1:18). Graphic, to say the least.

But despite Ehrman’s assertion that these accounts can’t be reconciled, that they are too radically different, simply isn’t the case.

For one thing, it is accepted by scholars that Luke was a doctor and would’ve had, by profession, greater access to both medical knowledge and terminology. While Matthew records that Judas hung himself, Luke could simply be expanding on what happened following the hanging. It’s not implausible, for example, to think that Judas hung himself and was left to rot for a period of time in the hot sun—the next day was the Sabbath, we know—and when he was finally taken down from wherever he hung himself, after he was found, his body may have been significantly decomposed and may have “burst open.”

After all, how does one fall headlong into a field and burst open spontaneously?

This should demonstrate, at the very least, that the differences cited by Ehrman—even the example he chose to bring up in the discussion—are not as irreconcilable as he suggests.

At any rate, a study of the evidence for the reliability of the Gospels does not, de facto, lead someone to lose their faith or change their opinion of their historical nature. And while it isn’t always the case that just because someone got their facts right about an event they also got the event right, in the case of the Gospels—although not in the case of Trump’s inauguration—we have no good reasons to doubt the events. In fact, the true account of the details serves to bolster the accounts of the events themselves. And, finally, just because one can point to supposed contradictions in the Gospel accounts does not automatically undermine the stories that they tell. Instead, it can be demonstrated that these apparent contradictions can be explained.

With all of this in mind, do the Gospels demand a close, critical and historical look? Most certainly. But where Ehrman says that they will bend and break under such scrutiny I am not at all convinced.

Listen to his podcast: http://podcast.thecordialcatholic.com/