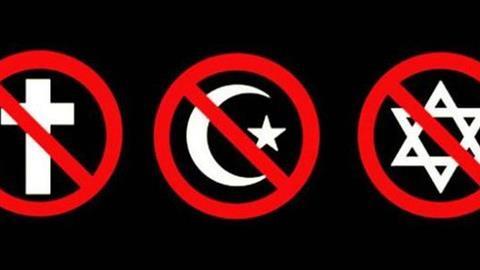 The title of my book - Atheism Kills - seems to have unleashed an apocalyptic hate-fest of epithets, insults and general cantankery at the proposition that atheism as a governing ideology kills.

But I still believe the ideology of atheism is deeply destructive. The atheist rarely contemplates the following five uncomfortable truths. But they need to. There are consequences to the atheistic mindset. And they are all horrific.

1. Atheism is responsible for more deaths than Judaism or Christianity

Fascism and communism - both of which were atheist ideologies - murdered more than 150 million people in the 20th Century alone.

Communist and other godless regimes have continued to kill hundreds of thousands since. Add the millions of rapes, tortures and enslavements by these same godless regimes, and you’ve got yourself a pretty ugly picture.

The atheist’s favorite ‘go to’ accusation against Christianity includes the Inquisition, the Crusades, the Salem Witch Trials and the church paedophilia scandal. However, even assuming that all such wrongs occurred as a direct result of church doctrine (they did not, but let’s assume so), the numbers dwarf in comparison to what atheism has wrought.

The Crusades involved the deaths of approximately 1.5 million people. Most of them were soldiers on both sides, as well as people who died of disease and other peripheral causes. The Inquisition resulted in less than 5,000 deaths over a span of approximately 300 years. The Salem Witch Trials spanned just four months, resulting in a total of 19 killed.

There are other so-called ‘killings’ that occurred as a result of religious fervor (the French Religious Wars, the 30 Years War, and so forth), but even adding all those up, you could not even reach ten per cent of the numbers of deaths that godless regimes have caused.

To argue that “religion has caused more death than anything else” is a quip that has no basis in fact.

2. Hitler was not a Christian

Atheists routinely urge that the Nazis were Christian, invoking Christianity to justify their horrors. This is false.

Nazism and fascism never held themselves out as Christian enterprises. More particularly, Hitler himself despised Christianity. He saw Christianity as “meek” and “flabby” and sought to destroy it “root and branch”. He bemoaned why Germany was “stuck” with “feeble minded” Christianity and preferred other “strong-arm” systems.

Hitler’s writings and speeches are so full of passages dripping with contempt for Christianity that to argue he was Christian is like arguing George Washington fought for the British during the Revolutionary War.

3. Atheism is an ideology - whether you realise it or not

The most common argument is that atheism is not an ideology; it merely reflects the absence of faith in religion. They just don’t believe in God. Why can’t we please leave them alone?

But it turns out they don’t want to leave you alone. On social media most atheists are bizarrely vocal about their contempt for Christianity and, to a lesser extent, Judaism, for their beliefs. They believe these religions frustrate progress. They argue with great passion that we’d be better off if we just eradicated God once and for all. Godless regimes have always sought the eradication of God with passionate zeal, deadly efficiency on a mass scale, and unspeakable cruelty.

4. People of faith are responsible for a huge amount of good in our society

Atheists don’t give credit for what the Church and Judaism have done for civilisation: the creation of our notions of justice, the hospital system, the university, public schools, charity, progress, truth and freedom itself.

A world centered around God has allowed us to pursue the great blessings of God: beauty, justice, truth and freedom itself. Such things mean nothing without God’s presence.

Atheists may enjoy such values, and even benefit from them, but they are only living off of what others have created. There is no real reason to pursue any of these values without a sense of purpose. Purpose itself is meaningless without God.

This is contrary to the notion of “civilisation”. By definition, civilisation contemplates a future that is better than our present, and we derive lessons from the past to do so. Civilisation does not mean we just have a good time on the planet while we are here; civilisation means we seek a better vision for our collective future. We know this instinctively, but many never quite incorporate it into their worldview.

Barak Lurie is a former atheist. He is the host of The Barak Lurie Show, a big-picture look at politics, religion and law in the news. He advocates the importance of God in society, using reason, history and science to expose what he believes are atheists’ flawed philosophies. His book Atheism Kills:The Dangers of a World Without God – and Cause for Hope is out now