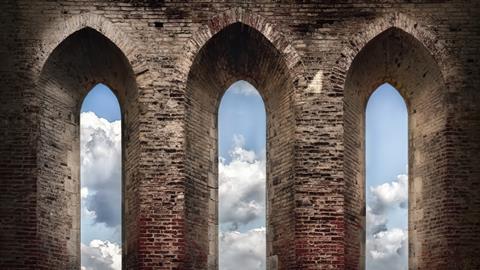 Why do Christians believe God is trinity?

Writer Steve Schramm explores one of the strangest Christian doctrines

One of the most shocking and fundamentally absurd teachings of Christianity is that God is trinity: three beings, one person. The so-called Chalcedonian Creed lays out the Christian position with undeniable clarity:

“We, then, following the holy Fathers, all with one consent, teach people to confess one and the same Son, our Lord Jesus Christ, the same perfect in Godhead and also perfect in manhood; truly God and truly man, of a reasonable [rational] soul and body; consubstantial [co-essential] with the Father according to the Godhead, and consubstantial with us according to the Manhood; in all things like unto us, without sin; begotten before all ages of the Father according to the Godhead, and in these latter days, for us and for our salvation, born of the Virgin Mary, the Mother of God, according to the Manhood; one and the same Christ, Son, Lord, only begotten, to be acknowledged in two natures, inconfusedly, unchangeably, indivisibly, inseparably; the distinction of natures being by no means taken away by the union, but rather the property of each nature being preserved, and concurring in one Person and one Subsistence, not parted or divided into two persons, but one and the same Son, and only begotten God (μονογενῆ Θεὸν), the Word, the Lord Jesus Christ; as the prophets from the beginning [have declared] concerning Him, and the Lord Jesus Christ Himself has taught us, and the Creed of the holy Fathers has handed down to us.” (Chalcedonian Creed)

One may wonder why it takes an entire paragraph to define an idea which seems as if it could be handled by an analogy. For example, comparing the triunity of God to a three-leaf clover, different states of matter, or some other piece of shared human experience where three things in one sense are experienced as one thing in another.

However, this kind of thinking always leads to error. Most (maybe all?) analogies to which one might refer actually end up capturing some form of heretical teaching that has been denied by early Christians, such as modalism or Arianism. A discussion of these teachings lies beyond the scope of this piece, which seeks to answer the simple question why Christians believe this seemingly strange doctrine in the first place.

“For the Bible tells me so”

The use of senses, logic and philosophy alone would make it quite difficult to prove that God is triune. There are, however, some interesting things worth considering. As an example, arguably the oldest philosophical problem is known as ‘The problem of the one and the many’. Some Christian philosophers have proposed that the trinity actually provides the only consistent answer to this conundrum.

Nevertheless, there is one concrete place from which to learn about the triune nature of God: the Bible! On this matter, a Christian cannot waver. To be a Christian just is to be trinitarian in belief, because it requires believing that God—specifically, the second person of the trinity—has revealed himself in the incarnation of Jesus Christ.

Strangely enough, the word ‘trinity’ is not actually found in the Bible. That does not, however, mean that the Bible does not teach the concept. All Jews—yes, including the Rabbi Jesus himself—believe in the fundamental Jewish teaching that Yahweh is one God, and God alone.

Deuteronomy 6:4 emphatically states: “Listen, Israel: The Lord our God, the Lord is one.” (CSB)

And yet, Jesus leaves no doubt about his relationship—and unity—with Yahweh. There are numerous examples of this in the New Testament, many subtle and not as easily detectable to English readers. Some, however, are crystal clear:

“When Jesus was baptised, he went up immediately from the water. The heavens suddenly opened for him, and he saw the spirit of God descending like a dove and coming down on him. And a voice from heaven said, “This is my beloved Son, with whom I am well-pleased.” — Matthew 3:16-17 (CSB)

“If I glorify myself,” Jesus answered, “my glory is nothing. My Father—about whom you say, ‘He is our God’—he is the one who glorifies me. You do not know him, but I know him. If I were to say I don’t know him, I would be a liar like you. But I do know him, and I keep his word. Your father Abraham rejoiced to see my day; he saw it and was glad.” The Jews replied, “You aren’t fifty years old yet, and you’ve seen Abraham?” Jesus said to them, “Truly I tell you, before Abraham was, I am.” So they picked up stones to throw at him. But Jesus was hidden and went out of the temple. — John 8:54-59 (CSB)

We also have evidence from Jesus and other New Testament writers about the third person—the spirit of God:

If you then, who are evil, know how to give good gifts to your children, how much more will the heavenly Father give the Holy Spirit to those who ask him?” — Luke 11:23 (CSB)

Paul, a servant of Christ Jesus, called as an apostle and set apart for the gospel of God—which he promised beforehand through his prophets in the holy scriptures—concerning his son, Jesus Christ our Lord, who was a descendant of David according to the flesh and was appointed to be the powerful Son of God according to the spirit of holiness by the resurrection of the dead. — Romans 1:1-4 (CSB)

Thus, in the New Testament, there is little doubt the Bible teaches there is one ‘being’ who is God—and yet, he is three in person. Some people raise the objection that these are just merely different manifestations of the same person, such that there is truly only one. But this denies the biblical witness for the simple reason that these persons are sometimes seen speaking to one another (Matthew 3:16-17). Perhaps even more surprisingly, this happens in the Old Testament as well.

The Old Testament, also known as the Hebrew Bible, must be considered in any biblical discussion of the trinity. Recall the adamant Jewish belief mentioned above that God is one. How does that reconcile with the New Testament Christian belief that God is triune?

You may be surprised to find there is a preponderance of evidence—both within the biblical text itself and from ancient Jewish Rabbis—that there is a known category for the multiplicity of God. The ancient Jewish doctrine known as the ‘Two powers in heaven’ drew a distinction between Yahweh and ‘The angel of Yahweh’, and yet many passages blur that distinction, making them, in some sense, the same person.

But the angel of the Lord called to him from heaven and said, “Abraham, Abraham!” He replied, “Here I am.” Then he said, “Do not lay a hand on the boy or do anything to him. For now I know that you fear God, since you have not withheld your only son from me.” (CSB)

In this passage, Yahweh and the angel of Yahweh are taken to be the same person. In his landmark work The Unseen Realm, Heiser notes of this encounter:

The first thing to notice is that when the angel of Yahweh speaks to Abraham, Abraham recognises the voice. He does not ask the identity of the speaker, as though the voice is unfamiliar. He does not fear that he is harkening to the voice of another god. The reader, however, knows that the source is not Yahweh per se, but the angel of Yahweh. The word translated “angel” here is the Hebrew word mal’ak, which simply means “messenger.” The next observation is very important. The angel speaks to Abraham in verse 11, and so is distinguished from God. But immediately after doing so, he commends Abraham for not withholding Isaac “from me.” There is a switch to the first person which, given that God himself had told Abraham to sacrifice Isaac (Gen 22:1–2), seems to require seeing Yahweh as the speaker.

Much more evidence of this has been documented, for example in Alan Segal’s Two Powers in Heaven as well as Heiser’s doctoral dissertation, The Divine Council In Late Canonical and Non-Canonical Second Temple Jewish Literature.

A solution, not a problem

According to Christian teacher Greg Koukl, the trinity is a solution, not a problem. While many think Christianity is absurd or fantastic because of this radical claim, it is amazing how, when applied practically to many philosophical issues, the unique doctrine of the trinity comes to the rescue.

For example, the Bible claims that God is love (1 John 4:8, 16). But if God was bound by eternally existent loneliness sans creation, how could God be love? If triune, however, the eternally existent God existed in a communal, loving relationship between the father, son, and spirit.

As touched on above, there is ‘The problem of the many’. At least conceptually, the trinity can provide a foundational category for that strange property of reality which acknowledges how we often experience things as both one and many. (Though, we should be careful not to suggest that the trinity is something compositional in nature.)

For Koukl, the primary reason the trinity is a solution, not a problem, is because it makes the most sense of the scriptural data:

The trinity, properly understood, is a solution, not a problem. Why? Because if you believe in the Bible, yet reject the trinity, you’re faced with serious and unsolvable textual conflicts. There’s only one solution that makes sense of all the data. The trinity is the only way of understanding God’s nature that holds all of the scriptural data intact.

Belief in the trinity matters, because it is wholly inseparable from the gospel of Jesus Christ. It is a beautiful doctrine, and a wonderful testament to the glory of God.