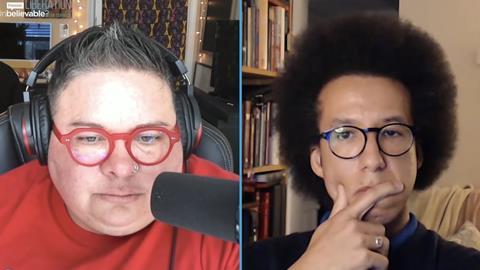 When Jesus becomes a trigger word in Woke theology

Is language violence? Are anecdotes replacing facts? Erik Strandess reviews a recent debate on the limits of ‘woke theology’.

In a recent edition of Unbelievable?, anti-woke Anglican ordinand Calvin Robinson engaged with Transqueer Latinx theologian Dr Robyn Henderson-Espinoza on whether ‘woke’ theology is creating a more inclusive faith or a dangerous diversion from historic Christianity.

While wokeness is often used as a pejorative, I think for the sake of this conversation “woke” theology can be defined as a theology that skirts the outer limits of historical orthodoxy. A theology that knocks on the church door and an orthodoxy that fears opening it up will widen the gate leading to destruction.

The question before us then is whether “woke” theologies sculpt previously unappreciated contours of the Christian faith or mar its appearance? Robinson believes that scripture is the only suitable chisel while Henderson-Espinoza believes that lived-experience gives one artistic license.

One is the Loneliest Number

Henderson-Espinoza doesn’t like labels or categories and prefers to speak of “orientations,” “sensibilities” or “lived experience.”

Robinson, however, pointed out that while lived experience is an important part of our faith walk, giving it primacy only serves to undermine the Christian foundation.

“I think lived experiences is just another way of saying ‘anecdote’, it’s something you’ve experienced personally. Of course, it matters, of course everyone’s lives matter, and their anecdotal experiences matter. What I would suggest is that lived experiences don’t trump evidence and what we see quite often is that people put their lived experiences over the facts. I think we need to return to first principles if we want to solve problems.” (Robinson)

Sadly, in a postmodern world where truth is individually apprehended and emotionally canonized, anecdotes are all the evidence one needs to establish a worldview. Robinson is rightly concerned about making lived experience a sacrament of the church because when we do so Christianity is relativized, tolerance is absolutized, and the Body of Christ is fractionalized.

Unfortunately, we have moved on from a world where the veracity of ideas was confirmed only when the number of test cases or the n was significantly large. Today, truth only requires an n of 1. Is it possible that the unprecedented amounts of anxiety and depression our young people experience is the result of a culture that encourages them to create their own anecdote? Those of us who have already walked through the Three Dog Night of the soul already know the answer - one is the loneliest number you’ll ever do.

Jesus as a Trigger Word

Henderson-Espinoza appropriately emphasized the need to follow Jesus faithfully, but it is here that orthodoxy is distinguished from “wokeness.” It’s easy to generically encourage unity in Jesus but we cannot forget that He specifically asked, Do you think that I have come to give peace on earth? No, I tell you, but rather division (Luke 12:51). God desires that all be saved but that requires a complete understanding of why Jesus came, why He died and why He was resurrected. Jesus cannot just be the Life (experience) because He is also the Truth and the Way.

While both guests agreed that Christians should find unity in Christ, Henderson-Espinoza was often uncomfortable introducing Jesus into conversations with others.

I understand that words like sin, repentance and atoning sacrifice have a lot of cultural baggage. I accept the fact that for many people Christianity is just a synonym for old white Republicans. But when we classify the Word made flesh as a trigger word, or fear that confessing Jesus is Lord is a microaggression, then we are no longer Gospel messengers.

The Legacy of Ernest Scribbler

“I do think that we can cause linguistic harm.” (Henderson-Espinoza)

What is linguistic harm? Everybody wants to avoid it, but what is it? Is it disagreement? Is it hurt feelings? Or is it an excuse to allow your life thesis to go unchallenged?

Henderson-Espinoza knows that a crucial part of obtaining a PhD is defending one’s thesis. I suspect that they (Henderson-Espinoza’s preferred pronoun) didn’t believe the critiques they received from the thesis committee were meant to inflict linguistic harm but rather to confer ideological clarity. Unfortunately, many of the groups Henderson-Espinoza represents don’t embrace this view, and rather than take criticism seriously, accuse others of wielding deadly linguistic force. Robinson challenged the ability of words to do harm:

“I don’t think that words are harmful or violent in the same way that people seem to perceive them to be, but also I would suggest that a lot of the time the people being offended aren’t actually offended, they are offended on other people’s behalf…People often get offended on my behalf on things I would never actually consider to be offensive in any way shape or form and I find that quite patronizing actually.” (Robinson)

Socrates said an unexamined life isn’t worth living so if we allow our perceived identity to go unchallenged, we become one of the walking dead and our safe spaces become mausoleums for ideological zombies.

Ernest Scribbler, a fictitious character created by the Monty Python troupe, created a joke so funny that it was deadly. His killer joke was then appropriated by the allied forces as a lethal weapon against the Nazi aggressors.

Sadly, this amusing skit has taken on a new cultural relevance because language is now considered to be just as deadly. If you challenge somebody’s thoughts or ideas, or dare I say their truth, and they take their own lives, you are complicit in murder. Whatever happened to “sticks and stones can break my bones, but words can never hurt me?” Are we that fragile? Linguistic bullying is unacceptable but challenging ideas is essential. We want to encourage polite, respectful dialogue, but if ideas have consequences then they are not entitled to linguistic immunity.

“You say you don’t like labels but then you started off by saying your transqueer, latinX.”

Unfortunately, Henderson-Espinoza’s response did little to justify the labels.

“I think that I don’t know if there is anything that comes first other than me just trying to be faithful in the small things and trying to be intelligible in a world full of hypocrisy and contradictions, this is the best language I’ve come up with to try to make myself intelligible.” (Henderson-Espinoza)

Robinson further went on to express concern that the unity they both desire is impossible when theology is divided into categories.

“I think the problem with these different so-called theologies is the same as the problem in society, it’s inherently dividing people based on their individual characteristics…We cannot unify based on them.” (Robinson)

I found Henderson-Espinoza to be articulate, kind, and thoughtful, but I must admit I would never investigate their writings based on the identity portrayed online because those labels suggest an agenda rather than a thoughtful theological opinion.

I believe we are guilty of theological malpractice when we treat God like a patient with a donor card that grants us permission to harvest and then transplant the specific divine organs, we most need to treat our failing spiritual health. We engage in idolatry when we sign His death certificate, dissect Him into theological pieces, and worship His pickled remains.

“Theology is the study of God…It’s not about our personal identities. It’s about Christ. And the moment we put our self before Christ we are committing idolatry and that’s problematic for obvious reasons. It’s separating us from God; therefore, it is an evil. All of these theologies, queer theology, liberation theology, you name it, they shouldn’t exist. Theology itself is good enough.” (Robinson)

Clearly, we all experience God differently when He steps into our unique life situations, but we must resist the temptation to make Him conform to our experience. When we categorize theology as liberation, queer, black, etc. we end up creating a God with multiple personality disorder rather than a Father with a brood of diverse children.

The Limits of Tolerance

Interestingly, both guests agreed on the danger of toleration.

“I want to be a part of where communities of baptism mean something, and I think we’ve lost that in many respects in our attempt to be tolerant of everything.” (Henderson-Espinoza)

“Tolerance of everything is dangerous because we end up watering down our own values in order to appear more inclusive.” (Robinson)

I think the best definitions of tolerance come from the sciences. Engineers define tolerance as the maximum amount of deviation allowed before something becomes unworkable, unusable, or downright unsafe. The roundness of a tire can deviate only so much from a perfect circle before it becomes non-functional. In medicine, we encounter tolerance when the body requires increasing doses of a drug over time to achieve the same effect, a phenomenon most frequently encountered with opiates. If we accept these definitions, then excessive tolerance not only encourages the pursuit of a dysfunctional life but requires one to push the boundaries of reality further and further from the center.

We, therefore, need to ask ourselves how much theological toleration is allowed before Christianity ceases to be Christianity?

Identity theology makes unity impossible because unity can only be accomplished if there is a transcendent truth upon which we all agree. In a “woke” world, where all truth is relative, personally created, and vetted by personal feelings, society is pulled apart because tolerance is unable to withstand the centrifugal pull of postmodernism.

Tolerance merely forces us together and tells us it’s better to hold our noses at the stench of our neighbors’ beliefs rather than engage them in serious discussion. It is quite disrespectful of the views of others because instead of engaging ideas on the intellectual pitch it gives everybody a religious participation trophy. Tolerance becomes a “Coexist” bumper sticker which allows us to travel through the cultural neighborhood without having to get out of our car and help a neighbor who is suffering the consequences of his or her lifestyle choice.

We cannot fall asleep on the woke because new ideas will always pop up as culture changes and we need to be prepared to engage them with gentleness and respect.

“I’m grateful for the opportunity to be in dialogue with Calvin because I think we need more of these kinds of conversations if we are to live faithfully our witness of being followers of Jesus.”

We certainly need more conversations like the one modeled by Calvin and Robyn, but in the end we all need to have a come-to-Jesus moment. “Woke” ideologies will ultimately stand or fall based on who they claim Jesus to be. We can dialogue, ask for clarification, and debate ideas but at some point, the wheat will need to be separated from the chaff and the sickle that will be used will be Jesus’ own question - Who do you say I am? What will our answer be - social justice warrior, philosophical sage, or the Lamb of God who takes away the sins of the world?