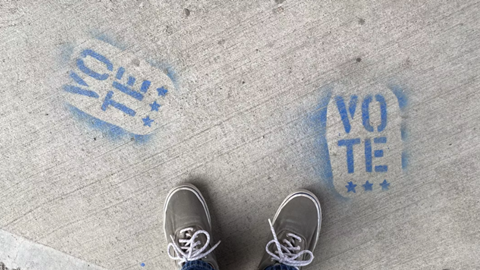 US elections and countercultural power

Following mid-term elections in the US, Erik Strandness explores what it would look like to operate from a perspective of God’s kingdom rather than man’s

Once again, the United States has endured another mid-term election. Positions of power were maintained in some quarters and lost in others, but the way in which that power will be exercised will remain the same. While these elections will certainly influence the way our country is run, we need to remember that Jesus will have none of it because he offers a kingdom that runs by a completely different set of rules.

Are you a king?

So, Pilate entered his headquarters again and called Jesus and said to him, “Are you the King of the Jews?” Jesus answered, “Do you say this of your own accord, or did others say it to you about me?” Pilate answered, “Am I a Jew? Your own nation and the chief priests have delivered you over to me. What have you done?” Jesus answered, “My kingdom is not of this world. If my kingdom were of this world, my servants would have been fighting, that I might not be delivered over to the Jews. But my kingdom is not from the world.”

Pilate asked Jesus if he was a king who should be feared. Jesus then drew the distinction between his kingdom and Pilate’s by explaining that if his kingdom played by the rules of the world, then he would have kicked Pilate’s butt long ago. Jesus made it clear that his kingdom operated by a completely different power dynamic. Ironically, Pilate then unleashed the power of God’s kingdom by applying the full force of Roman power by crucifying Jesus.

Pilate wielded the Roman hammer without appreciating the power of yielding to the nails. God’s greatest power play turned out to be a passion play; therefore, in obedience to our king we are called to bend a knee to a saviour and not raise a sword to the state. Jesus’ kingdom is not run by the majority, the courts or the government but by the poor, meek and hungry.

It is not influenced by special interest but rather those of little interest. It is not funded by super PAC’s but by the weak in spirit. It is not beholden to parties but to those who mourn. It is not the movers and shakers who are the leaders of God’s kingdom but rather the shaken.

“Blessed are the poor in spirit, for theirs is the kingdom of heaven.

“Blessed are those who mourn, for they shall be comforted.

“Blessed are the meek, for they shall inherit the earth.

“Blessed are those who hunger and thirst for righteousness, for they shall be satisfied.

“Blessed are the merciful, for they shall receive mercy.

“Blessed are the pure in heart, for they shall see God.

“Blessed are the peacemakers, for they shall be called sons of God.

“Blessed are those who are persecuted for righteousness’ sake, for theirs is the kingdom of heaven. (Matthew 5: 3-10)

Jesus turned the ruling structure of the world on its head, not by divine fiat, but by divine precedent.

But Jesus called them to him and said, “You know that the rulers of the Gentiles lord it over them, and their great ones exercise authority over them. It shall not be so among you. But whoever would be great among you must be your servant, and whoever would be first among you must be your slave, even as the Son of Man came not to be served but to serve, and to give his life as a ransom for many.” (Matthew 20: 25-28)

Christianity initially grew because of the suffering service of its adherents. For several centuries it had no political power, yet it continued to gain followers. Surprisingly, the blood of the martyrs became the seed of the church. It can be argued that when Christianity hitched its wagon to the Constantine cart, it went off the rails because power found in weakness does not gel well with a government that wants to flex its muscle.

When Christianity gains worldly power, it all too often tries to get Jesus to leave his embarrassing life of suffering service and become a poster boy for its political cause. God has always worked through that which the world considers foolishness, yet we seem intent on making him worldly wise.

Jesus told us that God’s power is found in weakness, yet we pat him on the head and obsess over electing more congressmen, appointing Supreme Court justices, and enacting more laws because deep down we don’t believe a word he said. Sadly, we promote Christianity as a way to do culture better rather than as a way to be countercultural.

Since we live in that difficult time between the already and the not yet of God’s kingdom, we cannot just remove ourselves from the world. We must still render unto Caesar what is Caesar’s and be subject to the authorities, but we must remember that we are also citizens of another kingdom where we render unto God what is God’s and obey God rather than men.

We have been saved by a God who did not wield a hammer but yielded to the nails. Maybe we could make more of God’s kingdom peek through if we practiced a bit more yielding and a bit less wielding.

So, if there is any encouragement in Christ, any comfort from love, any participation in the Spirit, any affection and sympathy, complete my joy by being of the same mind, having the same love, being in full accord and of one mind. Do nothing from rivalry or conceit, but in humility count others more significant than yourselves. Let each of you look not only to his own interests, but also to the interests of others.

Have this mind among yourselves, which is yours in Christ Jesus, who, though he was in the form of God, did not count equality with God a thing to be grasped, but made himself nothing, taking the form of a servant, being born in the likeness of men. And being found in human form, he humbled himself by becoming obedient to the point of death, even death on a cross. Therefore, God has highly exalted him and bestowed on him the name that is above every name, so that at the name of Jesus every knee should bow, in heaven and on earth and under the earth, and every tongue confess that Jesus Christ is Lord, to the glory of God the Father. (Philippians 2: 1-11)