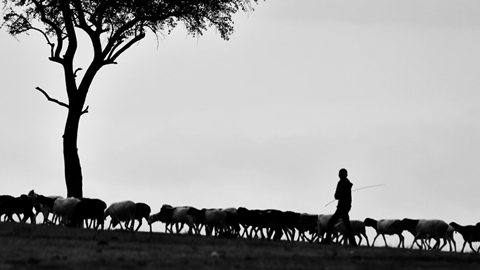 The faith of the shepherds: A Christmas reflection

As we approach Christmas this year, we once again remember and reflect upon the ancient stories of Jesus coming to Earth that we read in the New Testament. Through the biblical stories of Jesus’ incarnation we are invited, once again, to step into the Christmas story ourselves, to find our place in this miraculous narrative of God entering into the messiness of our world, taking on human form and living alongside humanity.

The invitation of Jesus is extended to us today, 2,000 years on from his birth, but the very first invitation to meet with the newborn king was somewhat different. For we read in the Gospel of Luke that the first people to receive the news of the birth of the Messiah were some unnamed shepherds going about their day-to-day work of looking after their sheep. These shepherds were the first people to be invited into the Christmas story, to meet with the baby Jesus and to encounter the presence of Immanuel; God with us.

For those of us reading the Nativity story today, we may not take too much notice of the radical nature of this first invitation to the shepherds, for shepherds today play an active and important role in our society. However, at the time of Jesus’ coming into the world, shepherds were at the very bottom of society’s ladder. They were the lowest of the low, often considered to be uneducated, dirty peasants who belonged out in the fields where there were no other people for them to encounter.

For on that first Christmas the shepherds responded in faith. And their faith is an example that we can look to, as we reflect on our own invitation into the Christmas story this year. As we rest and reflect upon the incarnation story of Jesus this Christmas, may we too recognise the invitation of Jesus, and may we too respond in faith, just like the shepherds.

“When the angels had left them and gone into heaven, the shepherds said to one another, ‘Let’s go to Bethlehem and see this thing that has happened, which the Lord has told us about.’” Luke 2:15

I imagine that the people who would have been most shocked to receive an invitation to meet with the long-expected Messiah would have been the shepherds. Surely, they must have thought the Messiah deserved visitors of a higher calibre! Would there not be kings or queens, emperors or landowners who would be more worthy of visiting Jesus? I can imagine that the invitation from the angels was one that they could hardly believe.

Yet the shepherds heard this great pronouncement of the newborn Messiah and they received the extraordinary invitation to meet with Jesus. And they said to one another “Let’s go!” The shepherds could have declined the invitation. They could have declared themselves unworthy of meeting the Messiah. But they choose to say yes to the invitation of Jesus. They had the faith to follow, to go and meet with their saviour, their Messiah, Jesus.

In fact, it actually says in verse 16 that the shepherds “hurried off”. They went in haste, not waiting around to see if the angels could find someone better to invite, not deciding whether they were worthy or not. They simply accepted the invitation, said yes, and went off to meet with Jesus.

As we reflect upon this story today, we too can often find ourselves in a place where, like the shepherds, we may not consider ourselves worthy of meeting with Jesus. Yet the example of the shepherds is a reminder that Jesus considers all of us as worthy of receiving his grace. Each Christmas is a reminder that we are invited to meet with the King of Kings once again. And, like the shepherds, we too must have the faith to follow; to say “Let’s go” and hurry off to meet again with our saviour.

“So they hurried off and found Mary and Joseph, and the baby, who was lying in the manger. When they had seen him, they spread the word concerning what had been told to them about this child.” Luke 2:16-17

Upon arriving at the manger in Bethlehem where Jesus was born, the shepherds beheld the Messiah who had taken on flesh and suddenly arrived in their corner of the world. Luke’s Gospel makes no mention of the shepherds doing anything else. There was no work to be undertaken, no task to be accomplished, no requirements to enter the presence of Jesus. They simply waited in his presence and beheld their saviour.

Christmas is often a time of tasks, where to-do lists and calendar invites can become overwhelming and all-encompassing. We so often remember our Christmas time as a season of doing. This is equally true when it comes to our faith! All too often, we can think that being with Jesus requires us to do certain works or tasks. We can come up with requirements and preconceptions, lists and tasks, when Jesus simply invites us to commune with him.

Like the shepherds, this Christmas we too can simply behold Jesus. We can come to him and rest in his presence, knowing that we don’t need to do anything. We can simply observe the miracle of his birth, recognise the gift of his presence and thank him for the invitation to commune with him for all eternity.

Faith to fear not

“But the angel said to them, ‘Do not be afraid. I bring you good news that will cause great joy for all the people…’ The shepherds returned, glorifying and praising God for all the things they had heard and seen, which were just as they had been told.” Luke 2:10, 20.

There are certain times in life when we move from being scared to being absolutely terrified. I don’t know about you, but I think being visited by an angel at work would be one of those occasions! As we read in Luke 2:9, when the shepherds are first visited by the angels, they are said to be “terrified”.

There are two main reasons why the shepherds would have been terrified. Firstly, they were met by angels when they were least expecting them. The shepherds were just at work, in the fields stewarding their flocks. And then, all of a sudden, their normal routine is disrupted by the arrival of an angel of the Lord and the heavenly hosts! Secondly, the angels came with a message which would have terrified them. It was an invitation not just to meet a newborn baby, but to meet God himself in human flesh!

Seeing that the shepherds were terrified, in verse 10 the angel gives them a command: “Do not be afraid.” This is perhaps easier said than done, but the shepherds offer us an example of great faith as they choose faith over fear, choosing to trust in God and continuing to follow his commands.

Fear is something that can easily entangle and take over our lives. Whatever fears you may be wrestling with this Christmas, at the heart of the Christmas message is the command to “fear not”. Through the miracle of Christ this can be a reality for you this Christmas. And, just as it was for the shepherds, we too can experience the true joy (v20) that comes from embracing the way of Jesus which leads us from fear to true and eternal peace.

Living with the faith of the shepherds this Christmas

This Christmas Jesus is inviting you to meet with him once again. The Christmas story is not just an ancient tale that we read about once a year. Nor is it simply a story that teaches us timeless truths. Rather, it is an ongoing invitation to meet with Jesus, experience his presence and live in relationship with him. And that invitation is extended to you afresh this Christmas-time.

This Christmas, have faith to follow Jesus again. Have faith to behold him and simply rest in the miracle of his arrival. And have faith to fear not. The arrival of Jesus is good news for you and your loved ones this year, just as it was for the shepherds 2,000 years ago.

Timothy James is a theological researcher and writer, and an undergraduate tutor at St Mellitus College, London. Tim is also the founder of Access Theology: a start-up organisation which is committed to equipping followers of Jesus and resourcing churches through the creation and distribution of accessible theological resources.