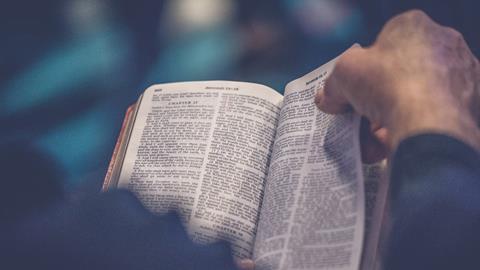 How should I read scripture?

In the past, the question of how one ought to read scripture would have been far easier to answer: one simply opens one’s Bible and reads. In the modern era, the options for reading scripture are greatly expanded: one can always read the traditional way – from a book. One could read it electronically, by way of an e-reading device, and there are also a number of free audio resources for Bible reading. In fact, the Bible is now available in picture, video or even graphic novel format.

However, even with all of these resources, there are different ways of reading the Bible. The proper application of reading strategies largely depends on the book one is reading and the style in which that book is written. The book of Revelation is vastly different from the rest of the Bible for the most part and it is not to be read as if it were the book of Genesis. The woman in the Song of Songs was no doubt meant to be beautiful. If one were to fail to read the book poetically, however, and read the descriptions of her literally, one would hardly be looking at a stunning example of feminine beauty! Nor is it enough to look at the poetic descriptions in a modern way. One must understand that the affectionate descriptions would have been taken as far more complimentary by a 10th century C.E. shepherdess in the Ancient Near East, than by a modern woman who did not share the cultural context of the woman being described.

Perhaps the appropriate starting place, then, is to realize that the Bible is not just a book – it is a library. The many books contained therein represent a number of different genres and sometimes these genres can be different within the same book. The book of Job, for instance, starts off with a narrative account and then it switches to a dialogue that is told in highly poetic terms and after that, it returns again to a narrative. The book of Isaiah is written in a prophetic style for the most part. Prophetic styles, just like poetic styles, are often not meant to be read literally. However, parts of Isaiah, such as chapter 6 through 7 and chapters 36 through 39, are written as narratives, and are more literally grounded. The reader, then, must be aware of what kind of style he or she is reading in order to understand what is being said.

Literalism and the Bible

People tend to sit in one of two uncompromising camps: either the Bible is entirely metaphorical/symbolic, or the Bible is meant to be entirely literal. Both of these camps operate under a misunderstanding of how ancient people thought and wrote. Literalism, for instance, often means to read something in a wooden sense, but no one does this across the board. When Jesus says “I am the vine” no one presumes that he is a plant that needs to be trimmed and watered regularly. Everyone understands that he is speaking in a symbolic sense. However, when the text talks about Jesus traveling to a town, most readers do tend to take that in a literal way. Even if a reader doesn’t think that Jesus did travel to that town, a reader can understand that the author is trying to say that a journey happened and that the author believes that this pilgrimage took place.

This does not mean that the text is meant to be read in a haphazard way, but neither does it mean that the text is not to be taken for granted. There are some matters of scripture that are clear, but there are other matters that are difficult to understand. If a person reads the Bible directly through, he or she will get a good idea of the story and what the text is seeking to communicate. The reader may or may not believe it, but can nevertheless understand what is being said. To really get at the heart of the matter requires much more skill, and also reliance, on those who have been studying the text for longer than the present audience.

Consider the Psalms. The Psalms are rich in poetry and the text should very rarely be read in a literalistic sense. The Psalmist does not believe that the trees are ever swaying side to side and clapping their branches together to celebrate God being king over the Earth. The Psalmist is also not literally having to learn how to swim because he has cried so much that he has drowned his couch with his tears. Like much of poetry, the text uses hyperbolic terms in order to make a point – often a very relatable point about sorrow and distress.

The Proverbs are another area that can often be misunderstood. Many people will treat the Proverbs as if they were ironclad promises. They are not. This can easily be seen when right next to each other in the Proverbs in 26:4-5 are two verses that talk about whether someone should answer a fool in his folly or not. The answer? Both. The person who reads Proverbs is meant to be a wise person who can discern when each is to be applied. In fact, like prophetic passages, the writer invites the reader to contemplate what is being said. The very act of contemplation will result in an increase of wisdom for the reader. Meditation on the passages improves understanding.

One example would be Proverbs 17:8. This passage says that a person who gives a bribe will likely succeed. It would be a mistake to say, then, that the author is telling the audience that they should offer bribes so that they can succeed. However, he does agree with the general principle that those who do use bribery often do get what they want. The author is making an observation on how the world works, and a discerning reader will eventually be able to spot the difference between observation and advice – sometimes called “description versus prescription”. This ability to identify observations on human behaviour and separate them from advice on how people ought to behave can save the reader a good deal of grief and confusion when characters or writers in the Bible are saying or doing things which are very apparently bad behaviour. Frequently the text is describing how a person or people behave, not telling the reader “go and do likewise”.

One popular Proverb says: “Train up a child in the way he should go and when he is old, he will not depart from it.” This passage is occasionally taken as a sort of divine promise, and Christians may be disappointed to discover that, having raised their child in the Church, the child still abandoned the faith. One must understand that this passage is not talking about instilling moral values in the child. Without question, a parent should do so, but the Bible does not guarantee that the child will always carry those values into their own adulthood (and gives a number of examples wherein children do the opposite). The Proverb in question actually means that if a parent raises a child according to their natural bent and according to the skills that they have, that child will carry those skills and abilities into adult life. This verse is not an ironclad promise. It is a generality.

Apocalyptic writing in the Bible

If any kind of passage is hard to read, it is the apocalyptic portions of the Bible. Apocalyptic writings are sprinkled heavily throughout the second half of Daniel and Jesus’ ‘Olivet Discourse’ in the synoptic Gospels. They can also be found among the thicket of prophetic books which cap off the Old Testament. The book of Revelation, however, is intensely apocalyptic from beginning to end. Unfortunately, most people who think about the interpretation of the book of Revelation think about books like the Left Behind series, or Hal Lindsey’s phenomenally popular books from the 1970s. All of these books lean heavily on a very modern methodology of interpretation, and do not demonstrate a grasp on how ancient writers communicated in their apocalyptic styles.

Revelation uses rich imagery that requires a Jewish knowledge to understand. While the book rarely quotes the Old Testament, it alludes to it multiple times. The book assumes the reader is familiar with apocalyptic literature from Jewish antiquity. If a reader does not understand the Old Testament, they will not understand Revelation. This choice to write in a highly symbolic way that would be familiar to Jewish scholars was intentional. The author could communicate points to his intended audience, but if the books were to be intercepted by enemies of the Church, the message would be lost on them. A convenience for the Church at the time it was written, but for a modern reader, familiarity with the Old Testament is key to understanding Revelation.

It is also good to get help from others. Many a Christian can baulk at the idea of seeking out commentaries or scholars to enhance their understanding. Christians have often been taught that a Bible and the Holy Spirit are all that they need in order to know what scripture is saying. However, this overlooks the fact that the Bible on the Christian’s knee is the product of thousands of years of copying, research and translation. It overlooks the fact that Christians attend sermons on a weekly basis to hear about scripture and its meaning. It is not holiness to think that one can interpret the Bible without anyone else at all. It is arrogance.

If a Christian wishes to gain the most comprehensive understanding of scripture possible, he or she should seek to read the works of the best scholars, including those who disagree with them, to get a good understanding of the text. The Holy Spirit has worked with a great body of believers up to the present time and it would be perilous to ignore them all. To the Church’s great fortune, resources for reading and understanding the Bible, its history and the culture in which it was composed are more abundant and available now than they have ever been before – and in many different formats from audio, to video, to written.

Nick Peters has mentored under apologists Michael Licona and Norm Geisler and currently attends seminary, pursuing a degree in philosophy. Nick has Asperger’s Syndrome, a high-function form of autism, which has become a guiding force in his ministry to disabilities within the Church. Nick’s apologetics focus is on the historical Jesus, biblical scholarship and evidence for the resurrection.