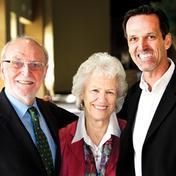 “Arguing against God’s existence is on a par with arguing against air, breathing it all the while”. So says the website of Sye TenBrugencatte who believes that Christians need to rediscover the power of ‘presuppositional apologetics’.

Our use of the laws of logic, mathematics, science and morality cannot be accounted for unless we believe in a God who guarantees our perceptions and reasoning is trustworthy in the first place.

Paul Baird describes himself as a “freethinker”. He debates whether he is obliged to believe in God when faced by Sye who argues that atheists are effectively “suppressing” the truth of God that is self evident - as described in Romans Ch 1.