Hans Kung vs Peter D Williams - Does the Catholic Church need to modernise? 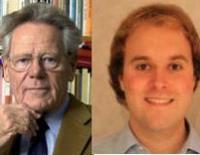 As Pope Francis enters his second year of papacy, Justin is joined by Hans Kung, one of the most influential and controversial Catholic theologians in the world.

He debates his radical liberalising ideas for the future of Catholicism with traditional Catholic Peter D Williams, including ordination of women, opening up Communion to remarried couples and Protestants.

For more on the Revolution in Rome www.premier.org.uk/rome

Book for Unbelievable? The Conference 2014 www.premier.org.uk/reasonablefaith