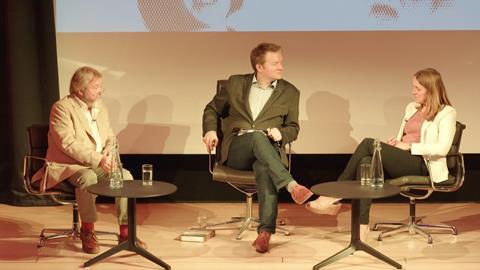 Atheists like Dennett are wrong about consciousness. Why I agree with Iain McGilchrist (even if we still disagree about God)

It was a great privilege to dialogue with Dr. Iain McGilchrist for season 4 of The Big Conversation hosted by Justin Brierley. Seated in The British Library, London, we were gathered in person for the first time since the start of the pandemic to discuss the question, Is there a master behind our mind?

Although we had travelled to London from opposite ends of the country (I had come from Oxford and McGilchrist from the Isle of Skye), we did not approach this question from opposite ends of the spectrum. McGilchrist’s new, two-volume work, The Matter with Things, took him ten years to write and is already being spoken of as a classic in the field of mind, matter and human consciousness. His thesis? That the reductionist materialistic view of human persons is wholly inadequate.

McGilchrist develops the thinking from his earlier influential book The Master and his Emissary and argues that the tendency to view people through just one very narrow materialistic lens is linked to the disproportionate influence of the left hemisphere over the right hemisphere in today’s culture. A greater influence of the right hemisphere, in contrast, would take a more holistic and embodied perspective, attending to the bigger picture, as well as to its constituent parts, and allowing imagination and intuition to flourish in order to properly tune in to all that is real.

Where I agree with McGilchrist

Since we both agree, along with many philosophers and scientists today, that non-conscious matter alone is insufficient to account for human consciousness, our discussion enjoyed a good deal of common ground.

McGilchrist made the astute point that materialistic explanations are frequently spoken of as self-evident and yet atomic physics highlights that we don’t even know precisely what matter is, let alone relying upon it to account for something so complex as what it means to be me or you.

Three perspectives on the brain and conscious mind were outlined by McGilchrist:

1. That the brain emits or gives rise to consciousness.

2. That the brain transmits consciousness a bit like a radio transmits a program.

3. That the brain permits a certain level of consciousness.

McGilchrist isn’t afraid to critique prominent atheist philosophers such as Daniel Dennett, who espouse the first view (often also called the ‘emergent’ view of consciousness), describing this view as ‘incoherent’ during the discussion.

McGilchrist himself is drawn more to the final view, describing consciousness as being ‘ontologically primitive’ - the primary and fundamental reality of the cosmos. In this view, physical matter is not the end-game of reality, but is rather a ‘phase’ of consciousness - a bit like water has different phases depending on whether it happens to be steam, liquid, or ice.

I was in agreement that the primacy of consciousness in the cosmos makes best sense of why conscious beings have arisen from within it. However, Christian theism takes this one step further, believing that this primary consciousness is personal as well as transcendent, and has a name, Yahweh.

The area of biggest difference between us was over the nature of the divine. I greatly appreciated McGilchrist’s honesty about finding the final chapter of his book - titled ‘the sense of the sacred’ - the most difficult to write and yet being convinced of its importance as the finale to the book. He writes and speaks about this in a captivating and beautiful way, ‘I certainly feel strongly that there is something very powerful, of ultimate importance and great beauty in the source of life and creativity that is behind this cosmos, expressed in its richness, complexity and responsiveness.’

McGilchrist takes a ‘panentheistic’ view - that all is in God and God is in all. This means that the universe and the divine are inextricably woven together and that in attending to a bigger perspective and to God, God himself comes more fully into being. At this point the conversation took a more theological turn as we considered the nature of God and the relation between the divine and the material world.

This raised the question for me of whether, under panentheism, God is somewhat beholden to the universe in order to reach His fullest sense of being? In contrast, under Christian theism, God was already fully complete as Father, Son and Holy Spirit, before anything material was realised. Life in all its forms exists as an overflowing act of love rather than being driven by any need for completion.

Why Jesus matters in this debate

It was clear to me that there is a strong synergy between McGilchrist’s embodied and holistic view of reality and some of the most important facets of the Christian faith.

Jesus is the ultimate embodiment of the divine or, as Paul wrote to the church in Colosse: ‘In Christ all the fullness of the Deity lives in bodily form’ (Colossians 2:9). The incarnation speaks of a God who sees the big picture of the full sweep of human history and yet entered in at a certain point, to be with us in real and tangible ways.

The resurrection of Jesus also reminds us that the eternal life offered through Christ is physical and embodied rather than a ghostly separation of body from soul. We know this because Jesus bodily rose from the dead, as the forerunner of all who follow after him. McGilchrist admitted to being more drawn to the metaphorical rather than literal truth of the resurrection. At this juncture I resorted to as much honesty and pragmatism as I could muster. At the end of life, are we going to survive the death of our bodies literally or metaphorically? There is, after all, a world of difference between the two.

During the audience questions (available as a bonus video when you subscribe to the newsletter), we traversed many topics from near death experiences to AI, to miracles, to degenerative diseases. A reminder that the topic of human consciousness is relevant not just to neuroscientists and philosophers, but to the whole of life.

McGilchrist’s contribution to this field is significant indeed. His books will be read for many decades to come. I hope they will help many to appreciate that reductive materialistic approaches leave us with a diminished view of humanity whereas several persuasive alternative views exist, to which thinking agnostics and atheists will feel able to subscribe.

We need more voices like McGilchrist’s in a world dominated by left-hemisphere tendencies to reduce, over-simplify and apply ‘black and white’ approaches. Instead, something as rich as human consciousness must be seen in full colour, and in all of its complexity and beauty.

Dr Sharon Dirckx is author of ‘Am I Just my Brain?’ and adjunct lecturer for OCCA

Watch Iain McGilchrist and Sharon Dirckx discuss ‘Is there a Master behind our Mind?’