Why Martin Luther's home church must remove its antisemitic statue

On a recent trip to Wittenberg in Germany, in preparation for a meeting next year to celebrate the 500th anniversary of the Protestant Reformation, I sat on the steps outside the Stadkirche, the parish church where Martin Luther preached, and wept.

As a Jewish believer in Jesus I have found few things more offensive than a statue on the outside of the church, where carved in a sandstone sculpture is a Judensau (Jew-pig) that mocks Jews, Judaism and the Jewish Messiah, Jesus.

It’s been there since 1305, and portrays a rabbi who looks under the sow’s tail, and other Jews drinking from its teats. An inscription reads “Rabini Shem hamphoras,” gibberish which presumably bastardises shem ha-meforasch” (the fully pronounced Name [of God]). The sculpture is one of many still remaining in Germany and is the most prominent. 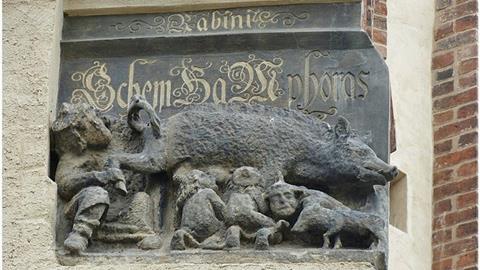 In his book Vom Schem Hamphoras (1543), Luther comments on the Judensau sculpture at Wittenberg, echoing the antisemitism of the image and locating the Talmud in the sow’s bowels: “Here on our church in Wittenberg a sow is sculpted in stone. Young pigs and Jews lie suckling under her. Behind the sow a rabbi is bent over the sow, lifting up her right leg, holding her tail high and looking intensely under her tail and into her Talmud, as though he were reading something acute or extraordinary, which is certainly where they get their [name for God].”

The sculpture continues to cause offence and defame Jewish people and their faith. It needs to be removed to another location so it is not publicly displayed on the external wall of the church, and properly housed and explained elsewhere. Otherwise Jewish people continue to experience the antisemitic power of such an abusive image, and their worst fears about the nature of the Christian faith are confirmed. If the Church is truly repentant over such images, it must take steps to remove them from such prominent display.

Not only is the sculpture an insult to Jewish people, but it offends common decency by its lewd portrayal of Jews suckling a pig and putting a hand up its rump. It also is an affront to a place of Christian worship which should be decorated with dignity and decorum, not obscenity and shocking anti-semitic images.

The Wittenberg Judensau continues to offend as a powerful and vivid portrayal of hate speech and antisemitism. The attempt to address this by placing an explanation and commemorative plaque beneath the sculpture in 1988 by sculptor Wieland Schmiedel beneath it is insufficient. The explanation states: “The true name of God, the maligned Chem Ha Mphoras which Jews long before Christianity regarded as almost unutterably holy, this name died with six million Jews, under the sign of the Cross.” I appreciate the fact that the church decided to do something to explain and express regret, but do not believe God died in the Holocaust, and this is again an improper use of the name of God.

If the Church is truly repentant over such images, it must take steps to remove them from such prominent display

Sister Joela Krüger, a member of the Evangelical Sisterhood of Mary, a Lutheran group, is leading the campaign for the removal of the sculpture. She toldChristianity Today: “The Judensau grieves people because our Lord is blasphemed. And also the Jews and Israel are blasphemed by showing such a sculpture. We don’t want to distance ourselves from Luther’s wrongs, but to identify, grieve, and ask for forgiveness.”

The Jewish community is rightly concerned that Christians are genuinely repentant over the issues. Rabbi Pinchas Goldschmidt, Chief Rabbi of Moscow and President of the Conference of European Rabbis, said: “Removing statues can be, on the one hand, symbolic. On the other hand, it might not be enough. The question is, to what extent the Protestant churches have gone through their history, liturgy, statements and religious texts to distance themselves from teachings which have elements of antisemitism.”

Today, as we celebrate 499 years since Luther’s launching of the Protestant Reformation it is time to remove this statue and replace it with something more honouring to the God of Israel. Let us hope and pray that by the time we celebrate the 500th anniversary next year, this, obscene, insulting, defamatory, blasphemous and antisemitic statue is no longer on the side of a church. It is time to bring dignity to this Christian place of worship.

Dr Richard Harvey is senior researcher with Jews for Jesus and former academic dean at All  Nations Christian College. He blogs at mappingmessianicjewishtheology.eu