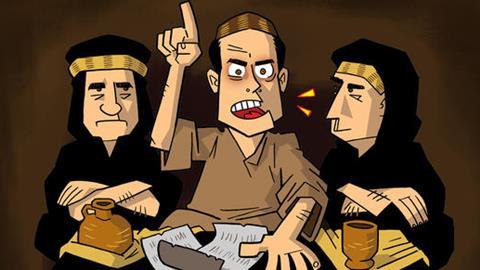 What has Christianity ever done for us?

If you are going to scoff at evidence, scoff big. This was the thought that flashed through my mind when the atheist philosopher AC Grayling challenged me during our debate on The Big Conversation to nominate “one thing, just one thing, that Christianity has introduced that doesn’t have some source, some parallel with previous and with other civilisations”. So might a geographer have been challenged to prove that the earth is not flat. So might an ornithologist have been challenged to prove that birds have feathers. The difficulty is not to muster evidence. The difficulty is rather the opposite: that the evidence is everywhere.

Yet precisely because it is everywhere, it can seem – like particles of the finest dust in the air – invisible. Most people are oblivious to the way in which the West’s Christian heritage has shaped modern education, healthcare, music, art, literature and the scientific revolution, to name but a few. Most significantly, when Grayling offers his own values, his own conclusions, as the yardstick by which the whole sweep of human civilisation is to be measured, he seems oblivious to the degree to which those views are the perspective of a liberal intellectual in 21st Century Western Europe and no less shaped and moulded by history than that of a Spartan, an Aztec or a Nazi.

Today, in the West, there are many who would agree with the beliefs of Heinrich Himmler that for humanity to claim a special status for itself, to imagine itself as somehow superior to the rest of creation, is an unwarrantable conceit. Homo sapiens is just another species. To insist otherwise is to cling to the shattered fragments of religious belief. Yet the implications of this view – which the Nazis, of course, claimed as their warrant for genocide – remain unsettling for many to face. Free thinkers who mock the very idea of a god as a dead thing, a sky fairy, an imaginary friend, can still piously hold to morals that palpably derive from Christianity.

In 2002, in Amsterdam, the World Humanist Congress affirmed “the worth, dignity and autonomy of the individual and the right of every human being to the greatest possible freedom compatible with the rights of others”. Yet this – despite humanists’ stated ambition to provide “an alternative to dogmatic religion” – was itself a statement of belief. Himmler, at any rate, had understood what license was opened up by the abandonment of Christianity. The humanist assumption that atheism and liberalism go together is just that: an assumption. Without the biblical dogma that God created humanity in his own image to draw upon, the reverence of humanists for their own species can’t help but seem mawkish and shallow.

Christ may have been born of a virgin, but Christianity itself hardly had a virgin birth. It emerged from a great confluence of traditions – Persian and Jewish, Greek and Roman. The faith has long survived the collapse of the empire from which it first emerged, to become, in the words of one Jewish scholar, “the most powerful of hegemonic cultural systems in the history of the world”. There is a paradox which even the most determinedly secular historian must acknowledge: Christianity was both the most enduring legacy of classical antiquity, and the index of its utter transformation.

Eusebius, the Palestinian bishop who, in the wake of Constantine’s conversion, wrote the first history of the Church, freely acknowledged that Christianity was a bloom deep-rooted in the distinctive soil of the Roman Empire. Furthermore, he considered it a mark of divine providence that Roman greatness brought together people from lands previously separated.

Christianity did not emerge out of nothing, but it did reconfigure the legacy of the Roman world utterly, and on a scale so revolutionary in its implications that its emergence ranks as the single most transformative development in Western history. To live in London, as Grayling does, is to live in a society still utterly saturated by Christian assumptions. Even to write about it in English is to use words shot through with evidence for this. ‘Religion’, ‘secular’, ‘atheist’: none of these are neutral. All, though they derive from the classical past, come freighted with the legacy of Christianity. Two thousand years on from the birth of Christ, it does not require a belief that he rose from the dead to be stamped by its formidable –indeed, its inescapable – influence.

But surely, it might be thought, humanity’s understanding of sexual desire ranks as something universal, something that has remained constant throughout history? No! Even the most cursory survey of Christian history reveals that nothing could be further from the truth. Today, we stand at an incalculable remove from the assumptions that governed sexual behaviour in the Roman Empire. The attitude we all have towards sex is a profound example of what Christianity has done for us.

Sex in Rome was above all an exercise of power. As captured cities were to the swords of the legions, so the bodies of those used sexually – be it in the vagina, anus or mouth – were to the Roman man. To be penetrated, male or female, was to be branded as inferior: to be marked as womanish, barbarian, servile. While the body of a free-born Roman was sacrosanct, those of others were fair game. Men no more hesitated to use slaves and prostitutes to relieve themselves of their sexual needs than they did to use the side of a road as a toilet. In Latin, the same word, meio, meant both ejaculate and urinate. To the presumptions that underlay this, however, Christianity brought a radically different perspective. “Do you not know that your bodies are members of Christ himself?” So Paul demanded of the Corinthians (1 Corinthians 6:15). How could any man, knowing his limbs are consecrated to the Lord, think to entwine them with those of a prostitute, becoming one flesh with her? Paul, however, by proclaiming the body “[a temple] of the Holy Spirit”(1 Corinthians 6:19) was not merely casting as sacrilege the carefree attitude of men in Corinth or Rome towards sex. He was also giving to those who serviced them – the bar girls, the painted boys in brothels and the slaves used without compunction by their masters – a glimpse of salvation. To suffer as Christ had done, to be beaten and degraded and abused, was to share in his glory. Adoption by God, so Paul assured his Roman listeners, promised the redemption of their bodies. “And if the Spirit of him who raised Jesus from the dead is living in you, he who raised Christ from the dead will also give life to your mortal bodies because of his Spirit who lives in you” (Romans 8:11).

Marriage: A picture of Christ and the Church

Paul, a Jew who took for granted that the only acceptable sexual relationship was one between a man and a woman, was recognisably a product of his cultural background, but he did not remain content with the teachings that he had absorbed as a student – and the consequences would reverberate through the millennia. Bodies, redeemed by the Spirit from sin, possessed in Paul’s vision of them, a rare dignity. Celibacy was a high calling; but it was “better to marry than to burn with passion” (1 Corinthians 7:9). A man and a woman, whenever they took to the marital bed, were joined as Christ and his Church. If the wife was instructed to submit to her husband, then so equally was the husband instructed to be faithful to his wife. Here, by the standards of the age into which Christianity had been born, was an obligation that demanded an almost heroic degree of self-denial. That Roman law – unlike the Talmud, and unlike the customs of most other ancient peoples – defined marriage as a monogamous institution did not for a moment mean that it required men to display a lifelong fidelity. Husbands enjoyed a legal right to divorce – and, of course, to force themselves on their inferiors – as much as they pleased. This was why, in its long and arduous struggle to trammel the sexual appetites of Christians, the Church always had marriage as the particular focus of its attentions. Divorce – except in the very rarest of circumstances – was prohibited. The bonds of a Christian marriage, mutual and indissoluble as they were, served to join man and woman together as they had never been joined before.

That marriage was a sacrament, a visible symbol of God’s grace, was a doctrine that it took the Church many centuries to bring most Christians to accept. The assumption that marriage existed to cement alliances between two families – an assumption as universal as it was primordial – did not prove easy to undermine. Only the great apparatus of law and social control with which the Latin Church equipped itself over the course of the Middle Ages enabled the old order finally to be subverted. No couple, so canon law decreed, could be forced into a betrothal, nor into wedlock, nor into a physical coupling. Priests were authorised to join couples without the knowledge of their parents – or even their permission. It was consent, not coercion, which constituted the only proper foundation of a marriage. Opening up before the Christian people was the path to a radical new conception of marriage: one founded on mutual attraction, on love. Inexorably, the rights of the individual were coming to trump those of family. God’s authority was being identified, not with the venerable authority of a father to impose his will on his children, but with an altogether more subversive principle: freedom of choice.

So distinctive was this Christian conception of marriage that in the lands beyond Christendom it invariably struck those who noted it as bizarre. From the very earliest days of Islamic scholarship, Muslims – whose license to enjoy a whole variety of wives and slaves was sanctioned directly by the Koran itself – had recorded the Church’s insistence on monogamy in tones of amused bewilderment. Yet Christians, far from feeling nonplussed by such contempt, had only been confirmed in their determination to bring proper order to the dimension of sexual appetites. Most repellent of all, a constant menace among pagans ignorant of Christ’s love and of his laws, was the proclivity of mortals for incest. The assumption of clan lords and patriarchs that cousins might legally be married off to cousins was one that horrified the leaders of the medieval Church. Only relationships sanctioned by canons were classed as legitimate. No families were permitted to be joined in marriage except for those licensed by the Church: ‘in-laws’. The hold of clans across Latin Christendom, as a result, began to slip. Ties between kin progressively weakened. Households shrank. Families became nuclear. Juliet eloped and was married by a friar to Romeo.

I did not get the chance, in my debate with Grayling, to ask him whether he is against girls being married off by clan leaders to their cousins. I suspect that he is. If so, then he may care to reflect on why he should be against it. Opposition to girls being married off to their cousins is not a cultural given; it is not something that emerges in different societies, across different periods of time, whenever intellectuals fall to pondering the issue. On the contrary. It is distinctively and recognisably the expression of assumptions that appeared – and can still appear –bizarre to those who live beyond the West: assumptions that would never have come into existence without the cultural, theological and legal matrix that is Christianity.

Watch the The Big Conversation between Tom Holland and AC Grayling on ‘History and Christianity’.