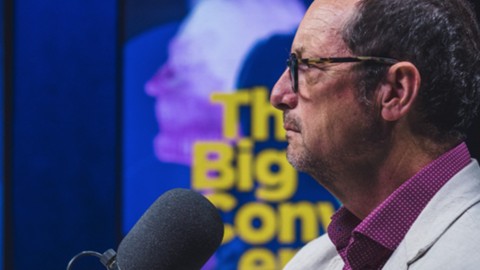 Was Jesus’ claim to be God an invention? Examining Ehrman’s arguments

As in his recent book Can We Trust the Gospels? (Crossway, 2018), Peter J. Williams argued that the many instances wherein the Gospels are demonstrably reliable sources of information about early first century Israel build a cumulative case for the presumption of reliability when it comes to their reports about Jesus.

‘I know there are problems’, said Williams, but the evidence suggests ‘we have a lot of the traditions of Jesus coming through.’ In light of the evidence, the simplest hypothesis is one of overall or general historical accuracy, and the burden of proof rests with the sceptic.

As a self-professed sceptic, Ehrman was happy to shoulder that burden of proof. That said, what may have surprised some listeners was the extent to which Ehrman was actually in agreement with Williams. Ehrman said: ‘I’m not arguing the Gospels are completely unreliable. The Gospels have historical information in them.’ Ehrman affirmed: ‘There’s a lot of material in the Gospels that absolutely go back to the historical Jesus.’ Crucially, towards the end of the show, Ehrman stated:

The irreconcilable deaths of Judas?

Ehrman focused on two arguments against the general reliability of the Gospels. First, he asserted that the presentation of the death of Judas in Matthew’s gospel ‘can’t be reconciled’ with Luke’s presentation of Judas’ death at the beginning of Acts. As Williams observed, Ehrman also said that ‘You can reconcile anything’; but the charitable way to interpret Ehrman’s argument is to take him as claiming that any and all harmonisations between Matthew and Luke’s accounts are implausible. Williams argues otherwise (applying the same charity to the New Testament writers as he applies to Ehrman), and in this historical judgement call, my sympathies are with Williams.

Ehrman’s second argument was that the Gospel according to John, written towards the end of the 1st Century, reports Jesus making several astonishing claims about himself that the earlier synoptic Gospels would surely have reported had their authors known about them. Ehrman concludes from the silence of the synoptic Gospels with respect to these sayings that they must have been invented.

Ehrman combines this argument from silence with his relatively late dating of all the Gospels to infer that other material about Jesus therein was probably invented. Against this, I don’t think the testimonial chains between Jesus and the Gospels (or their sources) are either as long or as tenuous as Ehrman suggests (I’ve written a critical review of these testimonial chains and a defence of earlier datings for the synoptic Gospels, in Getting at Jesus: A Comprehensive Critique of Neo-Atheist Nonsense About the Jesus of History). Also, arguments from silence are notoriously unreliable.

John’s Gospel presents several famous ‘I Am’ sayings, the most famous of which is probably: ‘Before Abraham was, I Am’ (John 8:58, ESV). Admittedly, Mark doesn’t report this saying. However, in a scene that’s not related by John, Mark reports Jesus’ apparently blasphemous answer to the high priest at his trial:

‘And Jesus said, “I am, and you will see the Son of Man seated at the right hand of Power, and coming with the clouds of heaven.” And the high priest tore his garments and said, “What further witnesses do we need? You have heard his blasphemy. What is your decision?” And they all condemned him as deserving death.’ (Mark 1:62-64)

‘When Jesus walked on the Sea of Galilee up to the fishing boat of some of his disciples, he responded to their fear at seeing him by saying, “I am [he]; fear not” (John 6:20) … In context, Jesus’ response to the disciples echoes the words of God in Isaiah 43 [verse 5] … In both Matthew and Mark, the same event is reported, with Jesus walking on the sea and saying to the disciples, “I am [he]; fear not” (Matt. 14:27; Mark 6:50). The Greek words here are identical in all three Gospels …’

Ehrman dates Mark later than I do, but one finds the same high Christology in the Epistle of James. This is significant because James is one of the oldest piece of literature in the New Testament, perhaps the oldest. It pre-dates the Jewish war and plausibly taking us back to the mid-late 40s AD. It’s highly implausible to think that Jesus’ original, Jewish followers would have arrived at a high Christology if Jesus himself hadn’t encouraged this.

As the agnostic philosopher Anthony O’Hear comments in Jesus for Beginners (Icon, 1993):

‘We should remember that his first followers were pious Jews, to whom the claims being made would have seemed blasphemous had they not been given strong reason to believe them – and where better than from Jesus himself?’

Ehrman’s example of President Trump getting many details right about his inauguration but the number of attendees wrong shows that it’s possible to display local knowledge and yet report false information. It doesn’t show that the Gospel writers probably reported false information. The independently verified local knowledge displayed by the Gospel writers suggests that they have an accurate handle on events in Israel in the early first century, establishing a presumption of reliability for their reports about Jesus.

To borrow an analogy from philosopher Lydia McGrew in Hidden In Plain View (DeWard, 2017):

‘If you sample a loaf of bread on both ends and at several points in the middle and find it good, it would be caviling to say that perhaps just the parts you haven’t tasted happen to be the moldy ones.’

‘skeptics of President Trump analyzed pictures of the inauguration and used these to demonstrate that he was exaggerating precisely because he was known to exaggerate. Because experience and outside sources indicated that, in the past, President Trump was known to employ hyperbole. As a result, his claims were under particular scrutiny. But no such precedent exists for the Gospels.’

Based on the evidence

In his opening remarks Ehrman asserted that Jesus was ‘the most important figure in the history of our civilization’ and that in getting to grips with Jesus he didn’t believe ‘in towing a party line one way or the other: If you’re an atheist you have to believe that, if you’re an historian you have to believe that.’ Rather, Ehrman said: ‘you have to decide what appears to be right, based on the evidence.’ I can say a hearty ‘Amen’ to that.