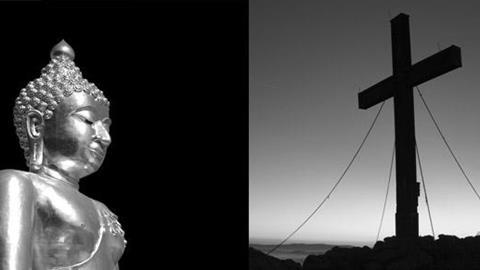 The Buddha can’t make sense of suffering. Jesus does.

How do we deal with the rising tide of anxiety and depression that is exacerbated by our digital age? This was the question posed to the Buddhist Rachel Holmes, and the Christian John Mark Comer, on a recent episode of Unbelievable?.

The title of the program was, The Ruthless Elimination of Hurry, but the debate quickly evolved into a discussion of how each faith tradition deals with suffering. Christianity and Buddhism both agree that suffering is a major problem but differ dramatically as to its source and solution.

One of the key tenets of Buddhism is that suffering is the result of our desire to cling to those things that are impermanent. Since everything changes there is no fixed identity and when we desire to take hold of these illusory things - even our own identity - we end up suffering. The Buddhist remedy is to recognize the impermanence of the world and make every effort to detach oneself from its grip. Christianity, on the other hand, declares that suffering is due to our inability to live in a way that is consistent with God’s design. Christianity encourages proper engagement with the world while Buddhism encourages detachment.

Buddhism vs Christianity on Suffering

I got the sense from Rachel’s remarks that she was more of a dabbler in the meditative practices of Buddhism than a true devoted Buddhist. I appreciated her transparency and willingness to share her struggles. I think her story better serves as a test case for which religious worldview provides the most satisfactory explanation and offers the greatest opportunity for healing.

The stark contrast between these two views of suffering was made palpably real to me by a group of men in the addiction treatment program at the Union Gospel Mission. My role at the mission was as a Christian educator. One day, as I was discussing the basic differences between Eastern religions, an astute young man pointed out that the reason he was in treatment was because he had been trying to detach himself from the suffering of the world by practicing chemical Buddhism.

He realized that there was actually no difference between the eightfold pathway and the six-pack pathway. He made it clear that he was already quite skilled at emptying his mind. He, however, recognized that detachment just made the problem worse and that true healing could only occur when he dealt with the suffering he had received, as well as the pain that he had caused. He needed to forgive and repent. It was engagement with the world that brought healing.

The ‘higher power’ missing from Buddhism

I find it fascinating that you don’t find Buddhist literature in drug and alcohol treatment programs. In fact, the most powerful program of all is the 12- step program where you are called to take responsibility for your actions but also to recognize that you cannot do it without a higher power.

Here are the 12 Steps as defined by Alcoholics Anonymous:

It’s easy to be a suburban Buddhist with some anxiety and depression but when your life has been destroyed by mental health issues, drugs, and alcohol, the only true solution is to fall into the arms of One who already knows your suffering, One who forgives your mistakes, and loves you despite your faults.

The One who suffered for us and with us

Jesus suffered and died on our behalf. We tend to concentrate on the died-for-our sins part and forget the suffering. If Jesus death was just a simple sacrifice for our sins then it would have been a lot less messy and just as efficacious if it was done on a Jewish altar. However, scripture tells us He suffered and died. He not only took away our sins but also mopped up the suffering left in its wake. We don’t just meet Jesus at the cross but are led there by a via dolorosa. It is because He suffered like we suffer that we can trust that He knows the way home.

Few have put it better than the late John Stott in his book The Cross:

“I have entered many Buddhist temples in different Asian countries and stood respectfully before the statue of the Buddha, his legs crossed, arms folded, eyes closed, the ghost of a smile playing around his mouth, a remote look on his face, detached from the agonies of the world. But each time after a while I have had to turn away. And in imagination I have turned instead to that lonely, twisted, tortured figure on the cross, nails through hands and feet, back lacerated, limbs wrenched, brow bleeding from thorn-pricks, mouth dry and intolerably thirsty, plunged in God-forsaken darkness. That is the God for me! He laid aside his immunity to pain. He entered our world of flesh and blood, tears and death. He suffered for us. Our sufferings become more manageable in light of his.”

Subscribe to the Unbelievable? podcast for conversations that matter every week

Dr. Erik Strandness is a neonatal physician and Christian apologist living in the Pacific Northwest. He has authored three apologetic books and blogs on a regular basis at www.godsscreenplay.com