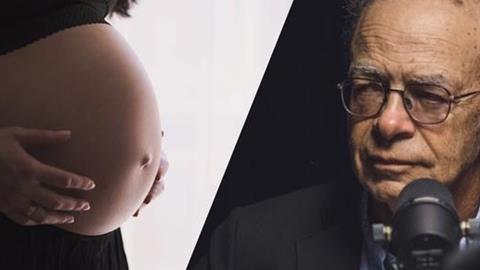 My child, Peter Singer and the rush to abort babies with Down’s syndrome

The figures sadden me as the decision to terminate is often made without a proper understanding of what life is actually like for a person with Down’s syndrome.

We found out in early pregnancy that there was a high chance our son would be born with Down’s syndrome. I was then pushed in to having a CVS which confirmed this to be the case. It was then assumed I would terminate the pregnancy - every medical professional I saw made the same assumption. Not one person at that stage spoke to me about what Down’s syndrome actually meant.

Despite the warnings, I went ahead and gave birth to my son Jamie. And I don’t regret it for one moment.

We’re now 18 years on from those conversations in the hospital and Jamie is happy, healthy and full of life. Last year he completed a Spartan race - a 5k course full of tough obstacles. He’s also swum in the Asian Special Olympics and trains three times a week. Oh, and he plays the drums and the guitar. Surely no one would suggest Jamie is not worthy of life? You might think that. But you’d be wrong.

Having listened to the recent debate between ‘moral philosopher’ Peter Singer and Andy Bannister as part of The Big Conversation on Unbelievable? I cannot sit back and let Professor Singer’s opinions go unchallenged.

Theologian Andy Bannister debated with Singer, among other things, Singer’s view that terminating a child because it has been found to have Down’s syndrome was okay.

People respect Singer’s opinion, because he is a University Professor. But his views fly in the face of the progress the world has made around diversity and inclusion.

During the debate, Justin Brierley asked Singer about the term ‘personhood’. Singer has used this term in the past, preferring it to describing someone as ‘human’. In my view, emotion, spirituality, personality and physicality makes us human. And each person with Down’s syndrome has emotions, spirituality, personality and a physical body. Apparently this isn’t proof enough of ‘humanness’ for our learned friend.

The dictionary definition of ‘Utilitarianism’ - the doctrine that Singer holds to - is that actions are right if they benefit the majority. Singer interprets this in a way which enables him to advocate for the destruction of minorities. To say this is blatantly wrong and immoral would be an understatement.

Interestingly enough research on the psychological and neurobiological processes underlying moral judgement throws some new light on to those who hold such utilitarian views. An illustrious team led by the University of Iowa’s Michael Koenigs and the University of Southern California’s, Antonio Damasio explored the tendency of certain brain-damaged patients to favour utilitarian moral judgments. They found that those who like to be utilitarian, may themselves be suffering from brain damage.

Make no mistake: some people want to eradicate people like my son from this earth. Singer isn’t the only person who holds views which will contribute to this end goal. The government in Denmark have said they want the country to be Down’s syndrome free by 2020.

Going back to those hospital appointments, is it any wonder that I was advised to abort my son? As long as people like Peter Singer are spreading their abhorrent views, we will not make progress on this issue.

It’s time to assert the human rights of people with Down’s syndrome. Look around. Our children, young people and adults are active members of the community. They are working, on television, the catwalks, the radio, in magazines, on billboards and shock horror, even speaking about their rights at the UN.

I don’t want Jamie to grow up in a world where he is regarded as a mistake. Or something that should have been detected and gotten rid of. Something that is a burden. I don’t want him to feel that he isn’t expected to achieve much, that he can’t contribute to society.

It is time the world started seeing Down’s syndrome for what it really is.