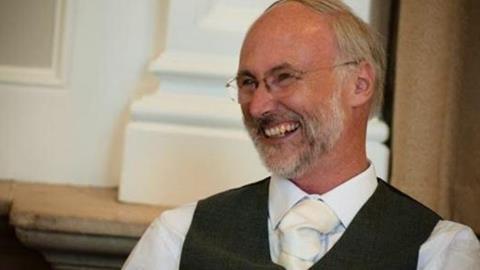 How cancer healed my Dad

From the outside, my father was living a rich and full life. He was married with four children, two grandsons and three more grandchildren on the way. He owned a big house in south west London, had a steady job and a great pension plan for when he planned to retire in 2021.  He loved classic cars and had a sizable collection of old bangers that didn’t start, much to my mother’s annoyance. He went to a good church, heard biblical preaching every week, and enjoyed lots of Christian fellowship. He knew many Christian truths and considered himself theologically sound.

But in his own words, he had become spiritually complacent, and far too invested in this life. He said he’d developed a ludicrous sense of entitlement to the life he lived, and although he enjoyed many aspects of a Christian lifestyle, his heart was far from God and living a life of true surrender. Nothing looked too bad from the outside, but he wasn’t living whole-heartedly for the kingdom. Jesus had become just a heavenly insurance policy for him, not the centre of his life. He bickered with his wife, collected car parts and watched too much TV.

And then, in January last year, after a couple of weeks of what seemed like bad constipation, he was diagnosed with stage four bowel cancer, aged 61. The tumour had broken through the bowel wall and already spread to his liver by the time we knew about it. He had surgery within two weeks and had his entire large bowel removed. Once he had begun to recover from this huge procedure, the plan was to try two different chemotherapy drugs to shrink the tumours on his liver before attempting to operate on that too.

We were all shell-shocked and totally devastated.

But Dad was not.

When he first heard the diagnosis, he instantly felt God put the words from Hebrews 13:14 in to his mouth, and he heard himself say to the consultant: “Here we have no lasting city, but we seek the city that is to come.” He described feeling a peace that transcended all understanding, literally guarding his heart and mind. And from then on, he woke up. Christ became everything again. The gospel was all that mattered. He began to seek a different city.

And so began a gruelling year of chemo, blood tests, scans and bad news. He made the best of it, taking chemo selfies, and maxing out on free cups of tea at the Maggie’s centre. But he endured months of aggressive treatment that made him feel horrendous, only to be told after each scan that he hadn’t responded to it and the cancer had spread further. He developed infections and bowel obstructions which hospitalised him at times, and when he was at home he spent most of his days on the sofa.

But curiously, he described it all as the best year of his life.

He certainly suffered, yes, but he said he wouldn’t have missed it for the world because of what it all did for his soul. It drew him near to God, into total dependence upon him, and many times during his illness he heard the Lord speak clearly to him.

It gave him an eternal perspective as he was confronted with his own mortality, and he began to think much more about heaven, and the world to come. He experienced time and time again that God keeps his promises, and that what he says in his word is true. He does give a peace that surpasses all understanding, He is with us in the Valley of the Shadow of Death and His grace is sufficient for us. Dad experienced that. It made him see that the only life worth living was one lived out wholeheartedly for the gospel, because only what you do for the kingdom lasts forever. That’s treasure in heaven. So he resolved to make every moment count for the kingdom, and to take every opportunity to contribute to someone’s journey in coming to know Jesus.

And in his last few months, he did exactly that. He shared the peace he had with every doctor, nurse and healthcare professional he met. During a hospital stay in which he suffered a kidney blockage, he was able to share the gospel with a patient in the bed next to him, who asked to stay in touch. He read the Bible and prayed with another. He took every opportunity he could to speak about God’s grace, and when he had the energy, he spoke at various church events and shared his experiences and insights. Let’s be clear, he was still my same old Dad. He still bought useless car parts, said tactless things, and watched reruns of star trek when he had the strength. But you knew more than ever before, that Jesus mattered most.

It drew him near to God, into total dependence upon him

My Dad was an optimist, and always hoped and prayed for healing. But when he was asked about it, he said that actually going to heaven would mean healing, that being in the presence of Christ, as a just man made perfect, would bring the greatest healing. He wanted to live, but he knew that earthly healing is only ever temporary anyway. Jesus’ friend Lazarus was gloriously raised but he still eventually died.

My dear Dad wasn’t healed. In fact, he died ten days after giving a final interview (watch it below). But I believe I witnessed a far more profound healing in his life than a good response to chemo.

His soul was healed of spiritual complacency, his eyes were opened afresh to the beauty of Christ, his heart beat with new vigour for the gospel. Every room in his house was opened to the Lord, he lived a life of full surrender and began truly seeking the city to come. The more ill he became, the more gracious, wise and christlike he seemed. He embodied 2 Corinthians 4:16, though outwardly he was wasting away, inwardly, he was being renewed day by day. God did much greater healing than fixing his liver. My parents’ marriage was transformed, I’ve never known them more in love than they were this last year. All the little niggles and frustrations in our family relationships evaporated, and many of his friendships were deepened and strengthened.

But don’t get me wrong. The joys and encouragements don’t take away the pain. Because of the cross, we know death has lost its sting, but it still hurts. And it was so very hard to watch my precious Dad suffer, and decline so quickly, as if aging in fast forward. One day, in the last few weeks, I saw him shuffling slowly on a zimmer frame from the bathroom back to the sofa, looking like he’d run a marathon, and I remember wondering, ‘how did we get here?’ Just a few days later, my brother and I carried him up the stairs to spend one last night his own bed before the hospital bed came. He sobbed all the way up the stairs. It hurt the most to see my Mum holding his hand on the very last day, asking him to stay with us just a little bit longer. Death is so awful. And no matter how much warning you have, nothing can prepare you for the profound finality of it and the utter separation. We still grieve deeply.

But God has, and continues to use my Dad’s illness and death to change and shape me. I would never have chosen this for him, for my Mum, for our family, but I wouldn’t undo it either. I’ve seen too many provisions, felt too much peace and seen too many answers to my prayers along the way to believe that God made any mistakes. My trust in the Lord’s sovereignty has only deepened, and my Dad’s words echo in my ears each time I struggle - ‘God’s got a perfect plan.  You’ve just got to grind out the plan.’

I would never have chosen this for him, for my Mum, for our family, but I wouldn’t undo it either

The pain of bereavement has also helped me to understand the gospel in a new way. Jesus said “I am the resurrection and the life. Whoever believes in me, though he die, yet shall he live.” My Dad lives!  Because of the cross, because of Jesus. I find it hard to picture, but losing Dad has made me think about heaven a hundred times more. He has lifted my eyes to the city that is to come. More than ever, I want to live for the things that last for eternity.  I want treasure in heaven.

I am so sad that I can’t see my Dad anymore. We miss him so much, he was the life and soul of our family and he leaves such a gaping hole. But I am so proud of who he became, of his humility, his pragmatic faith and his courage. I wish I could tell him how his funeral went, and laugh with him about what we wrote in the eulogy and how this random guy he never really liked turned up. But I know that one day I will see him again, standing tall and strong at the throne of God, cancer free, and we’ll spend eternity together. And as he said so often, in the context of eternity, this time without him now will feel like just the blink of an eye.

Sarah Phillips lives in Oxford and is a mother of two young boys. In her spare time she blogs on Christian living.