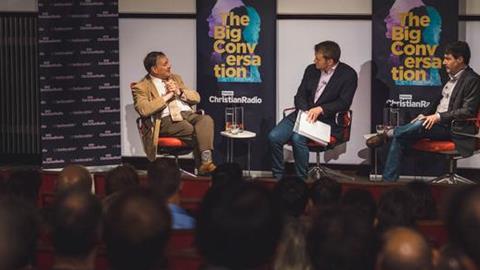 The popular Unbelievable? show, an apologetics and theology discussion program hosted by Justin Brierley on Premier Christian Radio, has just launched a new season of The Big Conversation. The video series showcases civil conversations between world-class Christian and secular thinkers, and Season 1 featured Jordan Peterson, Daniel Dennett and Peter Singer amongst others.

Alister McGrath needs no introduction. A professor of theology at the University of Oxford, he has a background in biochemistry and is known for his Christian apologetics and work on the relationship between science and religion. Bret Weinstein is rather less well known in the UK. He’s an evolutionary biologist, is recognised as a significant player in the so-called ‘Intellectual Dark Web’, and became infamous for his controversial departure from Evergreen State College.

We began with some introductions. Alister described how studying the philosophy of science helped to disperse his logical positivism – the view that only claims verifiable through empirical observation are meaningful – and this helped move him from atheism towards Christianity.  He opined that the “New Atheism” pioneered by Richard Dawkins is waning – it helped open up discussion but soon we became aware of the paucity of most New Atheist answers.

Bret agreed that New Atheism was overly simplistic, but was a necessary movement to make atheism more acceptable in society. One flaw was its labeling of people with faith as delusional. Bret believes each perspective has a validity not well-recognised by the other. Each has a “bitter pill” to swallow – more on that later, as it became a recurring theme.

Bret is an evolutionary biologist, but believes Evolution 101 is inadequate to explain human complexity. Humans are at the far end of the evolutionary continuum, and we have culture. We can store and transmit information. Bret sees Dawkins’ idea of memes as being crucial. Because children have a long period of development, it allows us to program them with our ideas, and over time evolution selects the most favourable belief systems – those with adaptive value.

According to Bret, this is certain. Religion is one of these belief systems, and Bret regards it as metaphorically true – a useful fiction that allows those who hold to these beliefs to out-compete those who do not.

Alister asked what Bret meant by religion, pointing out that we could easily be talking about ethics. He also noted that science has its own belief system. Bret agreed that the ‘bitter pill’ for materialists is that some faith is required to do science. His job is to minimise faith and metaphorical truths. Alister agreed that science is at times very provisional and tentative. We can’t prove our most cherished beliefs.

Does the Bible have answers for modern problems?

The discussion moved to the postmodern conception of truth. Bret thinks believing whatever you like a la carte is nonsense. We need a coherent set of beliefs, like religions, which contain much wisdom. But there is a huge problem. Religious texts are not designed to be consistent – interpreters such as clergy are required to dispense a coherent narrative.

In the past, this has worked successfully, but the church no longer has the authority to control religious text. The world is in crisis, and our religious texts can no longer help. Much is no longer relevant, parts are immoral, and they don’t tell us how to deal with new tools we come up with. E.g. the Bible doesn’t tell us whether we should enrich uranium!

Alister agreed that the Bible must be interpreted in the light of today. Every reading of the Bible is embedded in a cultural context, and we must recognise this and draw on past cultural readings – but at the same time ensure we are not locked into a reading of Scripture rooted in the past. Christianity does have the capacity to make sense of it all. Science helps us understand how, religion with why.

Alister quoted C.S. Lewis’ well known saying: ‘I believe in Christianity as I believe that the sun has risen: not only because I see it, but because by it I see everything else’.

Bret is of the opinion that religion can’t lead us through the uncharted waters we face today.  There is great urgency to stop the battle and obtain new tools for doing what we need to do. We need new wisdom, and violating the sacred is necessary. Unfortunately, religious texts have a plan interwoven to compete against other populations, and that isn’t sustainable. We have to step away from evolutionary competition, take evolution out of the driver’s seat, and start cooperating. How can we give the maximum number of humans a beautiful planet to live on?

Alister admired such noble aspirations, but noted that evolution doesn’t allow for ethical imperatives – the empirical doesn’t lead to the normative. He also playfully suggested that what Bret is proposing amounts to a new religion of sorts - a charge which Bret denied.

Was being Christian an advantage in the 1st Century?

There were some great questions asked after the discussion.  One of the best was when someone ask what the evolutionary benefit of following Jesus in the first century was? Clearly, not much. Bret thought this was merely survivor bias – there are lots of belief systems out there, and some sneak through out of luck.

I’m not sure how this answer fits with his idea that religion has adaptive value – perhaps he means over the much longer term? Alister added that religion gives the social benefits of solidarity.

Another question asked how important a belief in God was, rather than just believing in the right moral framework. According to Bret, the deity is a ‘hack’. If people believe that God is always watching to prevent wrongdoing, it ends up making people behave better than they would otherwise. But, an ethical system isn’t watching you.

Bret added that there are such things as absolute wrongs, which is interesting.

Do we need to update?

Someone commented that revering Scripture privileges writers from 2000 years ago, rendering current thinkers less influential, even though current thinkers have a better grasp of today’s problems. Alister didn’t see this as an issue. Christian writers articulate how we should interpret Scripture for today’s issues, just like Calvin saw that the underlying problem behind the ban of usury in the Old Testament was exploitation, and allowed for charging of interest if done fairly.

Bret thinks there is an issue. The path forward is not clear, and it’s scary: the rate of change is unprecedented. We must update our sacred texts – our current tools are too powerful and the population too high. He is pessimistic about humanity surviving the next 200 years.

It was a fascinating discussion, very ably hosted by Justin as usual, although perhaps it was almost too polite.

Alister is a gentleman, and very generous and positive in his responses. However, I felt he could have pushed Bret further in some of his assertions, but chose not to.

I enjoyed Bret’s perspective, and felt he had fascinating ideas to share. It was a little puzzling however, as Bret seemed to have some strong ethical beliefs, and yet did not acknowledge them to be metaphorical truths produced by evolution in the same way that he believes religion is. Perhaps he is well aware of this, and even though they are fictions, regards them as useful ones that will help save the planet.

I did leave with the impression that Bret was promoting a quasi-religious view that has elements in common with Christianity – that humanity has a problem, we need saving, and other ways are inadequate to deal with the problem.

Bruce Blackshaw is an Christian philosopher from Australia who blogs at philosophicalapologist.com