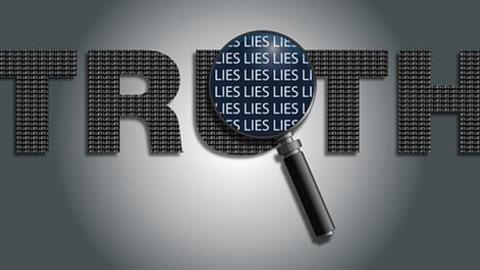 8 signs you’re confusing YOUR truth with THE truth

1. You only read/watch what you already agree with.

The books/blogs you read – or videos you watch – fit in with your existing worldview and serve simply to confirm your own prejudices. You deliberately stay away from anything that might challenge you. You start to unfollow people who post things on Twitter and Facebook that you disagree with. This is telling.

When we truly feel comfortable with what we believe, we can happily consider contrasting or conflicting views. If you’re so sure you’re right, then why do you shy away? There’s a chance that you’re strengthening the foundations of a belief that you’ve built upon the sand.

2.  “People who disagree with me are stupid!”

Psychologically, when we don’t want to be challenged by something, we need to convince ourselves that it is ridiculous. We need to alienate it and dispose of it. So we start using extreme words like stupid or irrational, which help us distance ourselves from the challenge. This is where terms like Magic Sky Clown and Jewish Zombie come from.

By reducing a worldview ‘ad absurdum’, we don’t need to worry about its potential truth. We wrap ourselves in protective labels.

3. You get angry with those who disagree.

You swear at or shout down people in conversation, or walk away from a discussion. You convince yourself that your anger is righteous because their viewpoint is immoral, but is that really true? Anger is what happens when we don’t feel in control and try to re-exert our own power in a situation. It’s an emotional response, not an intellectual one. It’s a sign that you’re out of your depth, that you don’t know everything.

People sure of what they believe and confident of its truthfulness tend to remain calm in conversation. “I get angry ‘cos they’re stupid!” you might say. See bullet point two.

4. You use words like ‘rational’ and ‘logical’ and ‘free-thinking’ to describe yourself.

These words are like verbal placebos. They create a pleasant feeling of security in us without actually proving us to be any of those things. However, calling yourself logical and rational doesn’t somehow magically transform all your ideas into logical, rational ideas.

5. You deliver statements as though they are questions.

But you’re not really looking for the answers. A question such as ‘How could God allow so much suffering’? is a good question, but it doesn’t automatically follow that he wouldn’t. The answers to these questions are hard, of course, but they’re out there, if only you’re prepared to look.

Have you considered that maybe you’re using the question to shield yourself from the answer?

6. You use ad hominem attacks.

When you fear that someone ‘on the opposing side’ is more knowledgeable in their viewpoint, or you run out of your own arguments, you try to undermine them by criticising their moral character or appearance. Looking to devalue what someone has said because of something you don’t like about them is a common trick, but totally dishonest. It also commits the genetic fallacy, but I’m probably an idiot for saying that.

7. You quote famous people, without being able to back up their arguments.

Dawkins, Hitchens, Bertrand Russell. In place of delivering your own ideas and thoughts, you simply quote something that one of your heroes has said. The problem is that you find it much more difficult to build on those sound bites when pushed. An example of this would be ‘You’re an atheist when it comes to Zeus. Atheists just go one God further’. How would you respond when informed that this is a joke, not an argument? What’s your follow-up argument?

A quote from an atheist is not in itself an argument for atheism. We all need to be careful that emotive, persuasive language doesn’t replace actual reasoned argument.

8. You never really critique your own beliefs.

Attacking, ignoring or sneering at other viewpoints is often a way of deflecting attention away from yourself. Sadly, despite what we’d like to believe about ourselves, most people in our society aren’t won over by reasoned, rational arguments, but by advertising.

Are your reasons for believing what you believe genuinely rational and considered, or are they simply a verbal manifestation of how you feel? And are your motives for rejecting other worldviews equally rational, or does the idea of a God who has more power than you simply create a negative emotional reaction, which you then reject? Does it disrupt your desire for autonomy, or conflict with your trust that you are in control?

If you do any of these eight things, you may be confusing your intellect with your emotions. How we feel is not always a good gauge of truth. The truth doesn’t always underwrite our feelings, but often wounds them.

How will you deal with that? What do you want? Your truth? Or the truth? Because the truth might be better than you think.

Drew Wilmot is a Christian author and speaker