Irish women and children enjoy better health than the English and Welsh, and low abortion rates is part of the reason -  but crossing the red line into despatching humans by abortion will backfire on women.

If you are Irish – stop and think at this crossroads and look for the good way.

Unintended after-effects linked to abortion include:

Emotional and mental harms to women are more common, even in women who were previously emotionally well. Prof David Ferguson (a pro-choice atheist) has shown this. Suicide risk is raised so teenagers were 6 times less suicidal after birth than before - but 4 times more suicidal after abortion than before.

I’ve had personal experience of this. Maisie (details changed) sighed at my doctor’s desk and said, “I had the abortion 50 years ago – but I think of the baby every day. Can I ever be forgiven?” Maisie did find forgiveness from Jesus Christ and her mental health improved.

Women’s lives are at higher risk of death for 10 years after abortion – even after early abortion - compared to after giving birth. Suicide, murder, fatal accident and stress induced strokes are the main causes.

This chart compares women’s mortality rates after a first pregnancy, ended by birth or abortion, from 180 days to the 10th year after: 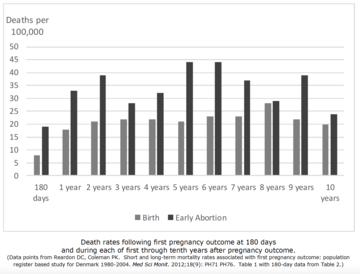 Abortion harms relationships. I knew a man who left a note saying it was his partner’s abortion of their child which caused him to hang himself. As relationships break-up under abortion stress the woman is left with triple trouble:

Infection in the reproductive organs happens to 1 woman in 10 after abortion (according to Royal College of Obstetricians and Gynaecologists). Pelvic Inflammatory Disease (PID) can follow infection, so that sex hurts. Pain “as bad as it can be,” was reported by 1 in 4 British women during and after abortion. PID can block her tubes which can provoke a life threatening ectopic pregnancy. Infertility can also follow abortion due to infection, blocked tubes, ectopic pregnancies and damaged organs.

5. Premature birth in the next children

Premature birth, caused by previous abortion risks brain damage, disease and death of the baby - whether using the abortion pill, pessary or surgery.

Vulnerable teens and women have been especially at risk of abusedue to disastrous policing of the British abortion law by Parliament, police and professionals.

Recently I heard of two English GPs bullying a pair of teenagers into abortions which neither they nor their parents wanted. Coercion to abort was experienced by 64% of women in a US study. Why should Ireland fare any better?

These charts compare women’s death rates after multiple births or abortions. (Adjusted for the year of woman’s birth, age at last pregnancy and number of exposures to each of the other pregnancy outcomes) 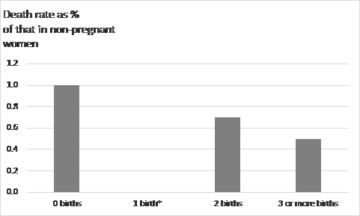 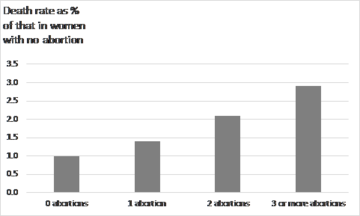 The heavenly Father pleads through the Good Book, “If you deal with each other justly, do not oppress the fatherless [unborn humans with no Dad], the widow [created by abortion when her partner walks off] and do not shed innocent blood; then I will let you live in the land I gave your forefathers. But look, you are trusting in deceptive words … So, I will bring an end to the sounds of joy and gladness in the streets for the land will become desolate.”(Jeremiah 7: 5-8, 34)

Ireland needs to shower their parents and babies with long-term love and support not a policy of despair.

Dr Mark Houghton is a writer and broadcaster, married with 3 children and a member of the Royal College of General Practitioners. He is also the co-author of Pregnancy and Abortion Your Choice (Malcolm Down Publishing)