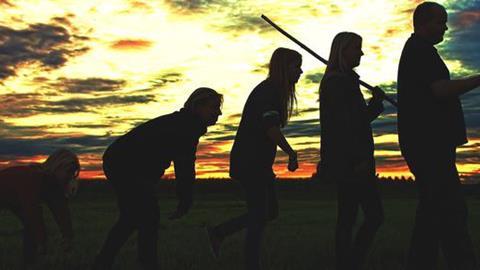 10 questions to ask Christians who believe in evolution

1. If the Bible was your only source, would you ever suggest that Jesus Christ used evolution?

It’s hard to find any biblical evidence for evolution.

2. Why do you believe rocks containing thorns are millions of years old?

Genesis teaches that physical thorns came into existence after God cursed the ground as judgement on Adam’s sin, and will be removed when the curse is removed, so why do you believe rocks containing fossil thorns are millions of years old, before mankind existed in the evolutionary timetable?

We have personally collected these from Ordovician, Carboniferous, Permian, and Cretaceous rocks.

3. Why would you believe that Jesus the Creator used such processes to create the world, and then hypocritically declared it to be “very good”?  (Genesis 1:31)

Evolution is a process of death, disease, struggle and starvation, none of which are regarded by God or man as good.

4. Why would God use a process which favours the strong over the weak?

Evolution is a process of survival of the fittest at the expense of the unfit. Why would Christ, who is all wise and all good, deliberately make anything unfit, since that is neither clever nor good.

5. How do you reconcile the truth of God’s word with millions of years?

If you believe the Genesis 1 narrative is ‘true’, but actually took millions of years, where are you going to put such long ages without making the Genesis sequence of events unbelievable and impossible, e.g. plants created on Day 3 needing to wait millions of years for their Day 5 pollinators and seed dispersers, (insects, birds and animals)?

6. At what point did humans become humans?

If God stamped his image on some already evolving hominids, were they miraculously transformed into human beings with the potential for eternal condemnation if they didn’t obey God? Surely, they would have been better off left alone?

If the creation of Adam and Eve as one man and one woman is not historical reality, but merely a moral story imposed on ‘evolution from animals’, why did Jesus base his teaching on marriage by using Genesis 1 & 2 as literal history?

9. If evolution is true, then why didn’t God simply tell us that?

Given that Christ is the Creator who is the Truth, and since as God he cannot lie (Numbers 23:19) and His word is truth (John 17:17), why would this same Christ take millions of years to evolve the world, then tell us he created it all in six days? (Exodus 20:11)

10. What would the Apostle Paul make of the theory of evolution?

The Apostle Paul teaches that sin and death came into the world through the actions of only one man, Adam (Romans 5:12-20), so only one actual man Jesus had to die to pay the penalty of sin. (1 Corinthians 15:17ff) How can this be if the events described in Genesis 3 are not real history, but just a moral story imposed on our ape like ancestors?

Premier Christianity magazine is committed to publishing a wide range of Christian opinion on a variety of subjects. Click here to read an alternative viewpoint.