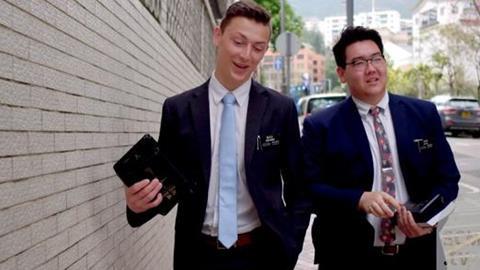 10 questions to ask a Mormon

I once sold encyclopaedias. I had a sample volume, richly bound, with examples of articles from different sections of the complete set, and a fold-out, life-size illustration of the whole set to lay out before prospective customers. I could talk about the quality of the product, the essential and comprehensive nature of the contents, and the long-term value of owning the books. Had I been asked in-depth questions about the articles, however, I could not have answered. I was expert in the product, not in the content.

When young Mormon missionaries knock your door they are like the encyclopaedia salesman. They know their product, their message, but their knowledge and understanding have no depth. Even older, more experienced Mormons you might meet don’t really know what it is to confidently negotiate their faith. Don’t make the mistake of expecting too much of them. Instead, ask these basic questions that cause them to think:

Mormonism teaches that what Christians think of as salvation, dwelling with God eternally, is a privilege won by striving for worthiness. This is achieved by following the ‘Plan of Salvation,’ what they call, ‘God’s Plan of Happiness,’ You begin with becoming a Mormon and working through the requirements of the plan. But Jesus said, “I tell you the truth, whoever hears my word and believes him who sent me has eternal life [present possession], and will not be condemned [future hope]; he has crossed over from death to life.” (John 5:24). Mormons teach a gospel of works. Christians believe a gospel of grace.

2. What hope do you have of eternal life?

The typical answer to this question is, “I hope when the time comes I will be found worthy.” Don’t underestimate the power of your quiet but confident confession of faith when faced with someone’s uncertainty. As Christians we can have certainty because we know salvation is not down to us. As Paul taught: “By grace you are saved, through faith…not of works.” (Ephesians 2:8-9).

3.Why are so many Mormon teachings not found in the Book of Mormon?

The Book of Mormon claims to contain “the fullness of the everlasting gospel”. But it doesn’t teach Celestial (temple) Marriage, the Mormon priesthoods, Father, Son, and Holy Spirit as three separate gods, man’s pre-mortal existence, men becoming gods, sacred temple ordinances or vicarious ordinances such as baptism for the dead.

4. Why are there no maps in the back of the Book of Mormon?

5.Why is the ‘open canon’ of Mormonism closed?

Mormonism teaches the canon of scripture is not closed. This explains the addition of the Book of Mormon and other Latter Day Saints (LDS) ‘scriptures’ on top of the Bible. And yet ‘scripture’ has not been added to the LDS canon for over a hundred years. The current LDS prophet, Russell M Nelson, is the 17th to hold the office. The vast majority of these prophets (14 of 17) have added nothing to the ‘open canon’ of the LDS Church. Why is this?

6. Why is an open canon necessary?

If the Book of Mormon does contain the fullness of the everlasting gospel, and makes up for a corrupted Bible as Mormons claim, why does it need to be added to?

7. Why do Mormons continue to use the King James Bible?

Joseph Smith produced his own ‘inspired translation’ of the Bible. If the Bible has has passed through so many corrupt translators’ hands as to not be reliable (as the LDS Church teaches) then why don’t Mormons use the Joseph Smith Translation?

8. Why does the Book of Mormon contain extensive, word-for-word quotes from the King James Bible?

27 of 239 chapters are directly lifted from the King James Bible. They teach that the Bible has been corrupted as it has come down to us through ‘profane hands’, yet The Book of Mormon even contains the italicized words that were added into the KJV text by the translators in the 16th and 17th centuries.

9. Why do Mormons encourage people to pray about the Book of Mormon?

Mormons will often ask Christians to pray and ask God if the Book or Mormon is true. But the Bible teaches us to test every truth claim by, “examin[ing] the Scriptures daily to see if these things are true.” (Acts 17:11) and Paul taught Timothy, “Scripture is able to make you wise for salvation through faith in Jesus Christ. All Scripture is God-breathed…that the man of God may be competent, equipped for every good work.” (2 Timothy 3:15-16).

10. Why are Mormon temple ceremonies secret?

Mormons will say they are not secret but sacred. The truth is that Mormons are sworn to never discuss temple ceremonies outside the temple. Prospective members cannot know what goes on in the temple until they enter it. Yet Jesus said, “I have said nothing in secret” (John 18:20) and Paul insisted he had “given up secret and shameful ways,” instead “setting forth the truth plainly.” (2 Corinthians 4:2)

Michael Thomas is the chairman of Reachout Trust. For more information visit reachouttrust.org