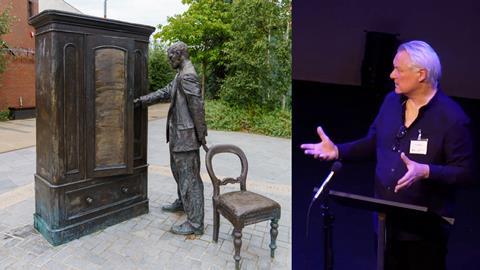 Northern Irish artist Ross Wilson BEM talks about his remarkable sculpture The Searcher, which is based on the character of Digory Kirke who, in ‘The Magician’s Nephew,’ creates a wardrobe made from a magical apple tree. Modelled on CS Lewis as he was in 1919, the sculpture seeks, in the words of the artist, to capture the “great ideas of sacrifice, redemption, victory and freedom for the sons of Adam and the daughters of Eve” that lie at the heart of the ‘Chronicles of Narnia’. This talk was originally given at a CS Lewis symposium called Now We Have Faces On 3rd November, which was hosted by The CS Lewis Group at Ulster University in coordination with English at Ulster.

For more talks from Now We Have Faces: https://www.youtube.com/channel/UCjaoVaQAdjdVFIFenlZVg-g

+ For our Premier Unbelievable? Live events

+ Support the podcast from the USA

+ Support the podcast from UK and rest of the world