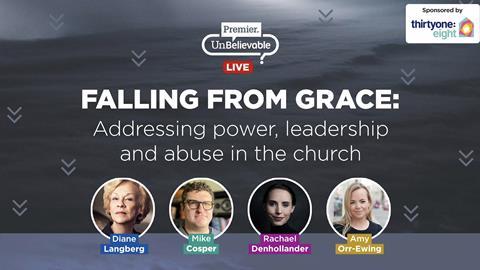 Live Event: Falling from Grace: Addressing power, leadership and abuse in the church

A series of leadership scandals have rocked the evangelical church in recent years. Celebrity pastors with large platforms have fallen, leaving a trail of abuse survivors in their wake.

Posthumous revelations of sexual abuse by Ravi Zacharias led to the collapse of RZIM. Prominent Hillsong leaders Carl Lentz and Brian Houston stepped down following allegations of inappropriate behaviour. The full story of the rise and fall of Mark Driscoll’s Mars Hill church has been heard around the world.

What does this reckoning mean for the megachurch ministry model? How do we ensure the voices of survivors are heard? What must the church do to repent and be transformed?

This online Unbelievable? Live event, hosted by Justin Brierley, features a significant panel of speakers with time for audience Q&A:

Amy served as Senior Vice President of RZIM until revelations about its founder Ravi Zacharias led to its closure in 2021. Amy will give her perspective on what went wrong at the heart of the global apologetics ministry.

Rachael is a former gymnast who was the first woman to publicly accuse USA Gymnastics doctor Larry Nassar of sexual assault. Hundreds more survivors of abuse came forward, leading to his imprisonment. Rachael now advocates as an attorney and public speaker for abuse survivors in the secular and church world.

Mike Cosper, Presenter and Producer of The Rise And Fall Of Mars Hill podcast

Mike is director of podcasts for Christianity Today. He is presenter of the phenomenally popular ‘Rise and Fall of Mars Hill’ podcast, charting the events and church culture that led to the implosion of Mark Driscoll’s megachurch ministry.

Diane is a Christian psychologist and international speaker working with trauma survivors, caregivers and clergy around the world. She is the author of ‘Redeeming Power: Understanding authority and abuse in the church’.

We are not responsible for the content of external sites