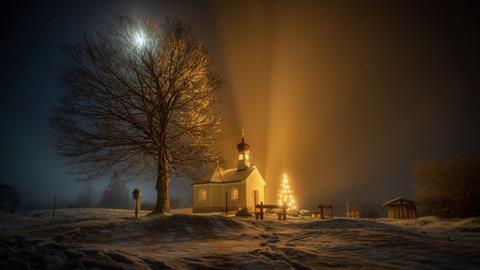 Church service cancelled on Christmas day? Mine will be our last…and I wouldn’t miss it for the world

As Christmas falls on a Sunday this year, Bethel McGrew explores what that might mean for many Americans

Are you going to church next Sunday? For many English Christians, this might seem like a silly question. But for Protestants on my side of the pond, it’s been a real poser. You see, here in the states, when we think of ‘Christmas morning’, we don’t necessarily think ‘church’. We’re more likely to think ‘family’, ‘food’, and ‘opening presents in jammies’ first. But this year, Christmas morning happens to fall on a Sunday morning. For American churches that don’t already have a built-in custom of Christmas worship, like Catholics, this has forced them to make a delicate decision.

The New York Times ran a feature interviewing a cross-section of conservatives and liberals, offering a range of opinions on the controversy. It turns out that even conservatives are divided amongst themselves. Southern Baptist leader JD Greear chose to close his church, believing it would be ‘pharisaical’ to make his congregation feel pressured to attend. He believes space must be left for ‘exceptions’, also pointing to the fact that his church closed for most of 2020. Greear’s allusion to COVID is telling, as a similar post-pandemic mentality is undoubtedly playing a role in the decision-making process for many churches.

Meanwhile, vigorously making the opposite case, Kevin DeYoung believes Christians should be more excited to gather for a Christmas Sunday, not less. Why waste the chance to sing carols we only get to sing once a year? By staying home in our jammies, are we perhaps silently implying that Jesus might not really be ‘the reason for the season’?

Now, I’ve been reading all of this as an Anglican. And as good fellow Anglican readers know, we already have a Christmas Eve tradition of nine lessons and carols, which is celebrated as a long prelude to a regular Mass. This is how my own little Midwestern parish has marked Christmas in years past. We were poor and tiny, with no choir to make it grand, but it was solemn and lovely in its little way. I prided myself on being able to do a perfect impression of a choirboy for the acapella first verse of the traditional opening carol, ‘Once in Royal David’s City’. After a long, full night, my family would go home full of Christmas spirit. Then we would sleep in on Christmas morning, guilt-free.

That’s what we thought this year would be like too. Not long ago, my folks and I were chatting amongst ourselves, debating whether we ought to go to service again on Christmas morning, just because it was a Sunday. We supposed we probably should. It felt like a bit of a chore, but it was probably something we should do.

Little did we know that in a matter of weeks, we wouldn’t be flipping a coin to decide if we were going to church on Christmas Sunday. We would be planning for it as our little parish’s very last service.

For a host of complicated reasons, our existence as a church has hung by a slim thread for years. We are the only Anglican parish in a town where low Protestants and Catholics make up the majority of the Christian community. To make it more awkward, our humble one-room schoolhouse building is nestled in a poor, run-down corner of town – quite literally on ‘the wrong side of the tracks’. If a new soul wanders in of a morning, he’s as likely as not to be a drug addict.

Attendance was already declining when we arrived in the mid-90s to breathe a bit of new life into it. My mother became the organist and I became one of the only parishioners under the age of 64. I was baptized at age 5 and confirmed at age 7. It felt like our priest, Fr S, was just waiting to see my confirmation through before he passed away. After that came a small rotation of replacement priests, before one of our own, Mr C, felt the call and quietly rose to become ‘Fr C’.

For over 25 years, I have hardly missed a Sunday at this church. And on those weeks when I did beg off due to fatigue, school or work, I have always felt a little twinge of guilt. No, Mass wasn’t a thrilling affair. Not only did we have no choir, eventually we didn’t even have acolytes to assist Fr C. He quietly performed all the tasks of the Mass himself. Until, one day, he couldn’t.

How might I have gone about going to church this year differently, if I had known? Maybe I would have taken better care of myself on Saturdays so that I could be refreshed and ready to give God my whole-hearted focus on Sundays, instead of shutting my eyes through the sermons. Maybe I would have gone out of my way to thank the few folks who are still left for everything they’ve done to keep the place afloat. Maybe, some weekdays, I would have brought my microphone and recorded a few hymns with the lovely acoustics. Or maybe on a sunny day, I would have just sat quietly, meditating on the crucifix over our altar, enjoying the light as it streamed through our couple of hanging bits of stained glass.

We always think about what could have been. What we might have done. We always chide ourselves for not planning, even when we’ve had our whole lives to plan.

I just missed Advent IV this year, because I was ill and couldn’t make it home in time from the town where I now live and work. I knew it wouldn’t have been an especially remarkable Advent IV. I knew it would have been tinged with all the awkwardness and sadness that comes with the territory of things coming to an end. Still, it was the second-to-last service we’ll ever have, and I wanted to be there and I couldn’t be.

Next week though, God willing, I will be. Next week, it will be Christmas. Our last Christmas. And I wouldn’t miss it for the world.

Bethel McGrew (formerly known by her pen-name Esther O’Reilly) is a widely published social critic, with bylines in outlets including The Spectator, The Critic, World Opinions, National Review, and First Things. She keeps up a Substack at Further Up and tweets @BMcGrewvy.